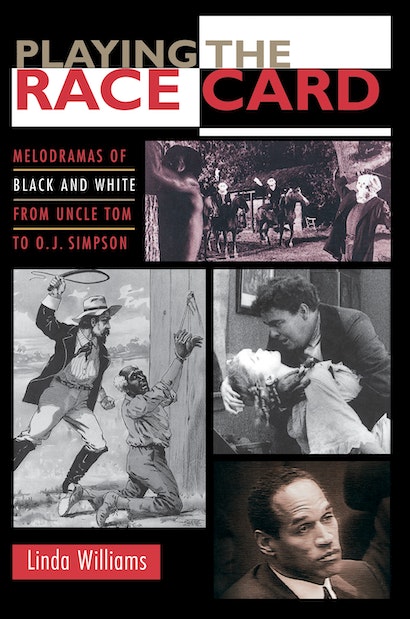 The black man suffering at the hands of whites, the white woman sexually threatened by the black man. Both images have long been burned into the American conscience through popular entertainment, and today they exert a powerful and disturbing influence on Americans’ understanding of race. So argues Linda Williams in this boldly inquisitive book, where she probes the bitterly divisive racial sentiments aroused by such recent events as O. J. Simpson’s criminal trial. Williams, the author of Hard Core, explores how these images took root, beginning with melodramatic theater, where suffering characters acquire virtue through victimization.


The racial sympathies and hostilities that surfaced during the trial of the police in the beating of Rodney King and in the O. J. Simpson murder trial are grounded in the melodramatic forms of Uncle Tom’s Cabin and The Birth of a Nation. Williams finds that Stowe’s beaten black man and Griffith’s endangered white woman appear repeatedly throughout popular entertainment, promoting interracial understanding at one moment, interracial hate at another. The black and white racial melodrama has galvanized emotions and fueled the importance of new media forms, such as serious, “integrated” musicals of stage and film, including The Jazz Singer and Show Boat. It also helped create a major event out of the movie Gone With the Wind, while enabling television to assume new moral purpose with the broadcast of Roots. Williams demonstrates how such developments converged to make the televised race trial a form of national entertainment.


When prosecutor Christopher Darden accused Simpson’s defense team of “playing the race card,” which ultimately trumped his own team’s gender card, he feared that the jury’s sympathy for a targeted black man would be at the expense of the abused white wife. The jury’s verdict, Williams concludes, was determined not so much by facts as by the cultural forces of racial melodrama long in the making. Revealing melodrama to be a key element in American culture, Williams argues that the race images it has promoted are deeply ingrained in our minds and that there can be no honest discussion about race until Americans recognize this predicament.

Linda Williams is Professor of Film Studies and Rhetoric at the University of California, Berkeley, where she directs the Film Studies Program. She is the author of Hard Core: Power, Pleasure, and the Frenzy of the Visible and Figures of Desire: A Theory and Analysis of Surrealist Film. Her edited volumes include Viewing Positions: Ways of Seeing Film and, with Christine Gledhill, Reinventing Film Studies.

"Williams makes the best theoretical case for descriptive representation for marginalized groups to achieve democratic equality. Her review of democratic theory is both exhaustive and masterful."—Katherine Tate, Annals of the American Academy of Political and Social Sciences

"It seems like a long leap to make 'from Lillian Gish to . . . Leonardo Dicaprio and from Uncle Tom to Rodney King,' but in this dazzling, benchmark work . . . Williams does it with panache and enormous insight. . . . This is a vital contribution to American studies as well as film and race studies."—Publishers Weekly

"But the real elegance is in her thinking. . . . [Williams's writing impresses] wherever melodrama lands, it brings the same set of concerns, an Playing the Race Card is at it protean best when it is tracing these from medium to medium."—Lisa Kennedy, Village Voice

"For any honest discussion about race relations in America, [Williams] argues, we must first acknowledge the indeterminate influence of melodrama. Conscientiously researched . . . this insightful book is essential for academic libraries and students in film studies."—Library Journal

"In her intellectually rousing book, Playing the Race Card, Williams find the root of [melodramatic] characterizations throughout American popular culture. . . . Such images, she argues, continue to feed attitudes of racial empathy and enmity. . . . With its thought-provoking analysis and textbook scholarship, Playing the Race Card is a . . . passionately crafted book. But Williams greatest contribution may be liberating a discussion of race from the incendiary rhetoric and polemics that accompany such a discourse. She creates a new dialogue about how popular entertainment has fostered racial sympathy as well as mistrust, and how those images still shape us today."—Renee Graham, The Boston Globe

"[Williams] dispenses with the cant and silliness that tangles much academic talk about racial matters. . . . Steeped in the details of text and context, she invites the reader to see familiar works in fresh ways. Williams's achievement is to recapture the complexity of our tangled racial history without sanitizing racism."—Jonathan Rieder, New York Times Book Review

"Williams offers a fresh and insightful exploration of some of the roots of the American racial dilemma. . . . Well written and persuasively argued."—Choice

"A work that is extremely valuable to historians who wish to enhance the sophistication of their own thinking about teaching with film and other visual media. . . . I believe the author succeeds at what she sets out to do. In such a large, sweeping, and ambitious book as this, that is high praise indeed."—Alecia P. Long, H-Net Reviews

"This book would be valuable just for its scholarly insights, sharp contextual readings, well-selected illustrations, and imaginative genealogy of melodramatic practices across various eras. What gives it special urgency is that by locating those moments when new media (print, film, TV, video) were shaping new ways of conceiving race, Williams creates a moving picture of racial melodrama in the United States that manages to connect the polemic of Uncle Tom's Cabin to the . . . televised O. J. Simpson murder trial"—Kurt Eisen, American Literature

"Broad and brilliant, a combination rare in serious books these days, Playing the Race Card argues persuasively that melodrama has profoundly affected American attitudes toward race over the last century and a half. . . . Williams's success is to spell out exactly how the melodramatic imagination of our popular culture shapes how we live and understand race in America and how these stories make as well as narrative history."—Grace Elizabeth Hale, The Historian

"Playing the Race Card possesses all the boldness, high intelligence, and far-reaching revisionism one has come to expect from the author of the brilliant Hard Core and other path-breaking work in film studies. Linda Williams here insists on the general importance of the melodramatic mode to our understanding of the United States' ongoing racial predicament. Her arguments are extremely compelling, not least because she executes them with such thoroughgoing smartness and prodigious learning."—Eric Lott, University of Virginia

"Linda Williams's book is a beautifully written, meticulously researched, and conceptually lucid engagement with the genres of painful feeling that organize racial fantasy in the United States. It joins the works of Michael Rogin, Eric Lott, and Ann Douglas as a major statement about the founding conventions of representation and cross-racial encounter in the U.S. twentieth century."—Lauren Berlant, University of Chicago

"A tour de force of cultural analysis. The subject of Playing the Race Card is at once urgent and entertaining. Linda Williams's book is poised to do for film studies what Toni Morrison and others have so famously done for American literature: to reveal the ghost in the machine, the role of 'race' in the making of American popular culture."—Susan Gillman, University of California, Santa Cruz

"A strikingly accessible book that makes a timely appearance, now that discussions about race and representation have developed a heightened immediacy. Elegantly written and meticulously researched, this book combines scholarly rigor with clarity and insight."—Valerie Smith, University of California, Los Angeles