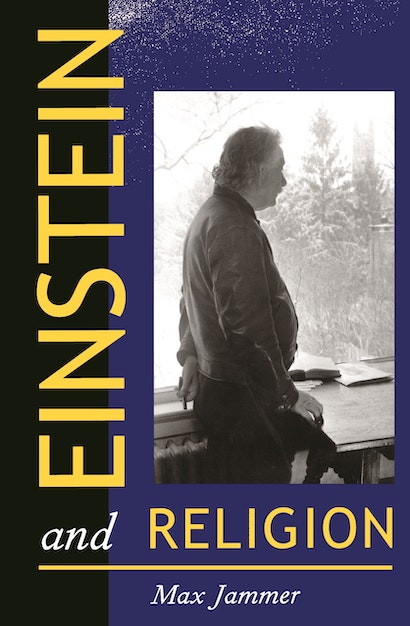 The philosophy of religion and the quest for spiritual truth preoccupied Albert Einstein — so much that it has been said “one might suspect he was a disguised theologian.” Nevertheless, the literature on the life and work of Einstein, extensive as it is, does not provide an adequate account of his religious conception and sentiments. Only fragmentarily known, Einstein’s ideas about religion have been often distorted both by atheists and by religious groups eager to claim him as one of their own. But what exactly was Einstein’s religious credo? In this fascinating book, the distinguished physicist and philosopher Max Jammer offers an unbiased and well-documented answer to this question.


The book begins with a discussion of Einstein’s childhood religious education and the religious atmosphere — or its absence — among his family and friends. It then reconstructs, step by step, the intellectual development that led Einstein to the conceptions of a cosmic religion and an impersonal God, akin to “the God of Spinoza.” Jammer explores Einstein’s writings and lectures on religion and its role in society, and how far they have been accepted by the general public and by professional theologians like Paul Tillich or Frederick Ferré. He also analyzes the precise meaning of Einstein’s famous dictum “Science without religion is lame, religion without science is blind,” and why this statement can serve as an epitome of Einstein’s philosophy of religion.


The last chapter deals with the controversial question of whether Einstein’s scientific work, and in particular his theory of relativity, has theologically significant implications, a problem important for those who are interested in the relation between science and religion. Both thought-provoking and engaging, this book aims to introduce readers, without proselytizing, to Einstein’s religion.

Max Jammer is Professor of Physics Emeritus and former Rector at Bar-Ilan University in Israel. He is the author of a number of treatises on the foundations of physics, including Concepts of Space, which contains a preface by Albert Einstein, and The Philosophy of Quantum Mechanics, which was read in draft by Paul Dirac and Werner Heisenberg. For his publications, most of which have been translated into several languages, Jammer has received numerous awards, among them the prestigious Monograph Prize of the American Academy of Arts and Sciences. In writing Einstein and Religion, Jammer used as his sources the Einstein Archive at the National and University Library in Jerusalem and the library of the Union Theological Seminary in New York.

"It is surprising that so little scholarly attention has been paid to [Einstein's] religious views. . . . This is a compelling, long overdue treatment of a neglected topic."—Publishers Weekly

"Jammer's fascinating and scholarly account of Einstein's personal attitude toward religion explores the emergence of his 'cosmic religion'. . ."—Choice

"Jammer is an excellent guide to the religious impact of Einstein's life and thought."—Greg Peterson, Christian Century

"A superb three-part survey that deals with the role of religion in Einstein's personal life; his philosophy of religion; and finally the effect of his physics on theology, the most brilliantly entertaining section of Jammer's book."—Meir Ronnen, The Jerusalem Post

"Jammer . . . shed[s] light on Einstein's often ambiguous views of religion, beginning with his early religious training and following his evolution to the idea of an impersonal God. [He] takes pains to clarify widespread misinterpretations of Einstein's spiritual views."—Leigh Fenly, San Diego Union-Tribune

"I can strongly recommend this beautifully written and accessible book."—Andrew Pinsent, Physics World

"One emerges from this scholarly and readable book with a new appreciation of the uniqueness of Einstein's spirit."—Gerald Holton, Philosophy of Science

"Max Jammer's is the first systematic historical account of Albert Einstein's religious views. . . . In the writing of this thoroughly researched and instructive book, Max Jammer has done the theological and scientific community a great service. Furthermore, he has made a significant contribution to the ongoing dialogue between science and religion."—Rufus Burrow, Jr., Encounter

"No other work offers as broad an account of Einstein's views on the relationship between science and religion or brings together all of the different facets of the topic in one short, easily accessible account. Einstein and Religion also offers a badly needed critique of some of the many misinterpretations and misuses of Einstein's views. Professor Jammer is a noted scholar, science historian, and philosopher with the credentials to write authoritatively on this subject."—David Cassidy, author of Uncertainty: The Life and Science of Werner Heisenberg