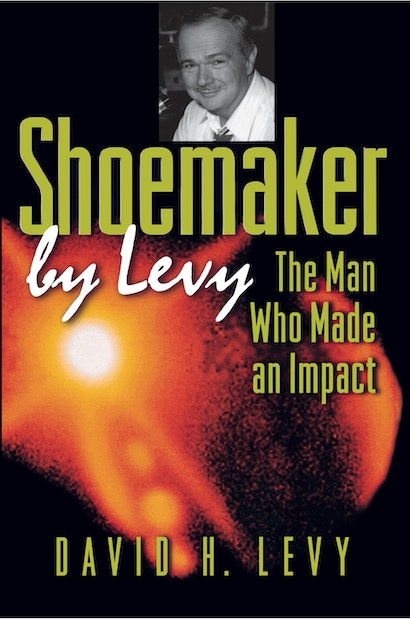 It was a lucky twist of fate when in the early1980s David Levy, a writer and amateur astronomer, joined up with the famous scientist Eugene Shoemaker and his wife, Carolyn, to search for comets from an observation post on Palomar Mountain in Southern California. Their collaboration would lead to the 1993 discovery of the most remarkable comet ever recorded, Shoemaker-Levy 9, with its several nuclei, five tails, and two sheets of debris spread out in its orbit plane. A year later, Levy would be by the Shoemakers’ side again when their comet ended its four-billion-year-long journey through the solar system and collided with Jupiter in the most stunning astronomical display of the century. Not only did this collision revolutionize our understanding of the history of the solar system, but it also offered a spectacular confirmation of one scientist’s life work. As a close friend and colleague of Shoemaker (who died in 1997 at the age of 69), Levy offers a uniquely insightful account of his life and the way it has shaped our thinking about the universe.


Early in his training as a geologist, Shoemaker suspected that it wasn’t volcanic activity but rather collisions with comets and asteroids that created most of the craters on the moon and most other bodies in the solar system. Convincing the scientific community of the plausibility of “impact theory,” and revealing its power for penetrating mysteries such as the extinction of the dinosaurs and the timing of the Earth’s eventual demise, became Shoemaker’s mission. Through conversations with Shoemaker and his family, Levy reconstructs the journey that began with a young geologist’s serious desire to go to the moon in the late1940s. Sent by the government to find a way to harvest plutonium, Shoemaker instead found evidence in desert craters for what became his impact theory. While he never became an astronaut, he did become the first geologist hired by NASA and subsequently set the research agenda for the first manned lunar landing.


After a series of victories and setbacks for Shoemaker, the collision of Shoemaker-Levy 9 with Jupiter provided the most convincing proof to date of the role of impacts in our solar system. Levy’s explanation of the scientific reasoning that guided Shoemaker in his career up to this dramatic point — as well as his personal portrait of a man who found white-water rafting to be an easy way to relax — sets these fascinating events in a human scale. This biography shows what Shoemaker’s legacy will be for our understanding of the story of the Earth well into the twenty-first century.

David H. Levy has discovered twenty-one comets, eight of them using his own backyard telescope. Science Editor for Parade magazine, he also writes the monthly "Star Trails" column in Sky and Telescope. Levy is the author of many books relating to astronomy, from beginners' observing guides to such recent popular accounts as Comets: Creators and Destroyers. He has written two other scientific biographies: The Man Who Sold the Milky Way: A Biography of Bart Bok and Clyde Tombaugh: Discoverer of Planet Pluto. Levy's awards include an Emmy for his role in writing the 1997 Discovery Channel documentary Three Minutes to Impact.

"A warm profile of an unpretentious, significant scientist. . . . Levy's account notes the . . . comet/asteroid hunting conducted by Shoemaker and his wife, Carolyn, and he accents that with personal anecdotes from his own friendship and work with the couple."—Booklist

"Fellow comet hunter Levy . . . pens an affectionate portrait of his gifted if mercurial friend. . . . Readers will appreciate, in addition to its welcome memoir of Shoemaker, the book's overview of the development of planetary geology during the last half-century."—Publishers Weekly

"Levy's book should appeal to a wide range of readers, including not only scientists but also those seeking the personalities behind astronomy in the late 20th century."—Jay M. Pasachoff, Astronomy

"David Levy's book has three main themes—biography, geology, and astronomy—neatly intertwined in a triple helix . . . Thanks to one of the most remarkable events in the entire history of astronomy, the names Shoemaker and Levy are now inextricably linked."—Arthur C. Clarke, Times Higher Education Supplement

"Levy writes well, and his pacey style keeps his personal story bubbling along superbly. The book is everything a 'good read' should be."—David W. Hughes, Nature

"This book is a wonderful read; it is very hard to put down once you start to flick through the pages, and it often brings a smile to your face. . . . The author covers so much of Shoemaker's life that the reader is taken through the most exciting periods in the history of planetary science, so not only do you get a biography of an inspirational man, but you get an inside view of the development of astrogeology from its creation to the present day. . . . Well written, fun, and a marvellous story of a man who made an impact on a subject that no other person is ever likely to be able to repeat."—Sarah Dunkin, The Observatory

"This is a book for anyone interested in modern planetary sciences, in the progression and expansion of classical geology into, literally, other worlds. . . . Gene's brilliance, energy, wit, and his science show through in every chapter."—Susan W. Kieffer, Physics Today

"A match made in the heavens. David Levy, the 'patron saint' of comet hunters, is uniquely qualified to write this definitive biography of Eugene Shoemaker, the renegade geologist who first figured out that Earth moves within a shooting gallery of asteroids and comets that intermittently plunge into Earth's surface and wreak global catastrophe upon this delicate assortment of molecules we call life."—Neil deGrasse Tyson, Director, Hayden Planetarium, Rose Center for Earth & Space

"Rarely can there have been a scientist held both in as much respect and in as much affection as Gene Shoemaker. And rarely can there have been a scientific story as inspirational as Gene's lonely and patient telescope search for comets and asteroids with his wife, Carolyn, and their friend David Levy. It was a fitting culmination to the Shoemaker legend when they discovered the spectacular train of comet fragments which crashed into Jupiter in 1994. No one is better suited to tell the story of Gene and Carolyn than David Levy, in this remarkable book."—Walter Alvarez, author of T. rex and the Crater of Doom (Princeton)

"Eugene Shoemaker was one of the leading planetary scientists since the field began half a century ago, and his life, which was fascinating indeed, should long be a topic of interest in the intellectual history of the twentieth century. As Shoemaker's collaborator in the discovery of the comet Shoemaker-Levy 9, David Levy is the preeminently qualified individual to write his biography. He has accomplished the task splendidly. This biography is comprehensive, balanced between personal vignettes and scientific work, well written, fun to read, and authoritative."—Clark R. Chapman, Institute Scientist, Southwest Research Institute

"One of this century's greatest scientists, Eugene Shoemaker practically invented the field of astrogeology, performing cutting edge research on terrestrial impact cratering right up to his untimely death. Only David Levy could have written such a lucid and personal biography of this man. Moreover, he provides excellent background material to help the general reader understand the evolution of the scientific theories to which Shoemaker contributed."—Paul W. Chodas, Research Scientist, Jet Propulsion Laboratory