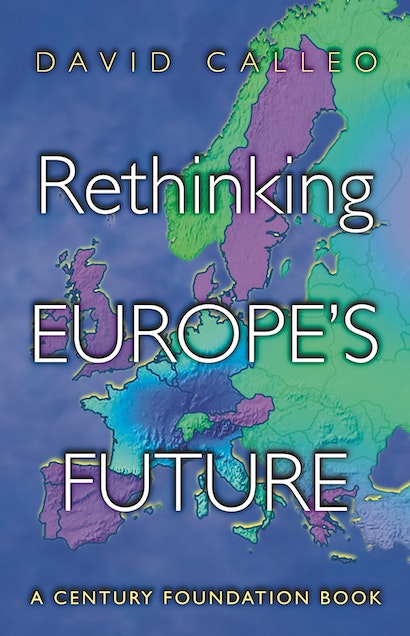 Rethinking Europe’s Future is a major reevaluation of Europe’s prospects as it enters the twenty-first century. David Calleo has written a book worthy of the complexity and grandeur of the challenges Europe now faces. Summoning the insights of history, political economy, and philosophy, he explains why Europe was for a long time the world’s greatest problem and how the Cold War’s bipolar partition brought stability of a sort. Without the Cold War, Europe risks revisiting its more traditional history. With so many contingent factors — in particular Russia and Europe’s Muslim neighbors — no one, Calleo believes, can pretend to predict the future with assurance. Calleo’s book ponders how to think about this future.


The book begins by considering the rival ”lessons” and trends that emerge from Europe’s deeper past. It goes on to discuss the theories for managing the traditional state system, the transition from autocratic states to communitarian nation states, the enduring strength of nation states, and their uneasy relationship with capitalism. Calleo next focuses on the Cold War’s dynamic legacies for Europe — an Atlantic Alliance, a European Union, and a global economy. These three systems now compete to define the future.


The book’s third and major section examines how Europe has tried to meet the present challenges of Russian weakness and German reunification. Succeeding chapters focus on Maastricht and the Euro, on the impact of globalization on Europeanization, and on the EU’s unfinished business — expanding into ”Pan Europe,” adapting a hybrid constitution, and creating a new security system. Calleo presents three models of a new Europe — each proposing a different relationship with the U.S. and Russia. A final chapter probes how a strong European Union might affect the world and the prospects for American hegemony. This is a beautifully written book that offers rich insight into a critical moment in our history, whose outcome will shape the world long after our time.

David P. Calleo is Dean Acheson Professor and Director of European Studies at the Paul Nitze School of Advanced International Studies at The Johns Hopkins University. He is the author of many books and articles, including The Bankrupting of America: How the Federal Deficit Is Impoverishing the Nation, Beyond American Hegemony: The Future of the Western Alliance, and The German Problem Reconsidered: Germany in the World System, 1870 to the Present.

"It is the great virtue of this book that by concentrating on the larger picture [Calleo] is able to convey the unprecedented scale of what is really happening in Europe.""—Economist

"This volume rests on theoretical insights to generate an innovative history of European political economy, one distinguished by elegant writing and invaluable annotated bibliographies. This scrupulously researched and wide-ranging book is a must-read for skimmers, scholars, and students of European matters."—Choice

"Undaunted by the challenge of speculating about future developments, Calleo does a masterful job of weaving the perspectives of history, economics, philosophy, and political science into a rich tapestry of forthright questions about Europe's future and persuasive speculation about answers and possibilities. . . . David Calleo's boos are always imperative reading for specialists, but his clear and vibrant writing is easily accessible to any educated reader interested in European and world affairs."—Forest L. Grieves, Perspectives on Political Science

"A truly distinguished book. Major. Important. Seminal. There is plenty in here for everyone to learn about the deeper meaning of what happened in recent European history and how it relates to what we ought to do. David Calleo's book is different in focus and scope from most books offering a 'big picture' sweep of history while still offering the 'sweep.'"—Brewster Denny, University of Washington

"Rethinking Europe's Future is a magisterial sweep through the history of the last century, drawing together a host of lines of inquiry on the dynamics of European integration. It represents a unique contribution to the literature on European politics and international relations. The author is one of the few people in the world qualified to present a comprehensive and synthetic treatment of the historical political economy of modern Europe, and the book reflects this."—Kathleen McNamara, author of The Currency of Ideas: Monetary Politics in the European Union