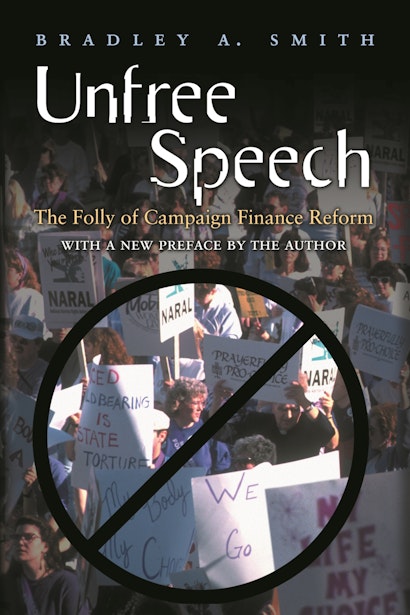 At a time when campaign finance reform is widely viewed as synonymous with cleaning up Washington and promoting political equality, Bradley Smith, a nationally recognized expert on campaign finance reform, argues that all restriction on campaign giving should be eliminated. In Unfree Speech, he presents a bold, convincing argument for the repeal of laws that regulate political spending and contributions, contending that they violate the right to free speech and ultimately diminish citizens’ power.


Smith demonstrates that these laws, which often force ordinary people making modest contributions of cash or labor to register with the Federal Election Commission or various state agencies, fail to accomplish their stated objectives. In fact, they have worked to entrench incumbents in office, deaden campaign discourse, burden grassroots political activity with needless regulation, and distance Americans from an increasingly professional, detached political class. Rather than attempting to plug “loopholes” in campaign finance law or instituting taxpayer-financed campaigns, Smith proposes a return to core First Amendment values of free speech and an unfettered right to engage in political activity.


Smith finds that campaign contributions have little corrupting effect on the legislature and shows that an unrestrained system of contributions and spending actually enhances equality. More money, not less, is needed in the political system, Smith concludes. Unfree Speech draws upon constitutional law and historical research to explain why campaign finance regulation is doomed and to illustrate the potentially drastic costs of efforts to make it succeed. Whatever one thinks about the impact of money on electoral politics, no one should take a final stand without reading Smith’s controversial and important arguments.

Bradley A. Smith is Professor of Law at Capital University Law School in Columbus, Ohio. As of May 2000, he has been serving a six-year term on the Federal Election Commission.

"Surely will be this year's most important book on governance."—George Will, Washington Post

"A sustained defense of free speech against those who would burden it with rules that run counter to the intentions of the founders . . . A stirring defense of First Amendment against the depredations of the reformers."—Ira Stoll, Wall Street Journal

"A much needed does of realism which has relevance far beyond America. He challenges the prevailing assumption that political problems may usually be remedied by ever larger doses of public subsidy and rules. . . . Even those who disagree with Bradley Smith's political stance will do well to remember his powerful arguments that the legislative cures for the ills of campaign and party financing are sometimes worse that the disease."—Michael Pinto-Duschinsky, Times Literary Supplement

"Enlightening and entertaining . . . To say the least, there are many who will disagree with Smith's findings and conclusions. But this is a marvelous contrarian view: moderate in tone, elegant in language, clever in argument."—Publishers Weekly

"A must-read for anyone wanting to make sense of the campaign-finance debate."—Kathryn Jean-Lopez, National Review

"Smith is ultimately a First Amendment absolutist, urging that any limitation on campaign contributions restricts free speech. Both opponents and supporters of McCain-Feingold should spend some time with this thoughtful study."—Booklist

"A timely read . . . One by one, [Smith] dismantles the girders on which campaign-finanace reform now stands."—The Washington Times

"Smith's presence on the FEC drives advocates of campaign finance reform to distraction and Unfree Speech makes quite clear why. . . . For Smith, it is vital to keep in mind what is at stake, which is freedom of speech itself. The constitutional issues cannot be swept aside."—Daniel J. Silver, The Weekly Standard

"Mr. Smith is a member of the Federal Election Commission, an agency created for the sole purpose of enforcing the Federal Election Campaign Act. Mr. Smith believes not only that the act doesn't work, but that it also undermines democracy. Moreover, he's convinced that virtually all attempts to regulate campaign finances are bad for society. . . . Mr. Smith's fundamental argument, though, is that there is no way to limit the expenditure of money on politics without violating the free speech rights of those who want to spend it."—Gerald F. Seib, The Wall Street Journal

"Unfree Speech is an important and valuable contribution to the money and politics literature. . . . [A] well-argued and well-presented counterreformist argument."—David C. W. Parker, Congress and the Presidency

"A wonderful, timely, and accessible book about one of the most pressing public questions of our time: the issue of campaign finance reform. Bedeviling our nation's political community for more than twenty-five years, the dispute over how best to regulate political campaign funding—and hence political campaign speech—has pitted free speech advocates against good government reformers, Democrats against Republicans, and courts against legislatures. Bradley Smith's highly readable book navigates all of these crosscurrents in a balanced way that informs the reader of the basic elements of the debates, while deftly skewering the key components of the conventional wisdom by arguing for the elimination of laws limiting campaign funding."—Joel Gora, Brooklyn Law School

"To date no one has written a sustained, book-length argument for the deregulation of campaign financing. Bradley Smith's Unfree Speech is a welcome step in filling that gap. He addresses numerous important themes, including the inroads on freedom of speech caused by campaign finance regulation, the tendency of reformers to exaggerate the harms of campaign finance and to seek increasing restrictions on speech, and the tendency for the burden of regulation to fall most heavily on everyday citizens."—Daniel Lowenstein, UCLA