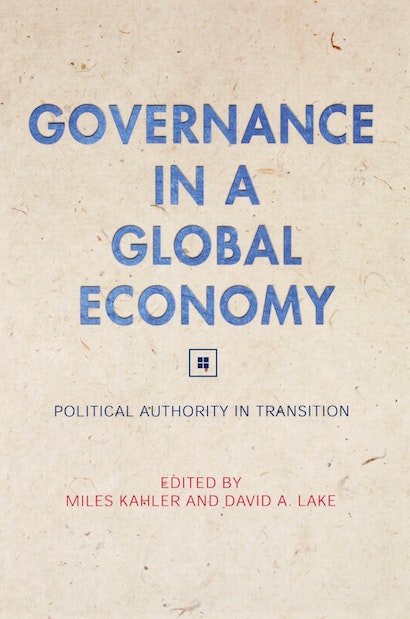 Critics of globalization claim that economic integration drains political authority from states: devolving authority to newly empowered regions, delegating it to supranational organizations, and transferring it to multinational firms and nongovernmental organizations. Globalization is also attacked for forcing convergence of state institutions and policies and threatening the ability of societies to chart their own democratically determined courses. In Governance in a Global Economy, Miles Kahler and David Lake assemble the contributions of seventeen leading scholars who have systematically investigated how global economic integration produces changes of governance. These authors conclude that globalization has created a new and intricate fabric of governance, but one that fails to match the stark portrait of beleaguered states.


Exploring changes in governance across several policy areas (such as tourism, trade, finance, and fiscal and monetary policy), the authors demonstrate that globalization changes the policy preferences of some actors, increases the bargaining power of others, and opens new institutional options for yet others. By reintroducing agency and choice into our understanding of globalization, this book provides important new insights into the complex and contingent effects of globalization on political authority and governance.

"This book provides important insights into globalization's complex and contradictory effects on political authority and governance in general and on new institutional options in particular."—Donald E. Klingner, Public Administration Review

"This well-crafted and timely volume challenges the common assumption that globalization is an inexorable force severely circumscribing the policy autonomy or sovereignty of national governments. Its chapters make for a rich collection of ideas, evidence, and rigorous social science theorizing about the causes and consequences of global change. Following the terrible events of September 11, 2001, some observers speculated that 'globalization is dead.' But this has proven not to be so. Indeed, the issues addressed in this book are more important than ever for those concerned with pursuing an understanding of contemporary international affairs."—Timothy J. Sinclair, University of Warwick, coauthor of Approaches to World Order

"This book includes a number of excellent chapters by many of the leading scholars in international political economy that advance important and innovative arguments for globalization's impact on governance as being indeterminate. The editors are to be commended on bringing together such a high quality group of researchers in one volume."—Eric Helleiner, Trent University, author of States and the Re-emergence of Global Finance