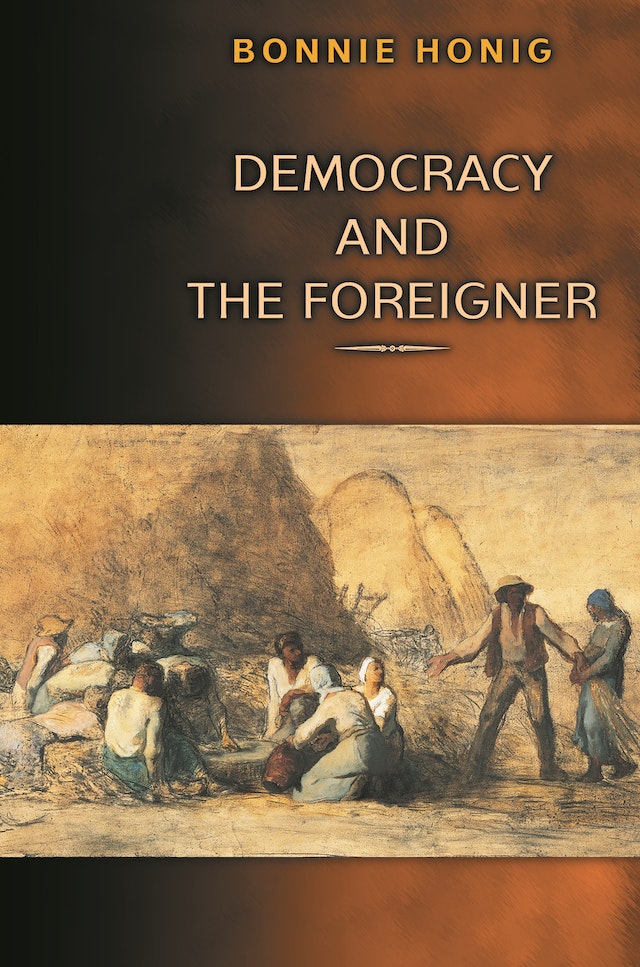 What should we do about foreigners? Should we try to make them more like us or keep them at bay to protect our democracy, our culture, our well-being? This dilemma underlies age-old debates about immigration, citizenship, and national identity that are strikingly relevant today. In Democracy and the Foreigner, Bonnie Honig reverses the question: What problems might foreigners solve for us? Hers is not a conventional approach. Instead of lauding the achievements of individual foreigners, she probes a much larger issue — the symbolic politics of foreignness. In doing so she shows not only how our debates over foreignness help shore up our national or democratic identities, but how anxieties endemic to liberal democracy themselves animate ambivalence toward foreignness.

Central to Honig’s arguments are stories featuring ”foreign-founders,” in which the origins or revitalization of a people depend upon a foreigner’s energy, virtue, insight, or law. From such popular movies as The Wizard of Oz, Shane, and Strictly Ballroom to the biblical stories of Moses and Ruth to the myth of an immigrant America, from Rousseau to Freud, foreignness is represented not just as a threat but as a supplement for communities periodically requiring renewal. Why? Why do people tell stories in which their societies are dependent on strangers?

One of Honig’s most surprising conclusions is that an appreciation of the role of foreigners in (re)founding peoples works neither solely as a cosmopolitan nor a nationalist resource. For example, in America, nationalists see one archetypal foreign-founder — the naturalized immigrant — as reconfirming the allure of deeply held American values, whereas to cosmopolitans this immigrant represents the deeply transnational character of American democracy. Scholars and students of political theory, and all those concerned with the dilemmas democracy faces in accommodating difference, will find this book rich with valuable and stimulating insights.

Bonnie Honig is Professor of Political Science at Northwestern University and Senior Research Fellow at the American Bar Foundation. She is author of Political Theory and the Displacement of Politics and editor of Feminist Interpretations of Hannah Arendt.

"Bonnie Honig is a political thinker who doesn't define problems away but rather zeroes in on what problems reveal. Instead of asking 'What are we to do about foreigners?' she asks 'What unacknowledged work is the idea of the foreigner doing for us? And who is this us?' In investigating why founders (or re-founders) are so often foreigners, she has written a wonderfully timely and thought-provoking book."—Barbara E. Johnson, Harvard University, author of The Feminist Difference

"In this brilliant and original work, Bonnie Honig shows how—from the Biblical Book of Ruth and its recent commentators through Freud, Rousseau, and contemporary U.S. political thinkers to Shane and The Wizard of Oz—the alien is recuperated for a national project that he or she also unsettles. A major contribution to democratic theory, and always engaged with concrete particulars, Democracy and the Foreigner is alive with insight on every page."—Michael Rogin, University of California, Berkeley

"Honig perceptively identifies a topic—the diverse political uses of concepts and depictions of 'foreignness'—that is both topical and of enduring importance, yet rarely explored so explicitly and evocatively. Her work is stimulating and valuable even for those of us, perhaps most of all for those of us, with whom she disagrees."—Rogers M. Smith, Alfred Cowles Professor of Government, Yale University

"Extremely interesting, well written, and imaginative. Surely there are few books that integrate into their argument Bernard Williams, the Book of Ruth, and the future of the nation-state in an increasingly fluid world. Honig raises vital questions about the tension between state-oriented 'localism' and more transnational 'cosmopolitanism.'"—Sanford Levinson, University of Texas, Austin