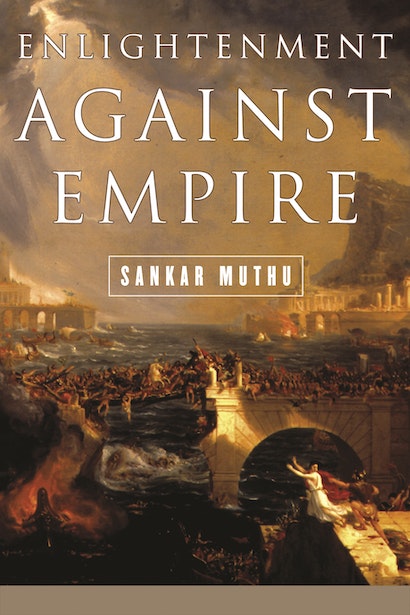 In the late eighteenth century, an array of European political thinkers attacked the very foundations of imperialism, arguing passionately that empire-building was not only unworkable, costly, and dangerous, but manifestly unjust. Enlightenment against Empire is the first book devoted to the anti-imperialist political philosophies of an age often regarded as affirming imperial ambitions. Sankar Muthu argues that thinkers such as Denis Diderot, Immanuel Kant, and Johann Gottfried Herder developed an understanding of humans as inherently cultural agents and therefore necessarily diverse. These thinkers rejected the conception of a culture-free “natural man.” They held that moral judgments of superiority or inferiority could be made neither about entire peoples nor about many distinctive cultural institutions and practices.


Muthu shows how such arguments enabled the era’s anti-imperialists to defend the freedom of non-European peoples to order their own societies. In contrast to those who praise “the Enlightenment” as the triumph of a universal morality and critics who view it as an imperializing ideology that denigrated cultural pluralism, Muthu argues instead that eighteenth-century political thought included multiple Enlightenments. He reveals a distinctive and underappreciated strand of Enlightenment thinking that interweaves commitments to universal moral principles and incommensurable ways of life, and that links the concept of a shared human nature with the idea that humans are fundamentally diverse. Such an intellectual temperament, Muthu contends, can broaden our own perspectives about international justice and the relationship between human unity and diversity.

Sankar Muthu is Assistant Professor of Politics at Princeton University.

"A well-argued first book that is as original as it is convincing."—Foreign Affairs

"Every now and then a book comes along to remind us once again that history and culture are not absolute terms. They are dynamic and relative to their past and present. Sankar Muthu has written such a book. His analysis clearly demonstrates that the historical process we have come to know as the 'Enlightenment' was really many enlightenments. . . . This book is highly recommended for students of history, philosophy, and culture."—Colonial Latin American Historical Review

"[A] rich and elegantly written book. . . . Muthu's provocative thesis is that moral universalism did not suffice to ground opposition to empire. . . . Enlightenment Against Empire moves beyond accounts of political positions into thoughtful reconstructions and syntheses of arguments, and among its many virtues is to remind us that work in the history of political thought need not be done in an antiphilosophical fashion."—Jacob T. Levy, Perspectives on Politics

"Inspired by a more multifaceted view of the Enlightenment, Muthu looks at a forgotten legacy from this period, its anti-imperialism."—Gregory Jusdanis, Research in African Literatures

"Enlightenment against Empire, dealing with European attitudes to the non-European world, is a valuable contributio. n. . . [T]his is an admirable study, handling an important subject with insight and care."—John Hope Mason, History of Political Thought

"Neither pure universalism nor radical relativism can provide the foundation for a valid critique of imperial ideology. A successful attempt at coordinating the two approaches was made at the time of the Enlightenment. In today's world, where imperialism has again become a motivating force in international politics, Sankar Muthu does well to revive and analyze this critical conception."—Tzvetan Todorov, author of Hope and Memory

"This is a remarkable book to come from a young scholar. Sankar Muthu has recovered a lost history of Enlightenment anti-imperialism, and shown us how its great exponents—Diderot, Kant and Herder—were able to combine a keen sense of cultural diversity with a steady awareness of what may be morally universal. The book is not only a virtuoso piece of historical reconstruction, but also a lesson in how a proper understanding of history equips us in unexpected and powerful ways to make sense of our own time."—Richard Tuck, Harvard University

"An impressive work of scholarship with a fascinating line of argument, Enlightenment against Empire is an important contribution to contemporary debate and a necessary corrective to one of its main tendencies. In very readable prose, Muthu demonstrates that the characterization of Enlightenment humanism as Eurocentric and exclusionary does not fit the three very important thinkers examined, and indeed that Enlightenment humanism provides valuable resources for rethinking moral, social, and political theory today."—Thomas A. McCarthy, Northwestern University

"Through close readings of Diderot, Kant, and Herder, Muthu analyzes an anti-imperialist strand in eighteenth century political thought. He sees these thinkers as providing a novel view of what it means to be human: 'humanity as cultural agency,' that is, membership in diverse social units with distinctive practices and beliefs. From Muthu's emphasis upon the thick notion of culture shared by these authors, he derives general arguments for human worth and respect, and rejects facile indictments of 'The Enlightenment' or 'The Enlightenment Project.'"—Melvin Richter, Hunter College