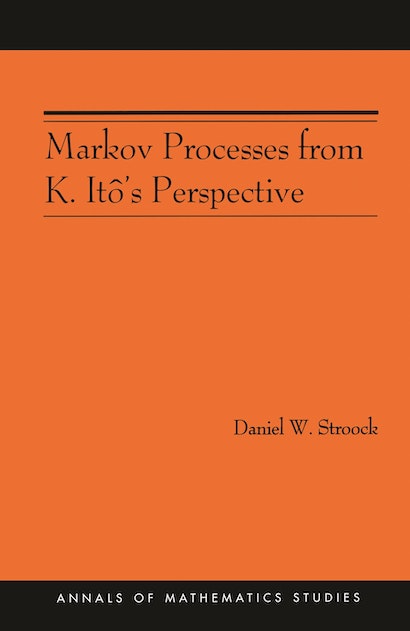 Kiyosi Itô’s greatest contribution to probability theory may be his introduction of stochastic differential equations to explain the Kolmogorov-Feller theory of Markov processes. Starting with the geometric ideas that guided him, this book gives an account of Itô’s program.


The modern theory of Markov processes was initiated by A. N. Kolmogorov. However, Kolmogorov’s approach was too analytic to reveal the probabilistic foundations on which it rests. In particular, it hides the central role played by the simplest Markov processes: those with independent, identically distributed increments. To remedy this defect, Itô interpreted Kolmogorov’s famous forward equation as an equation that describes the integral curve of a vector field on the space of probability measures. Thus, in order to show how Itô’s thinking leads to his theory of stochastic integral equations, Stroock begins with an account of integral curves on the space of probability measures and then arrives at stochastic integral equations when he moves to a pathspace setting. In the first half of the book, everything is done in the context of general independent increment processes and without explicit use of Itô’s stochastic integral calculus. In the second half, the author provides a systematic development of Itô’s theory of stochastic integration: first for Brownian motion and then for continuous martingales. The final chapter presents Stratonovich’s variation on Itô’s theme and ends with an application to the characterization of the paths on which a diffusion is supported.


The book should be accessible to readers who have mastered the essentials of modern probability theory and should provide such readers with a reasonably thorough introduction to continuous-time, stochastic processes.

Daniel W. Stroock is a Simons Professor of Mathematics at the Massachusetts Institute of Technology and the author of several books, including A Concise Introduction to the Theory of Integration and Probability Theory, an Analytic View.