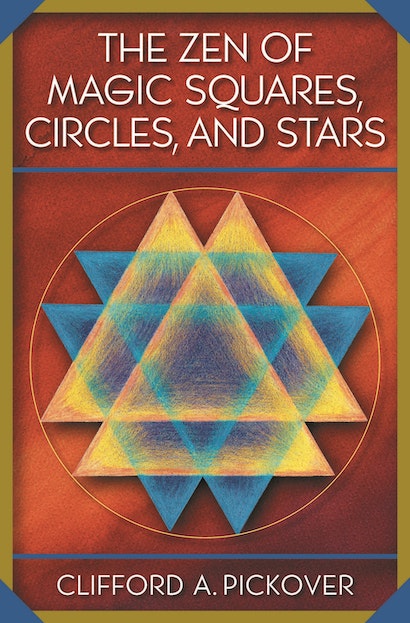 Humanity’s love affair with mathematics and mysticism reached a critical juncture, legend has it, on the back of a turtle in ancient China. As Clifford Pickover briefly recounts in this enthralling book, the most comprehensive in decades on magic squares, Emperor Yu was supposedly strolling along the Yellow River one day around 2200 B.C. when he spotted the creature: its shell had a series of dots within squares. To Yu’s amazement, each row of squares contained fifteen dots, as did the columns and diagonals. When he added any two cells opposite along a line through the center square, like 2 and 8, he always arrived at 10. The turtle, unwitting inspirer of the ”Yu” square, went on to a life of courtly comfort and fame.


Pickover explains why Chinese emperors, Babylonian astrologer-priests, prehistoric cave people in France, and ancient Mayans of the Yucatan were convinced that magic squares — arrays filled with numbers or letters in certain arrangements — held the secret of the universe. Since the dawn of civilization, he writes, humans have invoked such patterns to ward off evil and bring good fortune. Yet who would have guessed that in the twenty-first century, mathematicians would be studying magic squares so immense and in so many dimensions that the objects defy ordinary human contemplation and visualization?


Readers are treated to a colorful history of magic squares and similar structures, their construction, and classification along with a remarkable variety of newly discovered objects ranging from ornate inlaid magic cubes to hypercubes. Illustrated examples occur throughout, with some patterns from the author’s own experiments. The tesseracts, circles, spheres, and stars that he presents perfectly convey the age-old devotion of the math-minded to this Zenlike quest. Number lovers, puzzle aficionados, and math enthusiasts will treasure this rich and lively encyclopedia of one of the few areas of mathematics where the contributions of even nonspecialists count.

Clifford Pickover is the author of over twenty books on a broad range of topics in science and art, a columnist for Odyssey, and an inventor. His books include Surfing Through Hyperspace: Understanding Higher Universes in Six Easy Lessons, Wonders of Numbers: Adventures in Mathematics, Mind, and Meaning, and The Loom of God: Mathematical Tapestries at the Edge of Time.

"A perpetual idea machine, Clifford Pickover is one of the most creative, original thinkers in the world today."—Journal of Recreational Mathematics

"Pickover just seems to exist in more dimensions than the rest of us."—Ian Stewart, Scientific American

"Clifford Pickover is many things—scientist, scholar, author, editor, and visionary."—Games

"It is a safe bet to conjecture that this is the best recreational mathematics book that will be published in this year. . . . Pickover writes with his usual style and straightforward simplicity in this book. The material is presented well and can be understood by anyone with a basic middle school mathematics background. This is a cool book!"—Charles Ashbacker, Journal of Recreational Mathematics

"Pickover writes about his subject with contagious enthusiasm and comprehensive erudition."—Choice

"A refreshing new look at a timeless topic, brimming over with ideas, littered with surprising twists. Anyone who loves numbers, anyone who enjoys puzzles, will find The Zen of Magic Squares, Circles, and Stars compulsive (and compulsory!) reading."—Ian Stewart, University of Warwick, author of Flatterland and Does God Play Dice?

"Pickcover carries the mystique of magic squares and their relatives into the twenty-first century with his new book, The Zen of Magic Squares, Circles, and Stars. Whether you're seeking an introduction to magic squares, an in-depth study, some historical information, or just some enjoyable magic figure problems, tricks, properties, or novelties-this book is for you. Pickover does not leave a magic square unturned, and tantalizes us just enough to want to explore further. From the very famous to the less known, Pickover brings them all together in this amazing collection as he points out their roles in science, our lives and the universe."—Theoni Pappas author of The Joy of Mathematics and Math-A-Day

"At first glance magic squares may seem frivolous (Ben Franklin's opinion, even as he spent countless hours studying them!), but I think that is wrong. The great nineteenth-century German mathematician Leopold Kronecker said 'God Himself made the whole numbers—everything else is the work of men,' and Cliff Pickover's stimulating book hints strongly at the possibility that God may have done more with the integers than just create them. I don't believe in magic in the physical world, but magic squares come as close as we will probably ever see to being mathematical magic."—Paul J. Nahin, University of New Hampshire, author of Duelling Idiots and Other Probability Puzzlers

"Clifford Pickover has compiled such a wonderfully voluminous collection of magic squares and related configurations that the physical book itself threatens to take the shape of a magic cube. Whether or not you achieve arithmetical satori contemplating these engagingly intricate patterns, you will surely come to appreciate their history, beauty, and richness."—John Allen Paulos, Temple University, author of Innumeracy and A Mathematician Reads the Newspaper

"Who would have thought that the simple numbers we used when learning to count as children could be arranged into so many geometric patterns with interesting properties? If playing with numbers is your thing, this latest work by Cliff Pickover will provide you will countless hours of mystical entertainment and mental challenges."—Julien Clinton Sprott, University of Wisconsin-Madison

"Every generation seems to demand its own updated book dedicated to magic squares. Pickover's work meets the needs of the present generation. It is an enthusiastic, whimsical, and idiosyncratic compendium of magic squares and their variants, some of which are centuries old, some as fresh as corn picked this morning."—Sherman Stein, University of California, Davis

"Well documented and illustrated, this book is essentially a huge catalogue of these arithmetical beasts called magic squares. No book that I know of presents such a large range of 'mysterious, odd, and fun' patterns, as the author puts it. This includes the numerous geometrical diagrams that reveal some hidden symmetries not obvious to the eye contemplating the number arrays. Throughout, Pickover convincingly substantiates his claim that the field of magic square study is still wide open."—Arturo Sangalli, author of The Importance of Being Fuzzy