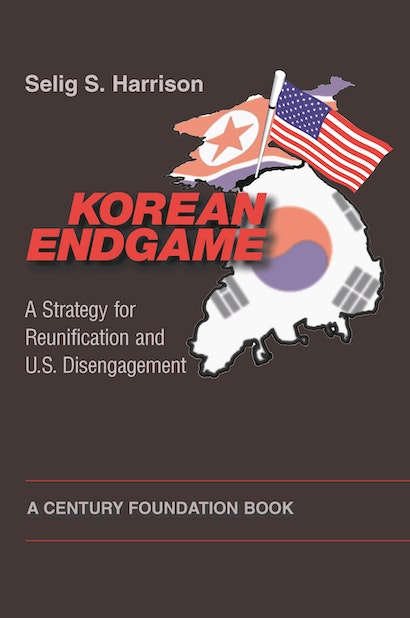 Nearly half a century after the fighting stopped, the 1953 Armistice has yet to be replaced with a peace treaty formally ending the Korean War. While Russia and China withdrew the last of their forces in 1958, the United States maintains 37,000 troops in South Korea and is pledged to defend it with nuclear weapons. In Korean Endgame, Selig Harrison mounts the first authoritative challenge to this long-standing U.S. policy.


Harrison shows why North Korea is not — as many policymakers expect — about to collapse. And he explains why existing U.S. policies hamper North-South reconciliation and reunification. Assessing North Korean capabilities and the motivations that have led to its forward deployments, he spells out the arms control concessions by North Korea, South Korea, and the United States necessary to ease the dangers of confrontation, centering on reciprocal U.S. force redeployments and U.S. withdrawals in return for North Korean pullbacks from the thirty-eighth parallel.


Similarly, he proposes specific trade-offs to forestall the North’s development of nuclear weapons and missile delivery systems, calling for the withdrawal of the U.S. nuclear umbrella in conjunction with agreements to denuclearize Korea embracing China, Russia, and Japan. The long-term goal of U.S. policy, he argues, should be the full disengagement of U.S. combat forces from Korea as part of regional agreements insulating the peninsula from all foreign conventional and nuclear forces.


A veteran journalist with decades of extensive firsthand knowledge of North Korea and long-standing contacts with leaders in Washington, Seoul, and Pyongyang, Harrison is perfectly placed to make these arguments. Throughout, he supports his analysis with revealing accounts of conversations with North Korean, South Korean, and U.S. leaders over thirty-five years. Combining probing scholarship with a seasoned reporter’s on-the-ground experience and insights, he has given us the definitive book on U.S. policy in Korea — past, present, and future.

Selig S. Harrison is a former Washington Post Bureau Chief in Northeast Asia and the author of five books about the continent. He served as Senior Fellow and Director of Asian Studies at the Brookings Institution and, for twenty-two years, as a Senior Associate of the Carnegie Endowment for International Peace. He has visited North Korea seven times and met the late President Kim Il Sung twice. He played a key role in setting the stage for the 1994 U.S. nuclear freeze agreement with Pyongyang.

"At a time when North Korean nuclear developments have created a crisis in world affairs, we are fortunate to have this thoughtful and provocative book. . . . [Harrison] covers a wide range of issues and much inside history, making this read . . . valuable."—Foreign Affairs

"At a time when North Korean nuclear developments have created a crisis in world affairs, we are fortunate to have this thoughtful and provocative book."—Lucian W. Pye, Foreign Affairs

"Selig Harrison has longer and more intimate experience with North Korean security issues than any other American observer. He has used his inside knowledge plus extensive additional research to produce a provocative appeal for new thinking about the current situation on the Korean peninsula and the challenges in the years ahead. This is an important contribution that will benefit policymakers and the public alike."—Don Oberdorfer, author of The Two Koreas: A Contemporary History, former diplomatic correspondent for the Washington Post

"Korean Endgame is the best analysis I have seen of the difficult policy choices facing the United States in Korea. Selig Harrison covers all the key issues accurately and thoroughly, bringing into perspective the complicated relationships among North Korea, South Korea, and the United States. Providing a realistic strategy for ending one of the world's most dangerous military confrontations, this book should be required reading for policymakers and others who care about Asia and international affairs."—Jimmy Carter, 39th President of the United States, Founder and Chairman of The Carter Center

"As one of the few Americans who have known both South and North Korea for the past three decades, Mr. Harrison has made a unique and valuable contribution to the promotion of improved relations between the two Koreas and between North Korea and the United States. With his new book, he has, once again, provided policymakers on both sides of the Pacific with concrete and effective ways to promote peace and stability in the Northeast Asian region."—Maj. Gen. Lim Dong-won (Ret.), Special Advisor to the President for National Security and Unification and former Director of the National Intelligence Service, Republic of Korea

"Selig Harrison has written the best book to appear on the Korean problem in many years. It is the summing up of thirty-five years of close observation by one of America's best analysts, who marries the curiosity of a great investigative reporter to the contemporary policy concerns of someone in close touch with debates in Washington. Unlike almost anyone else, Harrison has had access to all the major players in Washington, Seoul, and Pyongyang, while retaining his independence and authoritative judgment."—Bruce Cumings, author of The Origins of the Korean War

"Harrison's fair-minded and well-researched book makes a timely contribution to American understanding of relations with North Korea. His reportage on North Korean points of view are gleaned from his years of first-hand contact. He uncovers much that has never appeared in print and clears up numerous misunderstandings. Accessible to anyone curious about foreign affairs, the book is a must-read for anyone interested in Korea or the region."—Leon Sigal, author of Disarming Strangers: Nuclear Diplomacy with North Korea