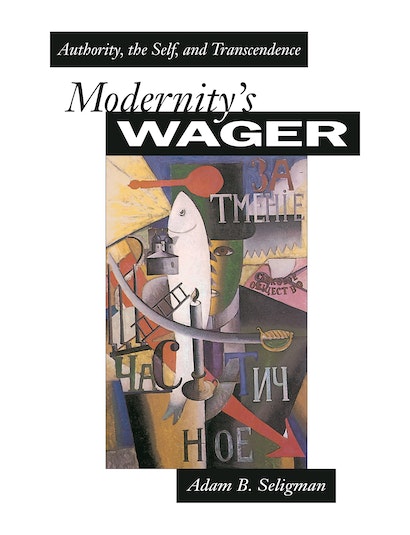 Adam Seligman, one of our most important social thinkers, continues the incisive critique of modernity he began in his previously acclaimed The Idea of Civil Society and The Problem of Trust. In this provocative new work of social philosophy, Seligman evaluates modernity’s wager, namely, the gambit to liberate the modern individual from external social and religious norms by supplanting them with the rational self as its own moral authority. Yet far from ensuring the freedom of the individual, Seligman argues, “the fundamentalist doctrine of enlightened reason has called into being its own nemesis” in the forms of ethnic, racial, and identity politics. Seligman counters that the modern human must recover a notion of authority that is essentially transcendent, but which extends tolerance to those of other — or no — faiths.


Through its denial of an authority rooted in an experience of transcendence, modernity fails to account for individual and collective moral action. First, deprived of a sacred source of the self, depictions of moral action are reduced to motives of self interest. Second, dismissing the sacred leaves the resurgence of religious movements unexplained.


In this rigorous and imaginative study, Seligman seeks to discover a durable source of moral authority in a liberalized world. His study of shame, pride, collective guilt, and collective responsibility demonstrates the mutual relationship between individual responsibility and communal authority. Furthermore, Seligman restores the indispensable role of religious traditions — as well as the features of those traditions that enhance, rather than denigrate, tolerance. Sociologists, political theorists, moral philosophers, and intellectual historians will find Seligman’s thesis enlightening, as will anyone concerned with the ethical and religious foundations of a tolerant society.

Adam B. Seligman is Professor of Religion at Boston University. He is the author of several books, including The Idea of Civil Society and The Problem of Trust (both Princeton).

"This book is an erudite critique of existing traditions of Western thought, especially in sociology. . . . [It] offers an excellent critique of the hole that social science has gotten into in trying to understand a rational yet authoritative social order."—Choice

"A very valuable contribution to the sociological study of religion, with strong relevance to philosophy and theology as well. Any work that can connect such diverse domains deserves to be applauded."—Steven D. Boyer, Journal of the American Academy of Religion

"This very timely book is about authority and its connection to the constitution of selfhood and to related notions of community and the sacred. Adam Seligman proposes a very bold thesis. . . . He develops it with substantive and nuanced arguments."—Thomas A. Byrnes, Journal of Religion

"In Modernity's Wager, Seligman broaches the relationship of selfhood to authority directly. The result is a deeply thoughtful book, which makes a powerful and distinctive contribution to contemporary social philosophy. Seligman's book is well written and well organized, displaying a formidable erudition in the history of philosophy and social thought. It is worth reading simply for the perceptive and arresting overview which it contains of thought on authority and morality over the past several centuries in relation to far older Jewish, Christian and classical traditions."—John Gray, London School of Economics

"Writing on the borderlands of sociology and theology, Seligman has provided an engaging and original account of the problem of modernity. He has identified several factors and forces that are irreducible in the contemporary search for meaning and order."—Jonathan B. Imber, Wellesley College, Editor-in-Chief of Society.