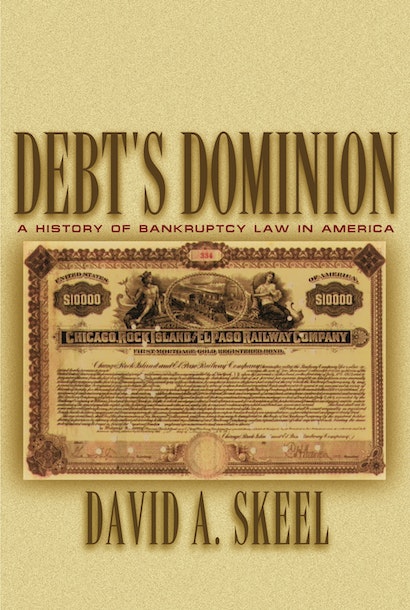 Bankruptcy in America, in stark contrast to its status in most other countries, typically signifies not a debtor’s last gasp but an opportunity to catch one’s breath and recoup. Why has the nation’s legal system evolved to allow both corporate and individual debtors greater control over their fate than imaginable elsewhere? Masterfully probing the political dynamics behind this question, David Skeel here provides the first complete account of the remarkable journey American bankruptcy law has taken from its beginnings in 1800, when Congress lifted the country’s first bankruptcy code right out of English law, to the present day.


Skeel shows that the confluence of three forces that emerged over many years — an organized creditor lobby, pro-debtor ideological currents, and an increasingly powerful bankruptcy bar — explains the distinctive contours of American bankruptcy law. Their interplay, he argues in clear, inviting prose, has seen efforts to legislate bankruptcy become a compelling battle royale between bankers and lawyers — one in which the bankers recently seem to have gained the upper hand. Skeel demonstrates, for example, that a fiercely divided bankruptcy commission and the 1994 Republican takeover of Congress have yielded the recent, ideologically charged battles over consumer bankruptcy.


The uniqueness of American bankruptcy has often been noted, but it has never been explained. As different as twenty-first century America is from the horse-and-buggy era origins of our bankruptcy laws, Skeel shows that the same political factors continue to shape our unique response to financial distress.

David A. Skeel, Jr. is a professor of law at the University of Pennsylvania and has written widely on corporate and bankruptcy issues.

"For anyone with a keen interest in following the unfolding of the Enron case (as well as the liquidations of scores of other corporations, large and small, that have gone bust in the past two or so years), perusing Debt's Dominion would be educational. . . . An informative, useful history."—Shawn Zeller, National Journal

"David A. Skeel's surprisingly readable rummage through the philosophical, political and policy considerations that continue to swirl around bankruptcy . . . is an expertly guided tour. . . . First it offers a rare and insightful examination of how policy and politics interact in bankruptcy legislation; second, it provides an extraordinary look at the rise, fall, rise, fall . . . of the bankruptcy bar, and the immense role it came to play in policy."—John Caher, New York Law Journal

"David Skeel has written a new definitive source on the history of bankruptcy law in the United States. His work is a detailed and complete history of federal bankruptcy legislation and of the political debates and maneuvering that shaped those laws."—Lynne Pierson Doti, Enterprise & Society

"Anyone seeking to understand both the evolving shape of bankruptcy law in America and its impacts on American legal, social, and economic trends would find Skeel's book a very useful starting place. Accessibly written and yet full of highly technical information, Debt's Dominion is one of the best books on bankruptcy currently available."—Charles L. Zelden, Journal of American History

"David Skeel's work provides us with a valuable one-volume overview of the progression of American consumer and corporate bankruptcy law over the last century."—Thomas G. W. Telfer, Law and Politics Book Review

"An extremely useful book. Its strength lies in its narrative of the past century and its description of the interplay of interest group politics."—Howard Rosenthal, Princeton University

"David Skeel has written an important book. Debt's Dominion: A History of Bankruptcy Law in America is an interesting and engaging account of bankruptcy law, and a worthy successor to Charles Warren's 1935 classic Bankruptcy in United States History. Skeel's story is startlingly different from traditional accounts and shows how the forces that bring about legislative change are more subtle than commonly understood."—Douglas G. Baird, University of Chicago