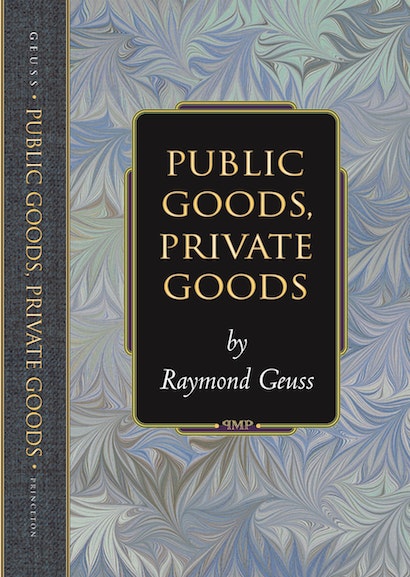 Much political thinking today, particularly that influenced by liberalism, assumes a clear distinction between the public and the private, and holds that the correct understanding of this should weigh heavily in our attitude to human goods. It is, for instance, widely held that the state may address human action in the ”public” realm but not in the ”private.” In Public Goods, Private Goods Raymond Geuss exposes the profound flaws of such thinking and calls for a more nuanced approach. Drawing on a series of colorful examples from the ancient world, he illustrates some of the many ways in which actions can in fact be understood as public or private.


The first chapter discusses Diogenes the Cynic, who flouted conventions about what should be public and what should be private by, among other things, masturbating in the Athenian marketplace. Next comes an analysis of Julius Caesar’s decision to defy the Senate by crossing the Rubicon with his army; in doing so, Caesar asserted his dignity as a private person while acting in a public capacity. The third chapter considers St. Augustine’s retreat from public life to contemplate his own, private spiritual condition. In the fourth, Geuss goes on to examine recent liberal views, questioning, in particular, common assumptions about the importance of public dialogue and the purportedly unlimited possibilities humans have for reaching consensus. He suggests that the liberal concern to maintain and protect, even at a very high cost, an inviolable ”private sphere” for each individual is confused.


Geuss concludes that a view of politics and morality derived from Hobbes and Nietzsche is a more realistic and enlightening way than modern liberalism to think about human goods. Ultimately, he cautions, a simplistic understanding of privacy leads to simplistic ideas about what the state is and is not justified in doing.

Raymond Geuss is Reader in Philosophy at the University of Cambridge. He is the author of The Idea of a Critical Theory and History and Illusion in Politics.

"A brief and scintillating exploration. . . . Lively and provocative, it contains . . . an impressive assortment of ideas, arguments, and themes. . . . Too few philosophical works are a great pleasure to read. This is one of them."—Richard Kraut, Notre Dame Philosophical Reviews

"Both edifying and disquieting. . . . Geuss's expositional skills make his tour through the classical world as enlightening as the conceptual distinctions which are its official destination."—Leif Wenar, Ethics

"This book makes it possible to hope once again that philosophy could become political . . . by using its own resources of genealogical investigation, analytic criticism, and conceptual reflection."—Christoph Menke, Die Zeit

"The fund of information Geuss brings into his discussion of the ancients, and the verve and charm with which it is all presented, make the central chapters of this book particularly engaging. The section on Diogenes the Cynic is very interesting, the presentation is lively and vigorous, and what Geuss has to say will be news for an English-speaking audience. Much the same is true with the section on Caesar. And the account of Augustine's search for himself is, again, striking and full of interest."—John M. Cooper, Princeton University