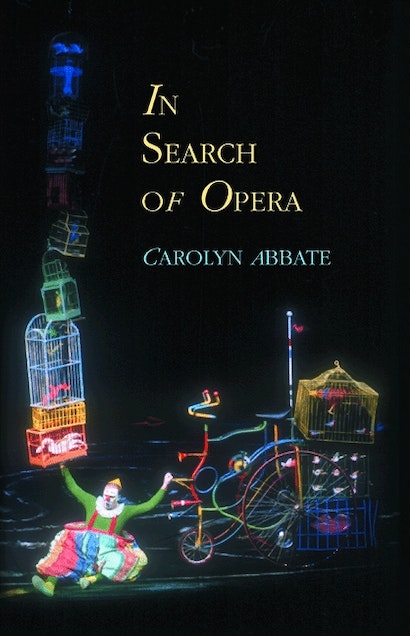 In her new book, Carolyn Abbate considers the nature of operatic performance and the acoustic images of performance present in operas from Monteverdi to Ravel. Paying tribute to music’s realization by musicians and singers, she argues that operatic works are indelibly bound to the contingency of live singing, playing, and staging. She seeks a middle ground between operas as abstractions and performance as the phenomenon that brings opera into being.


Weaving between opera’s “facts of life” and a series of works including The Magic Flute, Parsifal, and Pelléas, Abbate explores a spectrum of attitudes towards musical performance, which range from euphoric visions of singers as creators to uncanny images of musicians as lifeless objects that have been resuscitated by scripts. In doing so, she touches upon several critical issues: the Wagner problem; coloratura, virtuosity, and their critics; the implications of disembodied voice in opera and film; mechanical music; the mortality of musical sound; and opera’s predilection for scenes positing mysterious unheard music. An intersection between transcendence and intense physical grounding, she asserts, is a quintessential element of the genre, one source of the rapture that operas and their singers can engender in listeners.

In Search of Opera mediates between an experience of opera that can be passionate and intuitive, and an intellectual engagement with opera as a complicated aesthetic phenomenon. Marrying philosophical speculation to historical detail, Abbate contemplates a central dilemma: the ineffability of music and the diverse means by which a fugitive art is best expressed in words. All serious devotees of opera will want to read this imaginative book by s music-critical virtuoso.

Carolyn Abbate is Professor of Music at Princeton University. She is the author of Unsung Voices: Opera and Musical Narrative in the Nineteenth Century (Princeton), which will appear in French as Voix hors-chant. She is translator of Jean-Jacques Nattiez's Music and Discourse: Toward a Semiology of Music (Princeton) and of the forthcoming Music and the Ineffable by Vladimir Jankélévitch (Princeton).

"Anyone who believes in opera as an essential human experience will warm to this book, a must-have if you believe that this bizarre art form has something more to sing about than the trillings of bejewelled prima donnas and the positively necrophiliac yearning for the presence of long dead musician."—Keith Warner, BBC Music Magazine

"Ten years after her much-praised Unsung Voices, Carolyn Abbate has produced another important literary investigation into opera. What sets it apart from the burgeoning canon on the same subject is the sensitivity of its writer to opera's contrasts and contradictions. Her abstract imagination and focused, economic style are able to express what she calls the connection between opera's 'metaphysical flight and the fall to earth'. . . . Through the pieces themselves, we get a picture of intersecting relationships—between composer and performer, sound and body, story and symbol. . . .Many of the most problematic aspects of opera are explored through the pieces themselves, and her transparency of style allows the reader to continue thinking long after the discussion is over. As with all the best books, I am left applying Abbate's process and themes to many other pieces and in many other contexts long after I have finished reading."—Julia Hollander, Opera Now

"[A] penetrating probe into the body of opera, and a new response to that abiding awareness . . . that the 'science' of musicology itself is a 'machine' which ought to make mere human beings as uneasy about its uncanny propensity to disrupt and disturb as operatic characters can be in face of the unknown or the inhuman. . . . In Search of Opera is a text whose tissue of messages is well worth the closest attention."—Arnold Whittall, Musical Times

"In Search of Opera is one of the most important and exciting considerations of the ontology of the operatic work to date. Its main accomplishment is extraordinary, opening up an entirely new approach to thinking about how musical works resonate, one that can be applied not just to the operatic medium, but to the western art music tradition as a whole. This book will be of interest, therefore, not only to students of opera, but to anyone who has ever thought about what it is to listen, to compose, to perform."—Hilary Poriss, Notes

"In Search of Opera is powerful, original, and important. Carolyn Abbate is a highly distinctive voice in the field of opera studies. Her capacity to disturb easy orthodoxies is astonishing. She brings philosophical sophistication to everything she treats. And she is a lovely writer."—Paul Robinson, Stanford University

"These essays represent a breakthrough performance, building on the author's widely admired scholarly publications but pressing out into fascinating mediations on philosophical matters inspired by the experience of music. There are gifts throughout. The chapter on The Magic Flute is by itself worth more than the price of the book."—Stanley Cavell, Harvard University

"This book, which could be described broadly as a deconstruction of musical performance, is itself a performance. It is a work of great intellectual distinction in a field that doesn't have many such. Poetic, too. Abbate is one of those few critics for whom, one feels, criticism is an art."—Joseph Kerman, University of California, Berkeley