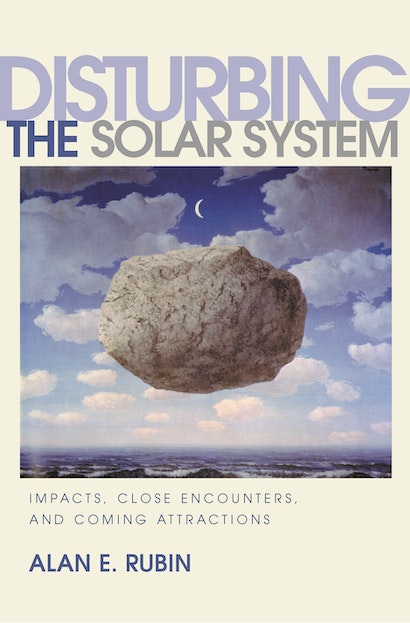 The solar system has always been a messy place in which gravity wreaks havoc. Moons form, asteroids and comets crash into planets, ice ages commence, and dinosaurs disappear. By describing the dramatic consequences of such disturbances, this authoritative and entertaining book reveals the fundamental interconnectedness of the solar system — and what it means for life on Earth.


After relating a brief history of the solar system, Alan Rubin describes how astronomers determined our location in the Milky Way. He provides succinct and up-to-date accounts of the energetic interactions among planetary bodies, the generation of the Earth’s magnetic field, the effects of other solar-system objects on our climate, the moon’s genesis, the heating of asteroids, and the origin of the mysterious tektites. Along the way, Rubin introduces us to the individual scientists — including the famous, the now obscure, and the newest generation of researchers — who have enhanced our understanding of the galactic neighborhood. He shows how scientific discoveries are made; he discusses the uncertainty that presides over the boundaries of knowledge as well as the occasional reluctance of scientists to change their minds even when confronted by compelling evidence. This fresh historical perspective reveals science as it is: an imperfect but self-correcting enterprise.


Journeying to the frontiers of knowledge, Rubin concludes with the exciting realm of astrobiology. He chronicles the history of the search for life on Mars and describes cutting-edge lines of astrobiological inquiry, including panspermia (the possible transfer of life from planet to planet), the likelihood of technologically advanced alien civilizations in our galaxy, and our probable responses to alien contact.


Authoritative and up-to-date but also entertaining and fluidly written, Disturbing the Solar System will appeal to any reader who has ever picked up a rock or gazed at the moon with a sense of wonder.

Alan E. Rubin is a research geochemist in the Institute of Geophysics and Planetary Physics at the University of California, Los Angeles. He is the author of more than 120 scientific papers. In honor of his research contributions, asteroid 6227 was named Alanrubin in 2002.

"The book is scientifically accurate, and the writing is quietly competent. . . . Nearly half of [Rubin's] chapters represent his research interests in meteorites, asteroids and impact cratering, which are important but not yet over-told tales. . . . The book ends with the now de rigueur chapters on astrobiology, including a fascinating look at how humans might react if aliens were detected."—Charles A. Wood, Nature

"From a concise but complete description of the origin of the solar system to current thinking about the search for extraterrestrial intelligence and much in between, this is an excellent read about our local astronomical neighborhood."—Choice

"This is a terrific book. . . . What really sets [Rubin's] book apart is the perspective of an active researcher. Rubin well understands that science is not an answer, but a journey. . . . This book not only provides a lesson on the inner workings of science, but also a broad overview of the importance of meteoritics and planetary science."—Timothy J. McCoy, Eos

"This book—which reflects Dr. Rubin's experience in writing and lecturing for public audiences—stands out for its focus, innovation, and appeal. Dr. Rubin synthesizes a great deal of modern research in geophysics and planetary science. His selection and treatment of subjects is fresh. Even when he targets more familiar material, he approaches it with an unconventional perspective."—E. C. Krupp, Director, Griffith Observatory