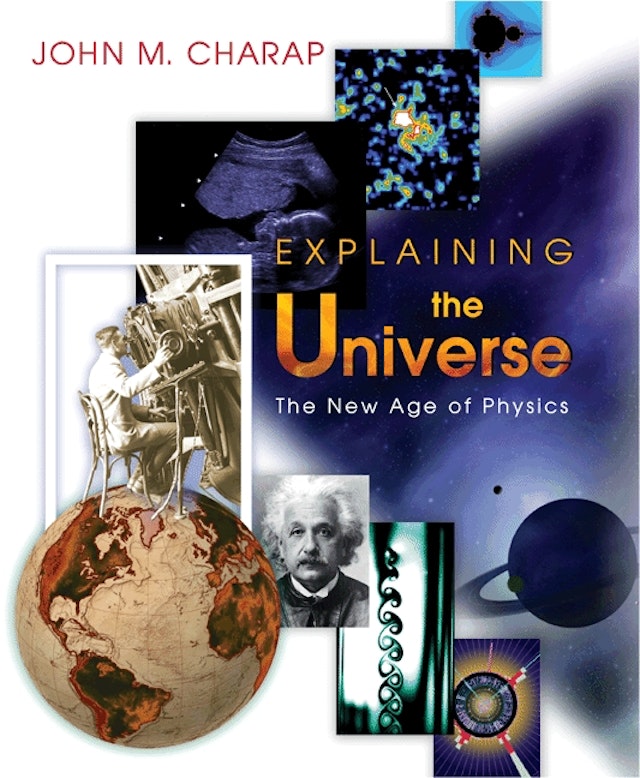 In this fascinating book, John Charap offers a panoramic view of the physicist’s world as the twenty-first century opens — a view that is entirely different from the one that greeted the twentieth century. We have learned that the universe is billions of galaxies larger than we imagined — and billions of years older. We know more about how it came to be and what it is. Because of physics, we live in a world of greater danger and more convenience, smaller particles and bigger ideas.


Charap introduces these ideas but spares us the math behind them. After a review of the twentieth century’s thorough transformation of physics, he checks in on the latest findings from particle physics, astrophysics, chaos theory, and cosmology. His tour includes ongoing efforts to find the universe’s missing matter and to account for the first moments after the big bang. Taking readers right to the field’s speculative edge, he explains how superstring theory may finally unite quantum mechanics with general relativity to produce a consistent quantum theory of gravity.


Along the way, Charap poses the questions that continue to inspire research. Why is the universe flat? Why can’t we forecast weather better? Can Schrodinger’s cat really be simultaneously dead and alive? Why does fractal geometry keep showing up in strange places? Might spacetime have eleven dimensions? What does quantum mechanics mean about the nature of our world?


In this book’s pages, the nonphysicist will accept as commonsensical Heisenberg’s uncertainty principle, and physicists can meet across specialties. Students can access physics’ critical concepts, and poets can learn a new language to describe the universe’s many wonders. Taking us from the ultraviolet catastrophe that undid the Newtonian world to tomorrow’s Theory of Everything, Charap brings today’s most fascinating science down to Earth, where we can all enjoy it.

John M. Charap is Professor of Theoretical Physics at Queen Mary, University of London. He is an internationally acclaimed particle theorist and the editor of Geometry of Constrained Dynamical Systems.

"An engaging read. . . . This is more than a simple history of physics—it is the story of our changing view of the universe."—Ignacio Birriel, Astronomy

"Among the slew of popular treatments of modern physics, Charap's effort distinguishes itself by accenting the provisional character of scientific theory. . . . Science students will find the author's palpable curiosity enticing."—Booklist

"The scope of this book is certainly ambitious. Charap attempts to cover all the crucial developments of modern physics in the 20th century. He . . . gives the whole endeavor a robustness that reflects his joy and pride at taking part in such an intellectual exercise. . . . Explaining the Universe is . . . peppered with wonderful historical anecdotes about the (mainly) men who made these discoveries. These stories help to make the book a good read."—Pedro Ferreira, Physics World

"Charap's canvas is the whole of physics at the start of the 21st century, including the structure of the universe, the bizarre objects it contains—from black holes to superclusters of galaxies—and the deep level at which it contains order. . . . Charap has an eye on the future as well as on current knowledge. He shows there is a direct link between apparently obscure science and everyday life."—Martin Ince, Times Higher Education Supplement

"In this book, a distinguished scientist gives an inside view of the advances of the last century and those that will happen in the next. It is a joy to read. The story is interesting, and John Charap knows how to tell it."—Mark Kidger, author of Star of Bethlehem: An Astronomer's View

"John Charap introduces the reader to the wonderfully broad range of topics of active research in physics. This book will be inspiring and instructive for students who might be persuaded to look more deeply into physics. . . . Charap enlivens his text with charming anecdotal illustrations. My favorite is the use of a croissant as an example of classical chaos."—P.J.E. Peebles, author of Principles of Physical Cosmology and Quantum Mechanics