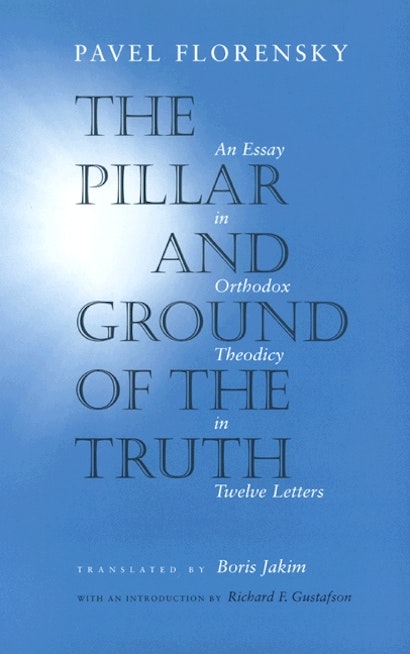 Pavel Florensky — certainly the greatest Russian theologian of the last century — is now recognized as one of Russia’s greatest polymaths. Known as the Russian Leonardo da Vinci, he became a Russian Orthodox priest in 1911, while remaining deeply involved with the cultural, artistic, and scientific developments of his time. Arrested briefly by the Soviets in 1928, he returned to his scholarly activities until 1933, when he was sentenced to ten years of corrective labor in Siberia. There he continued his scientific work and ministered to his fellow prisoners until his death four years later. This volume is the first English translation of his rich and fascinating defense of Russian Orthodox theology.


Originally published in 1914, the book is a series of twelve letters to a “brother” or “friend,” who may be understood symbolically as Christ. Central to Florensky’s work is an exploration of the various meanings of Christian love, which is viewed as a combination of philia (friendship) and agape (universal love). Florensky is perhaps the first modern writer to explore the so-called “same-sex unions,” which, for him, are not sexual in nature. He describes the ancient Christian rites of the adelphopoiesis (brother-making), joining male friends in chaste bonds of love. In addition, Florensky is one of the first thinkers in the twentieth century to develop the idea of the Divine Sophia, who has become one of the central concerns of feminist theologians.

Boris Jakim is an experienced translator of Russian religious thought. In addition to Florensky's work, he has translated the works of S. L. Frank, Vladimir Solovyov, and Sergius Bulgakov. He is also cotranslator of Ivan Goncharov's novel The Precipice.

"Recommended with enthusiasm. . . . The reader's investment will be repaid many times over."—Patrick Henry Reardon, Books & Culture

"Jakim has provided a thoughtful and accurate translation. . . . Bringing a project like this to completion is a monumental achievement."—Steven Cassedy, Russian Review

"One of the most important and controversial works of Russian religious philosophy."—Richard Pevear, translator of The Brothers Karamazov