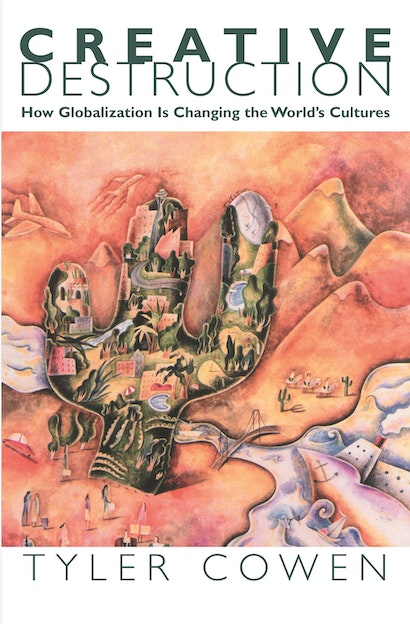 A Frenchman rents a Hollywood movie. A Thai schoolgirl mimics Madonna. Saddam Hussein chooses Frank Sinatra’s “My Way” as the theme song for his fifty-fourth birthday. It is a commonplace that globalization is subverting local culture. But is it helping as much as it hurts? In this strikingly original treatment of a fiercely debated issue, Tyler Cowen makes a bold new case for a more sympathetic understanding of cross-cultural trade. Creative Destruction brings not stale suppositions but an economist’s eye to bear on an age-old question: Are market exchange and aesthetic quality friends or foes? On the whole, argues Cowen in clear and vigorous prose, they are friends. Cultural “destruction” breeds not artistic demise but diversity.


Through an array of colorful examples from the areas where globalization’s critics have been most vocal, Cowen asks what happens when cultures collide through trade, whether technology destroys native arts, why (and whether) Hollywood movies rule the world, whether “globalized” culture is dumbing down societies everywhere, and if national cultures matter at all. Scrutinizing such manifestations of “indigenous” culture as the steel band ensembles of Trinidad, Indian handweaving, and music from Zaire, Cowen finds that they are more vibrant than ever — thanks largely to cross-cultural trade.


For all the pressures that market forces exert on individual cultures, diversity typically increases within society, even when cultures become more like each other. Trade enhances the range of individual choice, yielding forms of expression within cultures that flower as never before. While some see cultural decline as a half-empty glass, Cowen sees it as a glass half-full with the stirrings of cultural brilliance. Not all readers will agree, but all will want a say in the debate this exceptional book will stir.

Tyler Cowen is Holbert C. Harris Professor of Economics at George Mason University, where he is General Director of the Mercatus Center and the James M. Buchanan Center for Political Economy. His books include What Price Fame?, In Praise of Commercial Culture, and Risk and Business Cycles.

"Mr. Cowen's point, argued neatly in Creative Destruction, is that the invasion works both ways. Indeed, it has for such a long time that it is hard to say exactly where one culture begins and another ends. Wherever people are, almost all the cultural products that they think of as indigenous owe their existence to the cultural exchange brought about by trade."—David R. Henderson, Wall Street Journal

"A short but rich study. . . . The book's basic point is that cultural globalization can increase the diversity of choices for the individual while reducing the diversity between societies across the globe. . . . Mr. Cowen underscores that cultural globalization is and always has been a dynamic process. . . . It can be an unsettling, disruptive process, but Mr. Cowen's book argues persuasively that it is a more creative way to go than the misguided cultural nostalgia peddled by the anti-globalization crowd."—David R. Sands, The Washington Times

"Cowen has created a text at once impressively academic and thoroughly accessible."—Library Journal

"Cowen's thesis is that diversity within society is heightened by globalization, at the same time that diversity across societies, as he puts it, is diminished. . . . His book is an attempt to take a realistic look at the changes wrought by today's market-driven, free trade-oriented world."—Philip Marchand, The Toronto Star

"Cowen argues that global trade and communication are enriching all the world's cultures and that there's no such thing as cultural authenticity. . . . In fact, Cowen believes that commerce and art are allies. And he contends that because commerce is driving technology, ideas, goods, services and people across borders more freely than ever before, we are in the midst of an unprecedented boom in creativity all over the world. The quality, quantity and variety of cultural output is greater than ever; if there is more dreck, there is also more genius. And more people have more access to it than ever, at lower prices, regardless of where they live."—Daniel Akst, Los Angeles Times

"Creative Destruction is a brilliant book—by far the most original and sophisticated analysis of the place of art in the global market economy that I have seen. It is also extraordinarily readable. In clear and energetic prose, Tyler Cowen provides an economic analysis of a breathtaking variety of artistic cultures—from the restaurants of Paris to the soapstone carvings of the Inuit, from Nbebele bead art of South Africa to Tuvan throat singers in Mongolia."—John Tomasi, Brown University, author of Liberalism Beyond Justice

"Reading this book was a joy. The number of new books on globalization is large. But Creative Destruction adds a unique perspective. It constructs a largely economic case for optimism, the idea that globalization is not necessarily in conflict with cultural diversity but might instead promote, revive, and broaden traditional cultures. Many readers will find this argument both original and provocative. And the examples make for very entertaining reading."—Timur Kuran, University of Southern California, author of Private Truths, Public Lies

"Tyler Cowen is an economist who knows which rap artists are the best, what kind of Persian rug from which period is the best, which period of French cinema is the best, and what kind of Afropop is best. But he also has explanations for why they are the best, explanations that draw upon concepts from economics and other social sciences. Cowen, perhaps more thoroughly than anyone before, celebrates and details the changes in world culture which result from world trade and contact, in a word, "globalization." He is well aware of globalization's homogenizing dangers but convincingly argues that its unexpected benefits, in increasing "hybridity" as well as "authenticity," are not fully appreciated."—Michael Suk-Young Chwe, University of California, Los Angeles, author of Rational Ritual, Culture, Coordination, and Common Knowledge