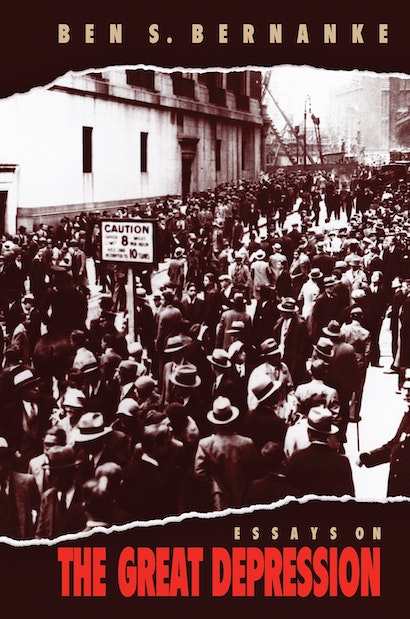 Few periods in history compare to the Great Depression. Stock market crashes, bread lines, bank runs, and wild currency speculation were worldwide phenomena — all occurring with war looming in the background. This period has provided economists with a marvelous laboratory for studying the links between economic policies and institutions and economic performance. Here, Ben Bernanke has gathered together his essays on why the Great Depression was so devastating.


This broad view shows us that while the Great Depression was an unparalleled disaster, some economies pulled up faster than others, and some made an opportunity out of it. By comparing and contrasting the economic strategies and statistics of the world’s nations as they struggled to survive economically, the fundamental lessons of macroeconomics stand out in bold relief against a background of immense human suffering. The essays in this volume present a uniquely coherent view of the economic causes and worldwide propagation of the depression.

Ben S. Bernanke is a member of the Board of Governors of the U.S. Federal Reserve System. He is on leave from Princeton University, where he is the Howard Harrison and Gabrielle Snyder Beck Professor of Economics and Public Affairs. He is author of many publications and coauthor of the recent Princeton University Press book, Inflation Targeting: Lessons from the International Experience.

"[H]aving devoted much of his career to studying the causes of the Great Depression, Bernanke was the academic expert on how to prevent financial crises from spinning out of control and threatening the general economy. One line from his Essays on the Great Depression sounds especially prescient today: 'To the extent that bank panics interfere with normal flows of credit, they may affect the performance of the real economy.'"—Roger Lowenstein, New York Times Magazine

"Bernanke is the master of applied microeconomics. Not only is he technically proficient but his ability to place his results in a larger macroeconomic context is unparalleled."—Mark Toma, Financial History Review

"Mr. Bernanke certainly knows the importance of well-functioning markets. In Essays on the Great Depression he wrote persuasively that runs on the banks and extensive defaults on loans reduced the efficiency of the financial sector, prevented it from doing its normal job in allocating resources, and contributed to the Depression severity. The Depression-era problems he studied are mirrored by similar issues today, and they need urgent attention."—Robert J. Shiller, New York Times

"Fortunately, before he became entangled in these restrictions [Bernanke] did edit and help write a book, Essays on the Great Depression. . . . Mr. Bernanke's motive was that understanding the depression would provide important clues to what can go wrong with capitalist market systems."—Samuel Brittan, Financial Times

"The financial crisis has made Federal Reserve Chairman Ben Bernanke's book Essays on the Great Depression a hot seller. . . . Bernanke, a former Princeton University economist, is considered the pre-eminent living scholar of the Great Depression. He is practicing today what he preached in his book: Flood the system with money to avoid a depression."—Dennis Cauchon, USA Today

"When Ben Bernanke arrived at the Federal Reserve in February 2006 as the new chairman of the central bank, he had a copy of his 2001 book, Inflation Targeting: Lessons from the International Experience, tucked under his arm. Not literally, of course. He was hoping to convince his colleagues on the Federal Open Market Committee of the value of an explicit inflation target. Little did he know that less than two years later he'd be shelving Inflation Targeting and turning to Essays on the Great Depression, another of his books, for guidance. In his book of essays, Bernanke calls the Great Depression the 'Holy Grail of macroeconomics.' He writes that 'the experience of the 1930s continues to influence macroeconomists' beliefs, policy recommendations, and research agendas.'"—Caroline Baum, Bloomberg.com

"With some observers saying that the ongoing financial crisis could be the worst since the Great Depression, the greatest living expert on that period is getting the chance to apply its economic lessons. . . . In Essays on the Great Depression . . . [Bernanke] notes that understanding that period is the 'holy grail of macroeconomics.'"—Spencer Jakab, Dow Jones Newswires

"This influential body of work is a significant contribution to our understanding the depth and persistence of the Great Depression.... This book will become a standard reference in the field of business cycle research."—Randall Kroszner, University of Chicago

"Bernanke's work has had a powerful impact on the economics profession, alerting macroeconomists to the advantages of historical analysis, and a number of important figures (James Hamilton, Steve Cecchetti, for example), inspired by his work, have followed him into the field. The nine essays form a remarkably coherent whole."—Barry Eichengreen, University of California, Berkeley, and author of Globalizing Capital: A History of the International Monetary System

"Collecting these essays together will provide a single source for students to find Bernanke's substantial contributions.... His papers demonstrate conclusively that the international view of the great depression has impressive explanatory power."—Peter Temin, Massachusetts Institute of Technology