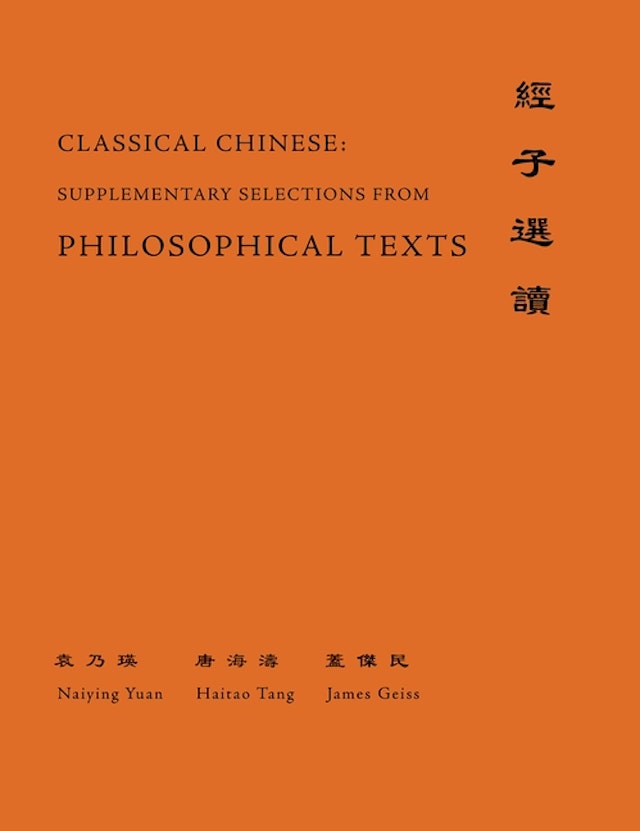 Classical Chinese: Selections from Philosophical Texts continues the rigorous standard set forth in the main, three-volume Classical Chinese: A Basic Reader. Organized into four sections, this supplementary volume sets forth the key concepts and writings of Confucius, Mencius, Laozi, and Zhuangzi-providing key insight into their beliefs and literary styles. The beauty of these original texts and the insightful annotations that accompany them will provide students of Chinese with a glimpse into the fountainhead of China’s intellectual tradition.


The main text and its four supplementary volumes together represent the most comprehensive and authoritative textbook on the language, literature, philosophy, history, and religion of premodern China. Rigorously and extensively field-tested and fine-tuned for years in classroom settings by three members of the Chinese Linguistics Project at Princeton University, it sets a new standard for the field. With Classical Chinese: A Basic Reader and its supplementary volumes, Naiying Yuan, Haitao Tang, and James Geiss provide the definitive new resource for students and instructors of classical Chinese language and culture, one whose impact will be lasting.

Naiying Yuan and Haitao Tang are Lecturers Emeritus in the Department of East Asian Languages, and in the Chinese Linguistics Project, at Princeton University. Tang is coauthor of Chinese Primer, an introductory Chinese language textbook (Princeton). James Geiss, who earned his Ph.D. from Princeton University in 1979, was a Ming scholar and worked for many years as research associate, editor, and contributing author with the Cambridge History of China Project.