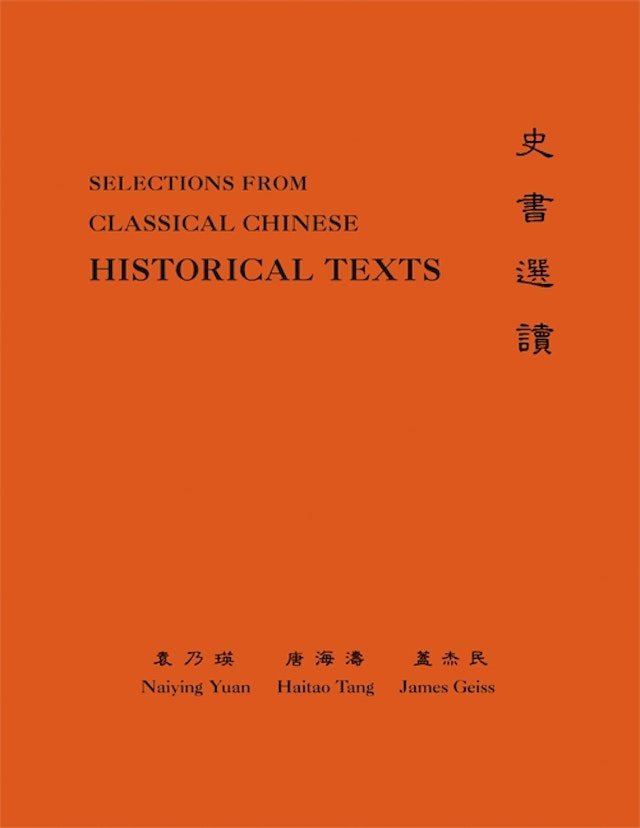 Selections from Classical Chinese: Historical Texts aims to instruct, inform, and inspire students of Chinese by presenting selected historical texts and their annotations. Taken from the seminal works known as the Four Histories, the fourteen included texts offer insights into the political, social, economic, and cultural aspects of China over a long period of time. The comprehensive annotations provide full pronunciation in pinyin, the grammatical function of individual words, and a full explication of the texts.


One of the supplementary readings to Classical Chinese: A Basic Reader, this volume includes eight selections from the Shi Ji and two each from the Han Shu, the Hou Han Shu, and the San Guo Zhi. Each unfolds a fascinating account of the historical events and figures that represent certain salient values or distinctive cultural characteristics of what has come to be the Chinese tradition.


The Shi Ji, a grand history by Sima Qian chronicling three thousand years of Chinese history, is divided into five sections of 130 chapters. Sima Qian is especially noted for his biographical style, and his work is considered the first and only “universal history” of China. The Han Shu, by Ban Gu, recounts the history of a single dynasty and is known for its dynastic style in depicting history. Together, these two histories represent paradigms of Chinese historiography. The Hou Han Shu, by Fan Ye, and the San Guo Zhi, by Chen Shou, continue this tradition of excellence. These four works are known collectively as the Four Histories.


All texts are fully annotated to include a pinyin version marking the pronunciation of each word, glosses of each word by grammatical function and its meaning in the text, as well as detailed explication of each word. The exercises at the end of each selection are intended to help students apply newly gained knowledge, better appreciate Chinese history, and stimulate interest in additional reading.

Naiying Yuan and Haitao Tang are Lecturers Emeritus in the Department of East Asian Languages, and in the Chinese Linguistics Project, at Princeton University. Tang is coauthor of Chinese Primer, an introductory Chinese language textbook (Princeton). James Geiss, who earned his Ph.D. from Princeton University in 1979, was a Ming scholar and worked for many years as research associate, editor, and contributing author with the Cambridge History of China Project.

"The present handbook provides a very interesting compilation of historical fragments, and a practical teaching tool. It offers a useful basis for a class discussion on the language and culture of Early China"—Ann Heirman, Linguistics