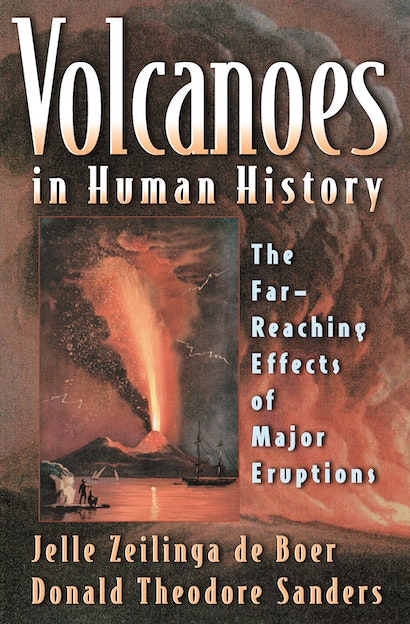 When the volcano Tambora erupted in Indonesia in 1815, as many as 100,000 people perished as a result of the blast and an ensuing famine caused by the destruction of rice fields on Sumbawa and neighboring islands. Gases and dust particles ejected into the atmosphere changed weather patterns around the world, resulting in the infamous ”year without a summer” in North America, food riots in Europe, and a widespread cholera epidemic. And the gloomy weather inspired Mary Shelley to write the gothic novel Frankenstein.


This book tells the story of nine such epic volcanic events, explaining the related geology for the general reader and exploring the myriad ways in which the earth’s volcanism has affected human history. Zeilinga de Boer and Sanders describe in depth how volcanic activity has had long-lasting effects on societies, cultures, and the environment. After introducing the origins and mechanisms of volcanism, the authors draw on ancient as well as modern accounts — from folklore to poetry and from philosophy to literature. Beginning with the Bronze Age eruption that caused the demise of Minoan Crete, the book tells the human and geological stories of eruptions of such volcanoes as Vesuvius, Krakatau, Mount Pelée, and Tristan da Cunha. Along the way, it shows how volcanism shaped religion in Hawaii, permeated Icelandic mythology and literature, caused widespread population migrations, and spurred scientific discovery.


From the prodigious eruption of Thera more than 3,600 years ago to the relative burp of Mount St. Helens in 1980, the results of volcanism attest to the enduring connections between geology and human destiny.

Jelle Zeilinga de Boer is the Harold T. Stearns Professor of Earth Science at Wesleyan University. His publications include work on the geodynamic evolution of the Appalachians, Costa Rica, Greece, Panama, and the Philippines. Donald Theodore Sanders has worked as a petroleum geologist, a science editor for encyclopedias, and an editor of corporate scientific publications. Before retiring from IBM, he created and edited that company's award-winning academic magazine Perspectives in Computing. Zeilinga de Boer and Sanders are also the coauthors of Earthquakes in Human History (Princeton).

"Does the world need another book about volcanic eruptions and the havoc they wreak? The answer, for this book, is an emphatic 'yes,' especially for the general reader. [B]esides being interesting to read, Volcanoes in Human History clearly demonstrates that volcanism, and geology as a whole, should not be of concern only to geologists and that history is important."—Sally Newcomb, Isis

"The authors have applied their geologic knowledge and experience, along with solid research, to produce an accessible book on volcanoes."—Library Journal

"In clear prose aimed to include general readers, the authors make the case for the social consequences set in motion by large volcanic eruptions as both wide-ranging and long-lived."—Choice

"A detailed and vivid account of the fiery relationship between the Earth and its surface dwellers."—The Guardian

"Most people seldom think about volcanoes or the role they have played in human history. Jelle Zeilinga de Boer and Donald Theodore Sanders . . . examine the relationship between volcanoes and human history. . . . [Their] chilling examples show the profound impact volcanic eruptions have had upon humans. The incredible story has taken centuries to unfold and will surely continue to evolve."—Dr. Robert D. Ballard, President, Institute for Exploration, Mystic, Connecticut

"There is a growing awareness of the interplay between natural disasters and human societies, putting this book at the cutting edge of an important trend. It integrates science with societal issues in a way that is compelling and interesting. With its informative but nontechnical style, it should appeal to both scientists and nonspecialists."—Susan Hough, U.S. Geological Survey