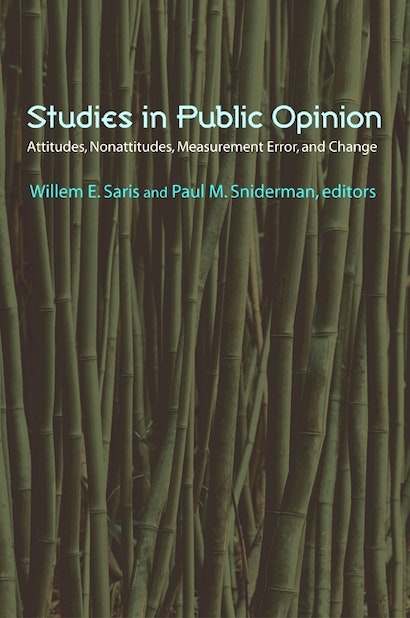 In democratic societies, opinion polls play a vital role. But it has been demonstrated that many people do not have an opinion about major issues — the “nonattitudes” problem. Also, the framing of questions in different ways can generate very different estimates of public opinion — the “framing” effect. Both dilemmas raise questions about the competence of ordinary citizens to play the role a democratic society ostensibly expects of them. Although the impact of some factors is well established, particularly political information and sophistication, much is yet to be understood.


Building on and reaching beyond themes in the work of Philip Converse, one of the pioneers in the study of public opinion, Studies in Public Opinion brings together a group of leading American and European social scientists to explore a number of new factors, with a particular emphasis on the structure of political choices. In twelve chapters that reflect different perspectives on how people form political opinions and how these opinions are manipulated, this book offers an unparalleled view of the state-of-the-art research on these important questions as it has developed on two continents.

"Addressing an extremely important topic, this book can generate a new level of understanding about response instability and, more generally, the role of low information voters in democratic governance. It goes a long way to getting us out of a rut in which we have been stuck for a long time. Individual works have challenged Converse's inferences for decades. But Studies in Public Opinion represents a systematic and multifaceted challenge that takes advantage of diverse intellectual currents, a challenge mounted by a formidable group of scholars from two continents. The editors have done a very good job of pulling together some state of the art scholarship on the topic."—Peter Nardulli, University of Illinois

"This collection is distinguished by the quality of the individual essays and the unity of the themes. Questions of nonattitudes and the effects of political sophistication are central to political psychology, and so no one in the field should pass up this book."—Robert Jervis, Columbia University, author of System Effects: Complexity in Political and Social Life