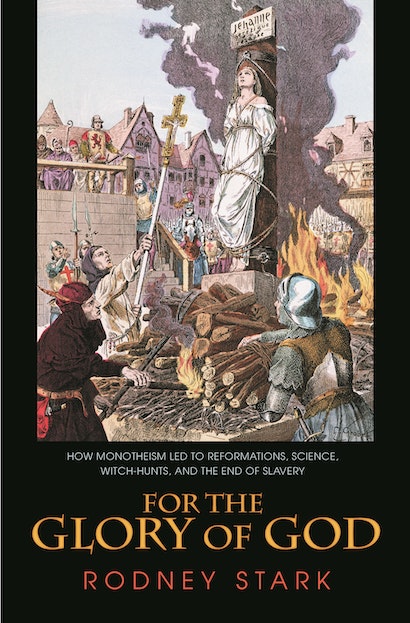 Rodney Stark’s provocative new book argues that, whether we like it or not, people acting for the glory of God have formed our modern culture. Continuing his project of identifying the widespread consequences of monotheism, Stark shows that the Christian conception of God resulted — almost inevitably and for the same reasons — in the Protestant Reformation, the rise of modern science, the European witch-hunts, and the Western abolition of slavery. In the process, he explains why Christian and Islamic images of God yielded such different cultural results, leading Christians but not Muslims to foster science, burn “witches,” and denounce slavery.


With his usual clarity and skepticism toward the received wisdom, Stark finds the origins of these disparate phenomena within monotheistic religious organizations. Endemic in such organizations are pressures to maintain religious intensity, which lead to intense conflicts and schisms that have far-reaching social results.


Along the way, Stark debunks many commonly accepted ideas. He interprets the sixteenth-century flowering of science not as a sudden revolution that burst religious barriers, but as the normal, gradual, and direct outgrowth of medieval theology. He also shows that the very ideas about God that sustained the rise of science led also to intense witch-hunting by otherwise clear-headed Europeans, including some celebrated scientists. This conception of God likewise yielded the Christian denunciation of slavery as an abomination — and some of the fiercest witch-hunters were devoted participants in successful abolitionist movements on both sides of the Atlantic.

For the Glory of God is an engrossing narrative that accounts for the very different histories of the Christian and Muslim worlds. It fundamentally changes our understanding of religion’s role in history and the forces behind much of what we point to as secular progress.

Rodney Stark was for many years Professor of Sociology and of Comparative Religion at the University of Washington. In 2004 he became University Professor of the Social Sciences at Baylor University. He is the author of many books, among them The Rise of Christianity and One True God (both Princeton).

"[Stark] writes with a clarity and concision that make him a pleasure to read. . . . A number of fondly held myths get demolished in this book."—David Klinghoffer, National Review

"This is a sociology of religion that takes seriously what people believe. Stark knows that beliefs have consequences. They can even change the course of history."—David Neff, Christianity Today

"For the Glory of God . . . is an important book. It is immensely learned, consistently contentious, and filled with brilliant, if sometimes eccentric, insights. . . [F]or those who are open to a very different interpretation of the development of Western Civilization ... For the Glory of God is strongly recommended."—First Things

"I unequivocally recommend this book. Iconoclastic toward the conventional iconoclasts, it is likely to meet with considerable furor."—David Martin, author of Does Christianity Cause War?

"This important and brilliant new book makes a number of points desperately needed to be understood by academics, teachers, and lay people. The conventional wisdom on science, religion, witchcraft, slavery, and sects is unfortunately both firmly and falsely fixed. This book will clear up the muddle for anyone open minded enough to learn from it."—Jeffrey Burton Russell, author of A History of Heaven