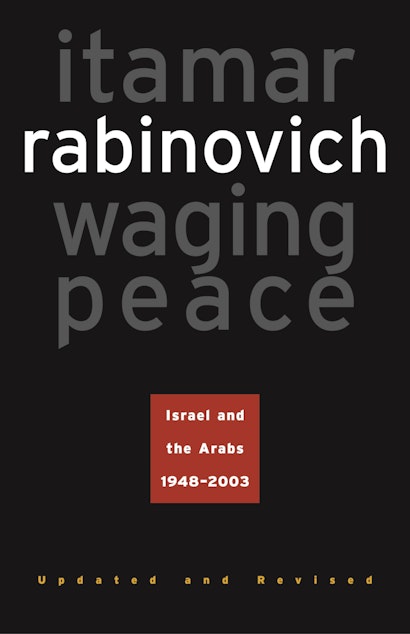 Considerably expanded to include the impact of the 2003 war in Iraq and its aftermath, this new edition of Waging Peace provides a unique insight into the critical debate on the future of peace in the Middle East. A former chief negotiator for Israel, noted scholar-diplomat Itamar Rabinovich examines the complete history of Arab-Israeli relations beginning in 1948. He then gives a vivid account of the peace processes of 1992-1996 and the more dispiriting record since then. His updated analysis on Iraq, Ehud Barak, and Ariel Sharon — and on the expanding role of the United States in the Middle East — sheds new light on the long and tumultuous history between Arabs and Jews.


As Rabinovich brings the conflict into this century, he widens the scope of his proposals for achieving normalized and peaceful Arab-Israeli relations. While he considers the conflict between Israel and the Palestinians — a classic dispute between two national movements claiming the same land — Rabinovich also studies the broader political, cultural, and increasingly religious conflict between Israel and Arab nationalism and discusses the region in an international context.


Rabinovich’s firsthand experiences as a negotiator and an ambassador provide an extraordinary perspective on the major players involved. The result is a shrewd assessment of the past and current state of affairs, as well as a hopeful look at the possibilities for a peaceful future.

Itamar Rabinovich is President of Tel Aviv University and Andrew White Professor-at-Large at Cornell University. He was Israel's chief negotiator with Syria (1992-1995) and Israel's ambassador to the United States (1993-1996). He is the author of several books, including Syria under the Ba'th; The Road Not Taken: Early Arab-Israeli Negotiations; and The Brink of Peace: The Israeli-Syrian Negotiations (Princeton).

"Rabinovich offers a masterful overview without wasting a word."—Foreign Affairs

"A keen strategic mind is at work in Waging Peace—dovish but tough, focused on the big picture yet ever attentive to particulars. This eloquent book is essential reading for anyone following the Arab-Israeli peace process."—Mitchell Cohen, New York Time Book Review

"[Waging Peace] is calm, dispassionate, impersonal, unusually well-informed. . . . Rabinovich is not a polemicist given to flourishes of rhetoric. . . . [He possesses a] keen strategic mind."—Amos Elon, New York Review of Books

"In Waging Peace, Itamar Rabinovich offers a good diplomatic history of how the Israeli-Palestinian peace process unraveled. Ultimately, the former ambassador believes not only that Arafat 'failed the test of leadership' but that the broader Arab world's rejection of normal ties with Israel keeps the door of war perpetually open."—Jerusalem Post

"In this updated edition of Waging Peace, Itamar Rabinovich once again brilliantly combines the firsthand insight of a diplomat with the analytical rigor of a scholar. I can think of no better guide to lead us through the political imperatives at the root of the Israel-Palestine conflict."—Henry Kissinger

"Itamar Rabinovich brings to this topic both the experience of a veteran participant and the skill of a distinguished historian. The result is a fascinating and illuminating narrative and analysis. His added coverage of the events of the last four years is particularly valuable."—Bernard Lewis, author of What Went Wrong