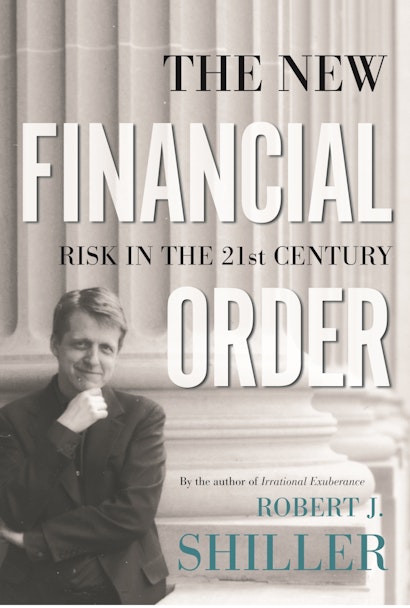 In his best-selling Irrational Exuberance, Robert Shiller cautioned that society’s obsession with the stock market was fueling the volatility that has since made a roller coaster of the financial system. Less noted was Shiller’s admonition that our infatuation with the stock market distracts us from more durable economic prospects. These lie in the hidden potential of real assets, such as income from our livelihoods and homes. But these ”ordinary riches,” so fundamental to our well-being, are increasingly exposed to the pervasive risks of a rapidly changing global economy. This compelling and important new book presents a fresh vision for hedging risk and securing our economic future.


Shiller describes six fundamental ideas for using modern information technology and advanced financial theory to temper basic risks that have been ignored by risk management institutions — risks to the value of our jobs and our homes, to the vitality of our communities, and to the very stability of national economies. Informed by a comprehensive risk information database, this new financial order would include global markets for trading risks and exploiting myriad new financial opportunities, from inequality insurance to intergenerational social security. Just as developments in insuring risks to life, health, and catastrophe have given us a quality of life unimaginable a century ago, so Shiller’s plan for securing crucial assets promises to substantially enrich our condition.


Once again providing an enormous service, Shiller gives us a powerful means to convert our ordinary riches into a level of economic security, equity, and growth never before seen. And once again, what Robert Shiller says should be read and heeded by anyone with a stake in the economy.

Robert J. Shiller is the Stanley B. Resor Professor of Economics at Yale University. He is the author of Macro Markets, which won the first annual Paul A. Samuelson Award of TIAA-CREF, and Irrational Exuberance (Princeton), which was a New York Times bestseller.

"Shiller's ambition is exhilarating, and gives his work something that most business books lack; a deep sense of how economic ideas might transform people's everyday lives."—The New Yorker

"Certain to be controversial."—Publishers Weekly

"It is an understatement to say Shiller's book raises complex political, legal and economic questions. Some will probably never happen. But The New Financial Order is still worth a look. It casts some long-standing social problems in a new light, and it puts some fascinating ideas on the table."—Andrew Cassel, Philadelphia Inquirer

"While [his] ideas may sound unfamiliar—even radical—Shiller's reasoned case recalls earlier financial innovations such as stock and futures markets, life and unemployment insurance, and earned income tax credits. The earlier innovations addressed the financial and risk management needs of individuals and societies in the same way Shiller proposes for his concepts."—Library Journal

"The good news, on Professor Shiller's analysis, is that it is now possible to conceive and construct trade-able indices that will allow insurers to offer protection against such things as industrial decline and demographically-induced pension shortfalls. If we all knew such insurance was available, we could afford more risks with our choice of career, to the benefit of the economy. Creativity is the lifeblood of capitalist economics. Emotional worries about the risk of unemployment are one of the biggest threats to continued innovation. . . . The data and technology to make a market in such things exists. All that is lacking, Professor Shiller says, is the will to make them a commercial reality."—Jonathan Davis, The Independent

"There are financial markets that help us manage fluctuations in corporate profitability and commodity prices. But there are no markets to help manage risks from fluctuations in labor markets and housing markets, even though these have a much bigger impact on most peoples' financial security. How could we design markets to help manage such risks? This challenging problem is examined in Robert J. Shiller's book The New Financial Order."—Hal R. Varian, New York Times

"Livelihood insurance. Income-linked loans. Inequality insurance. These are some of the bold and imaginative ideas suggested by Robert Shiller. . . . [W]hile the practical barriers to some of Shiller's suggestions may be immense, there is much that is stimulating in this book. If one were to look 30 years ahead, it would be foolish to bet against at least one of his ideas being widely adopted."—Philip Coggan, Financial Times

"[Shiller's] ideas are striking, to put it mildly. . . . Mr. Shiller himself is doubtful that all his ideas will be adopted. But his book, which contains some fascinating history, is at the very least thought-provoking."—The Economist

"Unemployment is up. Housing sales are weakening. Oil prices continue to fluctuate, and the stock market remains volatile. There's no doubt we live in risky times, yet our tools for managing risk are limited. . . . How could we design markets to help manage such risks? This challenging problem is examined in Robert J. Shiller's book. . . . Here Mr. Shiller turns to the role of financial institutions in managing risk. . . . It is said that behind every successful man is a surprised mother-in-law. If so, there could be quite a large market for such securities."—Hal R. Varian, New York Times

"Millions of individual investors could have saved themselves enormous sums of money, and an equivalent amount of grief, by taking Robert Shiller's advice three years ago. . . . Now Shiller is back with another book that also holds warnings of sorts—this time about societal wealth inequalities and the need to mitigate what he calls 'the risks that rally matter in our lives.' If Irrational Exuberance was a sober assessment of a situation that was well known yet widely defended—the nation's infatuation with stocks—The New Financial Order is a dissertation on problems many people don't know they have. . . . Shiller, however, has let his imagination run in this book."—Tom Petruno, Los Angeles Times

"In a non-technical way, Shiller engages readers in a wide-ranging consideration of risk and introduces novel ideas concerning the ways people identify, view, and guard against risk. . . . This topic may seem to appeal to a limited audience, but the author's style enables him to broach what might have been tedious topics in an entertaining way."—Choice

"Shiller has proved even bolder than we thought. . . . His ambitions are global and systemic. Shiller wants nothing less than to inspire and guide the redesign of the world financial system. The New Financial Order is ... a step-by-step description of what should be done to limit the damage done to people, and even entire nations, by capitalism's creative destruction."—Peter Coy, Business Week

"Robert Shiller has the remarkable ability to think independently and the courage to propose ideas that to middlebrow thinkers may sound speculative. Think of what your reaction would have been had someone discussed risksharing (insurance) before it became popular. . . . Throughout his career Shiller has stood for unpopular ideas and has been proven right (his 1981 paper on volatility, his 2000 discussion of the bubble). I would read and re-read this book."—Nassim Nicholas Taleb, author of Fooled by Randomness: The Hidden Role of Chance in the Markets and in Life

"Bob Shiller has done it again. In The New Financial Order, he tells how innovations in risk management can better the lives not just of the rich, but of the poor and the middle class, insuring against the most serious risks that face us all. There is something for everyone in this brilliant book. It foretells where financial markets are headed in the coming century."—George A. Akerlof, Goldman Professor of Economics, University of California, Berkeley, and Nobel Laureate in Economics

"As the worldly philosophers of the past affirmed, the goal of economics is to improve the way society functions. In The New Financial Order, Robert Shiller joins this proud tradition by directing his brilliant economic skills toward the creation of financial institutions designed to reduce the risks an unknown future visits on most members of our society and others. Shiller's imaginative and compelling analysis will appeal to all readers who share his passion for initiating not only a richer, but a better, century."—Peter L. Bernstein, author of Against the Gods: The Remarkable Story of Risk

"Robert Shiller's book, The New Financial Order, is an important work on a significant topic."—Joseph E. Stiglitz, author of Globalization and its Discontents, and Nobel Laureate in Economics

"This is one of those rare books that really captures the imagination by offering fresh ideas, that makes you think and at the same time is rigorous and serious. It's hard to exaggerate how unusual and exciting this is to a reader. One of the book's real joys is the way it captures the passion of economics for making people's lives better."—Diane Coyle, author of The Weightless World and Sex, Drugs, and Economics

"Shiller is a real visionary, and this book will be widely read and discussed. It suggests a remedy for a situation begging to be remedied: we live in an age of great material wealth, but equally great economic insecurity."—Herbert Gintis, University of Massachusetts, Amherst, and the Santa Fe Institute

"Robert Shiller's book, The New Financial Order, is an important work on a significant topic."—Joseph E. Stiglitz, author of Globalization and its Discontents, and Nobel Laureate in Economics

Introduction
For more information on this book, visit the author’s site at: http://www.econ.yale.edu/~shiller/