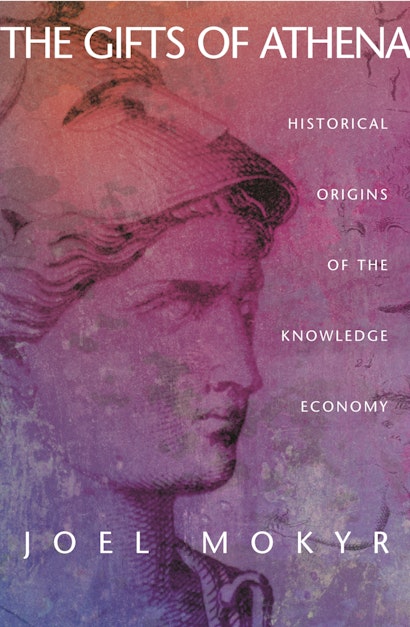 The growth of technological and scientific knowledge in the past two centuries has been the overriding dynamic element in the economic and social history of the world. Its result is now often called the knowledge economy. But what are the historical origins of this revolution and what have been its mechanisms? In The Gifts of Athena, Joel Mokyr constructs an original framework to analyze the concept of “useful” knowledge. He argues that the growth explosion in the modern West in the past two centuries was driven not just by the appearance of new technological ideas but also by the improved access to these ideas in society at large — as made possible by social networks comprising universities, publishers, professional sciences, and kindred institutions. Through a wealth of historical evidence set in clear and lively prose, he shows that changes in the intellectual and social environment and the institutional background in which knowledge was generated and disseminated brought about the Industrial Revolution, followed by sustained economic growth and continuing technological change.


Mokyr draws a link between intellectual forces such as the European enlightenment and subsequent economic changes of the nineteenth century, and follows their development into the twentieth century. He further explores some of the key implications of the knowledge revolution. Among these is the rise and fall of the “factory system” as an organizing principle of modern economic organization. He analyzes the impact of this revolution on information technology and communications as well as on the public’s state of health and the structure of households. By examining the social and political roots of resistance to new knowledge, Mokyr also links growth in knowledge to political economy and connects the economic history of technology to the New Institutional Economics. The Gifts of Athena provides crucial insights into a matter of fundamental concern to a range of disciplines including economics, economic history, political economy, the history of technology, and the history of science.

"For most economists, Mr. Mokyr included, the Industrial Revolution is categorically different from everything that preceded it. . . . [He] suggests that, over time, growth will win out, if only because the power of certain ideas is greater than the resistance to them. So much the better."—Nic Schulz, Wall Street Journal

"[A] masterful addition to literatures of economic history and economic growth. The product of a lifetime of scholarly study and reflection, Mokyr's book plainly did not spring full-blown from the head of Zeus. It merits a wide readership."—William F. Shughart II, EH.Net

"The Gifts of Athena is an impressive study that clearly reveals Mokyr's mastery of a large literature on industrialization and economic growth. . . . Joel Mokyr has long concerned himself with big questions and making connections that delineate historical processes in new and interesting ways. The Gifts of Athena with its special emphasis on the centrality of the 'knowledge economy,' amply testifies to his stature as a leading historian of the Industrial Revolution."—Merritt Roe Smith, Isis

"[A] fascinating, magisterial investigation into the wellsprings of modern economic growth and improved living standards. . . . The Gifts of Athena is a big-idea history book, a complex tale that interweaves science, technology, economics, sociology, and political science. . . . This is one that will stand the test of time."—Christopher Farrell, Business Week

"Mokyr argues that knowledge is the key to understanding many of the most important developments in the past two centuries. The book is impressively wide ranging in its scope, containing a vast array of information and ideas. . . . I would hesitate to say the Mokyr has solved the problems of why the industrial revolution happened, but he would appear to have advanced the story a long way. This book is a fascinating integration of intellectual and economic history"—Roger E. Backhouse, American Historical Review

"Situated firmly at the intersection of several disciplines—the history of science and technology, economic history, and economics—this fascinating and stimulating book explores the relationships among the expansion of knowledge, technological change, and economic growth since the 18th century."—Choice

"Joel Mokyr, as one of the most important economic historians of our time, has written an instructive book about the knowledge-based origins of the rise and the future persistence of the Western World. . . . This book should be read not only by scholars, but also by politicians!"—Helmut Braun, Journal of European Economic History

"Everyone talks about knowledge and technology, but Mokyr's brilliant book is the rare exception that talks about the what, when, why, and where of the knowledge revolution. The book skillfully navigates a vast territory from the Industrial Revolution to the World Wide Web, from the revolution in health to that in housework, from technophobia to institutions. Mokyr demolishes stereotypes and generates a steady stream of fresh facts and insights that keep you turning the pages."—William Easterly, New York University, author of The Elusive Quest for Growth

"Economists, historians, and people who care about human progress will have to pay serious attention to Joel Mokyr's account of the role of knowledge in fueling economic development. He appears to be right about the West, and the implications for developing countries and their spending on education are staggering."—Margaret C. Jacob, University of California at Los Angeles

"The benefits of knowledge for health and wealth have been axiomatic for centuries. Showing just how science, technology, and medicine actually pay off is still not simple. The Gifts of Athena bridges history and economics with unusual learning and originality. Wise owls will want this book."—Edward Tenner, author of Why Things Bite Back: Technology and the Revenge of Unintended Consequences

"This is a splendid book. Highly illuminating and often strikingly original, it will be valuable to economists and economic theorists as well as to historians of all sorts but also, thanks to Mokyr's lively, often-provocative writing style, to a much wider audience."—Nathan Rosenberg, Stanford University, author of Exploring the Black Box

"An excellent and much-needed book. The Gifts of Athena embraces the varied scientific breakthroughs that eventuated in both modern economic growth and rapidly rising life expectancy. Mokyr's intellectual scope is impressive, and he has done scholars a great service by creating this pathbreaking work. The need for knowledge of this type, especially among economists, is great."—Richard A. Easterlin, University of Southern California, author of Growth Triumphant