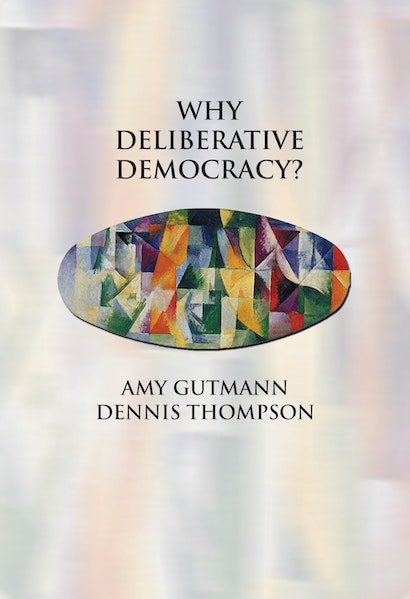 The most widely debated conception of democracy in recent years is deliberative democracy — the idea that citizens or their representatives owe each other mutually acceptable reasons for the laws they enact. Two prominent voices in the ongoing discussion are Amy Gutmann and Dennis Thompson. In Why Deliberative Democracy?, they move the debate forward beyond their influential book, Democracy and Disagreement.


What exactly is deliberative democracy? Why is it more defensible than its rivals? By offering clear answers to these timely questions, Gutmann and Thompson illuminate the theory and practice of justifying public policies in contemporary democracies. They not only develop their theory of deliberative democracy in new directions but also apply it to new practical problems. They discuss bioethics, health care, truth commissions, educational policy, and decisions to declare war. In “What Deliberative Democracy Means,” which opens this collection of essays, they provide the most accessible exposition of deliberative democracy to date. They show how deliberative democracy should play an important role even in the debates about military intervention abroad.

Why Deliberative Democracy? contributes to our understanding of how democratic citizens and their representatives can make justifiable decisions for their society in the face of the fundamental disagreements that are inevitable in diverse societies. Gutmann and Thompson provide a balanced and fair-minded approach that will benefit anyone intent on giving reason and reciprocity a more prominent place in politics than power and special interests.

Amy Gutmann and Dennis Thompson previously coauthored Democracy and Disagreement (Harvard). Gutmann is President of the University of Pennsylvania and Professor of Political Science at the same institution. Her most recent book is Identity in Democracy (Princeton). Dennis Thompson is Alfred North Whitehead Professor of Political Philosophy at Harvard University. His other books include Just Elections: Creating a Fair Electoral Process in the U.S. (Chicago).

"This is a great collection by two leading thinkers that will certainly add to the current debate on deliberative democracy. Though the literature on the subject has grown in the last few years, many important issues remain to be addressed. Gutmann and Thompson's book addresses these issues."—Leonardo Avritzer, Universidade Federal de Minas Gerais, Brazil, author of Democracy and Public Space in Latin America

"This book lays out, defends, and applies Amy Gutmann and Dennis Thompson's theory of deliberative democracy. Accessible and yet rigorous, each chapter starts from and articulates the authors' view of the subject while taking that view to new places. Concrete illustrations play a major part in all the theoretical discussions, and not only do they make the philosophical arguments clear but they also point to practical application of the theory. There is a huge political rhetoric about deliberation and citizen engagement outside academia, and this book can inform that public debate."—Simone Chambers, University of Toronto, author of Reasonable Democracy