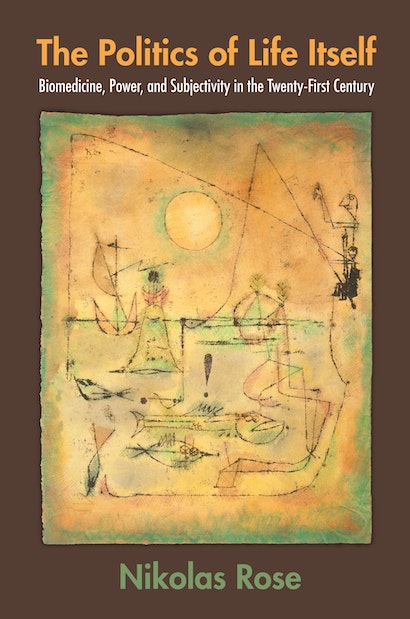 For centuries, medicine aimed to treat abnormalities. But today normality itself is open to medical modification. Equipped with a new molecular understanding of bodies and minds, and new techniques for manipulating basic life processes at the level of molecules, cells, and genes, medicine now seeks to manage human vital processes. The Politics of Life Itself offers a much-needed examination of recent developments in the life sciences and biomedicine that have led to the widespread politicization of medicine, human life, and biotechnology.


Avoiding the hype of popular science and the pessimism of most social science, Nikolas Rose analyzes contemporary molecular biopolitics, examining developments in genomics, neuroscience, pharmacology, and psychopharmacology and the ways they have affected racial politics, crime control, and psychiatry. Rose analyzes the transformation of biomedicine from the practice of healing to the government of life; the new emphasis on treating disease susceptibilities rather than disease; the shift in our understanding of the patient; the emergence of new forms of medical activism; the rise of biocapital; and the mutations in biopower. He concludes that these developments have profound consequences for who we think we are, and who we want to be.

Nikolas Rose is James Martin White Professor of Sociology and Director of the BIOS Centre for the Study of Bioscience, Biomedicine, Biotechnology and Society at the London School of Economics and Political Science. His books include The Psychological Complex, Governing the Soul, Inventing Our Selves, and Powers of Freedom: Reframing Political Thought.

"This book offers a much-needed examination of recent developments that have led to the widespread politicization of medicine, human life, and biotechnology. . . . Nikolas Rose concludes that these developments have profound consequences for who we think we are, and who we want to be."—LSE News and Views

"From tattoos to organ transplants, cosmetic surgery to circumcision, obsessive dieting to exercise, the practice of manipulating bodies is increasingly widespread. But have we passed into a new phase of manipulation evidenced by the prevalent use of medicine to adjust our moods, enhance sports performance, slow ageing or alter fetuses? Nikolas Rose . . . argues that a threshold has been crossed into a world of 'biological citizenship' in which humans view themselves at the molecular level, medicine is based on customization, and biology poses fewer and fewer limits on life. For Rose, however, this is not always a bad thing."—Jessica Lovaas, Journal of Biosocial Science

"There is much to admire in his account of the forms that such a politics is taking, and I would encourage the reader to engage with this work."—Simon Reid-Henry, Cultural Geographies

"Rose's great strength lies in drawing together disparate strands from a variety of sources—from the empirical work of colleagues to policy documents—and neatly labelling and organizing emergent tendencies to invite further reflection, often with a nod (or more) to recent French social theory."—Steve Fuller, Sociology

"While philosophers are still trying to bridge the 'mind/body' gap, Nikolas Rose shows that this gap is evaporating under our very eyes. Are we posthumans then? Not necessarily. This long and detailed inquiry considers another, rather incredible, option: a complete rethinking of what the Fathers of the Church used to call 'incarnation.'"—Bruno Latour, Centre de Sociologie de l'Innovation, Ecole Nationale Supérieure des Mines, Paris

"The Politics of Life Itself offers a compelling cartography of how practices in human genomics are transforming our social landscapes, reshaping the contours of medicine, citizenship, race, and other political formations. It is sure to be widely consulted and discussed."—Stefan Helmreich, Massachusetts Institute of Technology, author of Silicon Second Nature: Culturing Artificial Life in a Digital World

"As a leading interpreter of Foucault's work, Rose is uniquely suited to make the theorist's ideas about biopower applicable to the twenty-first century where possible, and brave enough to reject or refine them when necessary. The result is a deft treatment of the many changes in conceptions of personhood, community, and kinship following the decoding of the human genome."—Alondra Nelson, Yale University