Five extraordinary papers by Albert Einstein that transformed physics, edited and introduced by John Stachel and with a foreword by Nobel laureate Roger Penrose 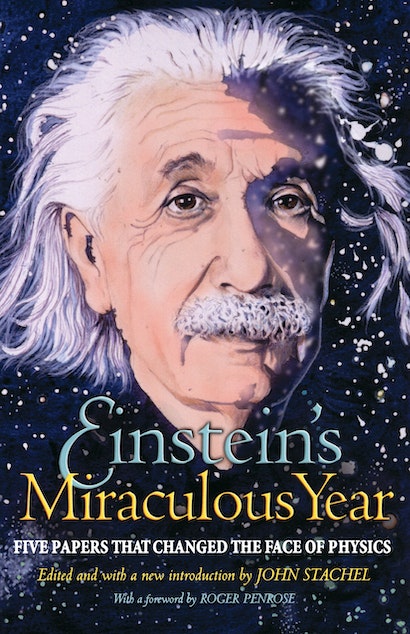 After 1905, Einstein’s miraculous year, physics would never be the same again. In those twelve months, Einstein shattered many cherished scientific beliefs with five extraordinary papers that would establish him as the world’s leading physicist. This book brings those papers together in an accessible format. The best-known papers are the two that founded special relativity: On the Electrodynamics of Moving Bodies and Does the Inertia of a Body Depend on Its Energy Content? In the former, Einstein showed that absolute time had to be replaced by a new absolute: the speed of light. In the second, he asserted the equivalence of mass and energy, which would lead to the famous formula E = mc2
.
The book also includes On a Heuristic Point of View Concerning the Production and Transformation of Light, in which Einstein challenged the wave theory of light, suggesting that light could also be regarded as a collection of particles. This helped to open the door to a whole new world—that of quantum physics. For ideas in this paper, he won the Nobel Prize in 1921.

The fourth paper also led to a Nobel Prize, although for another scientist, Jean Perrin. On the Movement of Small Particles Suspended in Stationary Liquids Required by the Molecular-Kinetic Theory of Heat concerns the Brownian motion of such particles. With profound insight, Einstein blended ideas from kinetic theory and classical hydrodynamics to derive an equation for the mean free path of such particles as a function of the time, which Perrin confirmed experimentally. The fifth paper, A New Determination of Molecular Dimensions, was Einstein’s doctoral dissertation, and remains among his most cited articles. It shows how to calculate Avogadro’s number and the size of molecules.

These papers, presented in a modern English translation, are essential reading for any physicist, mathematician, or astrophysicist. Far more than just a collection of scientific articles, this book presents work that is among the high points of human achievement and marks a watershed in the history of science.

Coinciding with the 100th anniversary of the miraculous year, this new paperback edition includes an introduction by John Stachel, which focuses on the personal aspects of Einstein’s youth that facilitated and led up to the miraculous year.

John Stachel is Professor of Physics Emeritus at Boston University, where he directs the Center for Einstein Studies. Roger Penrose is a Nobel Prize–winning physicist and the bestselling author, with Stephen Hawking, of The Nature of Space and Time (Princeton). He is the Rouse Ball Professor of Mathematics Emeritus at the University of Oxford.

"In these excellent new translations of Einstein's papers, the economy and freshness of Einstein's style come through with undiminished force. . . . To re-read these papers is to relive perhaps the most dramatic year in the history of physics."—Werner Israel, Physics World

"Read this beautifully translated and edited collection and enjoy an encounter with one of the greatest minds at work and five of the greatest physics papers of [the twentieth] century."—David C. Cassidy, American Journal of Physics

"I find myself thrilled by these papers. Why? Because through the original choice of words and arguments, through the simple but profound ideas and thought processes . . . I have been able to gaze into the mind of this great scientist in a way that no distillation or restatement or commentary would allow. In these papers one can see an enormously gifted human being grappling with the nature of the world."—Alan Lightman, Atlantic Monthly

"Drawing heavily on his subject's autobiographical reflections about the relationship between thought and language in his struggles to understand deep physical problems, Stachel paints a not-unfamiliar picture of Einstein as a solitary genius whose driving ideas were entirely his own."—David E. Rowe, Times Higher Education Supplement

"Einstein's Miraculous Year provides a well-considered look back at the seminal ideas that eventually helped make Einstein a household name. . . . [I]t's never too late to take a closer look at the century-old work that revolutionized [physics]."—Ryan Wyatt, Planetarian

"It is particularly remarkable that a single physicist—Albert Einstein—has such extraordinarily deep perceptions of the workings of Nature that he laid foundation stones of . . .[the] twentieth-century revolutions [in physics] in the single year of 1905."—From the foreword by Roger Penrose, Rouse Ball Professor of Mathematics at the University of Oxford