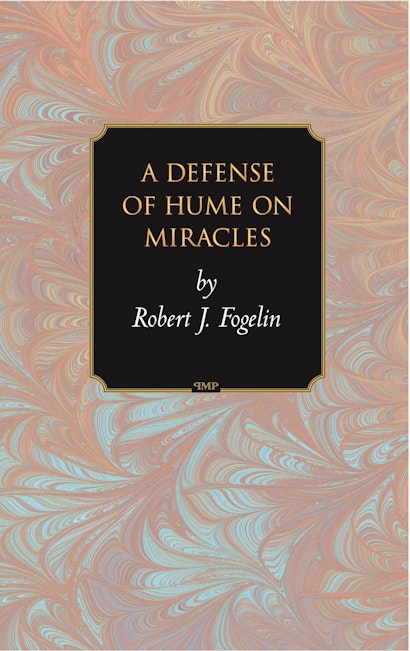 Since its publication in the mid-eighteenth century, Hume’s discussion of miracles has been the target of severe and often ill-tempered attacks. In this book, one of our leading historians of philosophy offers a systematic response to these attacks.


Arguing that these criticisms have — from the very start — rested on misreadings, Robert Fogelin begins by providing a narrative of the way Hume’s argument actually unfolds. What Hume’s critics (and even some of his defenders) have failed to see is that Hume’s primary argument depends on fixing the appropriate standards of evaluating testimony presented on behalf of a miracle. Given the definition of a miracle, Hume quite reasonably argues that the standards for evaluating such testimony must be extremely high. Hume then argues that, as a matter of fact, no testimony on behalf of a religious miracle has even come close to meeting the appropriate standards for acceptance. Fogelin illustrates that Hume’s critics have consistently misunderstood the structure of this argument — and have saddled Hume with perfectly awful arguments not found in the text. He responds first to some early critics of Hume’s argument and then to two recent critics, David Johnson and John Earman. Fogelin’s goal, however, is not to “bash the bashers,” but rather to show that Hume’s treatment of miracles has a coherence, depth, and power that makes it still the best work on the subject.

Robert J. Fogelin is Emeritus Professor of Philosophy and the Sherman Fairchild Professor in the Humanities at Dartmouth College. His previous books include Wittgenstein, Hume's Skepticism, and Pyrrhonian Reflections on Knowledge and Justification.

"What a joy to read a philosophy book that is graceful, clear, and short. . . . Fogelin writes with the simplicity and immediacy of a distinguished mind. . . . [I]mpressively conceived and executed."—Mark Sainsbury, Times Literary Supplement

"This book provides a subtle reading of Hume; it is both engaging and well argued; and, it makes a useful addition to the recent literature concerning both Hume's argument and testimony in general."—Dan O'Brien, Philosophy in Review

"Fogelin's defense of Hume on miracles is both engaging and illuminating. I recommend it highly to anyone interested in Hume or in the topic of testimonial evidence for miracles."—Don Garrett, New York University

"We are very much in need of Fogelin's response to the recent abuse heaped on Hume's argument. His book is elegant without being imprecise, well argued without being overly complex, and a pleasure to read."—David Owen, University of Arizona