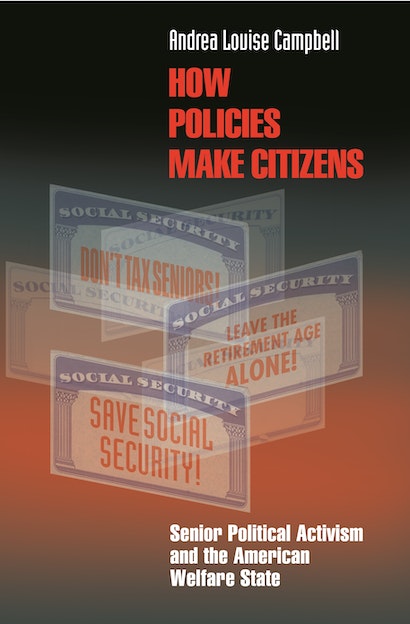 Some groups participate in politics more than others. Why? And does it matter for policy outcomes? In this richly detailed and fluidly written book, Andrea Campbell argues that democratic participation and public policy powerfully reinforce each other. Through a case study of senior citizens in the United States and their political activity around Social Security, she shows how highly participatory groups get their policy preferences fulfilled, and how public policy itself helps create political inequality.


Using a wealth of unique survey and historical data, Campbell shows how the development of Social Security helped transform seniors from the most beleaguered to the most politically active age group. Thus empowered, seniors actively defend their programs from proposed threats, shaping policy outcomes. The participatory effects are strongest for low-income seniors, who are most dependent on Social Security. The program thus reduces political inequality within the senior population — a laudable effect — while increasing inequality between seniors and younger citizens.


A brief look across policies shows that program effects are not always positive. Welfare recipients are even less participatory than their modest socioeconomic backgrounds would imply, because of the demeaning and disenfranchising process of proving eligibility. Campbell concludes that program design profoundly shapes the nature of democratic citizenship. And proposed policies — such as Social Security privatization — must be evaluated for both their economic and political effects, because the very quality of democratic government is influenced by the kinds of policies it chooses.

Andrea Louise Campbell is Assistant Professor of Government at Harvard University. She was a Robert Wood Johnson Scholar in Health Policy at Yale University from 2001-2003.

"This is a persuasively argued, well-researched, and nicely written work that makes a key contribution to our understanding of the politics of Social Security retirement insurance. Because of the singular importance of Social Security as a domestic federal program, . . . Campbell's study fills a significant gap."—Gary Mucciaroni, Perspectives on Politics

"Many political scientists share a hunch that Big Government has a large influence on civic engagement, but there are precious few studies that offer convincing evidence of this impact and even fewer that trace individual-level policy feedback effects over time. In this meticulous yet creative analysis of political mobilization around the Social Security program, Andrea Campbell demonstrates empirically just how powerful a force American government has become in the lives of citizens. In so doing, she advances a compelling framework for future research on the links between public policy and political participation. This excellent book will be read with great interest by scholars of political behavior, the policymaking process, and American political development."—Eric Patashnik, University of Virginia, author of Putting Trust in the U.S. Budget

"Beautifully written and organized, this book makes a very important contribution to our understanding of the linkages between citizen participation and public policy. The writing is clear and jargon-free, the scholarship is sound, the analysis is sophisticated and innovative, and the topic is timely."—Christine L. Day, University of New Orleans, author of What Older Americans Think