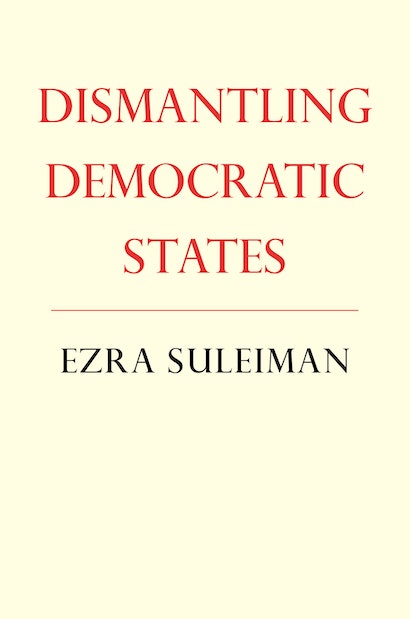 Bureaucracy is a much-maligned feature of contemporary government. And yet the aftermath of September 11 has opened the door to a reassessment of the role of a skilled civil service in the survival and viability of democratic society. Here, Ezra Suleiman offers a timely and powerful corrective to the widespread view that bureaucracy is the source of democracy’s ills. This is a book as much about good governance as it is about bureaucratic organizations. Suleiman asks: Is democratic governance hindered without an effective instrument in the hands of the legitimately elected political leadership? Is a professional bureaucracy required for developing but not for maintaining a democratic state? Why has a reform movement arisen in recent years championing the gradual dismantling of bureaucracy, and what are the consequences?


Suleiman undertakes a comparative analysis of the drive toward a civil service grounded in the New Public Management. He argues that “government reinvention” has limited bureaucracy’s capacity to adequately serve the public good. All bureaucracies have been under political pressure in recent years to reduce not only their size but also their effectiveness, and all have experienced growing deprofessionalism and politicization. He compares the impact of this evolution in both democratic societies and societies struggling to consolidate democratic institutions. Dismantling Democratic States cautions that our failure to acknowledge the role of an effective bureaucracy in building and preserving democratic political systems threatens the survival of democracy itself.

Ezra Suleiman is IBM Professor of International Studies, Professor of Politics, and Director of the European Studies Program at Princeton University. He is the author or coauthor of over ten books in comparative politics.

"In this powerful defense of the modern bureaucratic state, Suleiman argues that decades of attacks on government bureaucracy by Western politicians have undermined their own authority, weakened citizenship, and imperiled democratic governance. . . . Suleiman acknowledges that a leaner, more efficient state may be necessary today, but he makes a compelling case for the continuing necessity of the bureaucratic machine."—Foreign Affairs

"Suleiman demonstrates precisely how legitimacy requires bureaucracy that is effective and how new and old democracies alike require bureaucracies at each stage of development. . . . This is an important work and should be considered by those concerned with the proper functioning of democratic states."—Spencer D. Bakich, Virginia Quarterly Review

"The relentless and prolonged assault by politicians and the public on the competence and motives of their government bureaucracies is slowly but surely undermining democracy in the Americas and Europe. . . . The book arrives during a moment of particularly nasty relations between major parts of Washington's bureaucracy and a conservative Republican president who bemoans having to live and work here. This is a happy accident of timing. The book has no partisan ax to grind, and its insights could be useful to the Bush administration—both at home and in its unexpected bonanza of nation-building projects abroad."—Jim Hoagland, The Washington Post

"This is a first-rate book. In it, Ezra Suleiman, perhaps the academic world's most established expert on the politics of administration, takes on the most influential movement to affect government since the innovation of politically independent bureaucracies: 'New Public Management'. Not only is this book an important contribution to debates on public policy reform, as well as to the literature on democratic transitions, but it has a real political importance that goes beyond the academy. It is essential that the arguments made by Suleiman reach the eyes and ears of those responsible for public policy."—Harvey Feigenbaum, George Washington University, coauthor of Shrinking the State

"This is an important book that is not afraid to address big and important questions. It should be widely read."—Bert A. Rockman, The Ohio State University, coauthor of In the Web of Politics