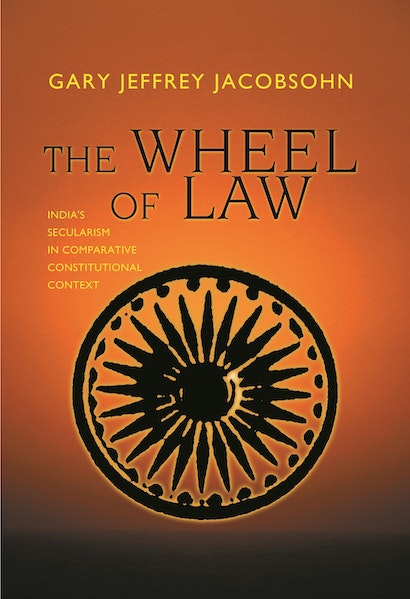 How can religious liberty be guaranteed in societies where religion pervades everyday life? In The Wheel of Law, Gary Jacobsohn addresses this dilemma by examining the constitutional development of secularism in India within an unprecedented cross-national framework that includes Israel and the United States. He argues that a country’s particular constitutional theory and practice must be understood within its social and political context. The experience of India, where religious life is in profound tension with secular democratic commitment, offers a valuable perspective not only on questions of jurisprudence and political theory arising in countries where religion permeates the fabric of society, but also on the broader task of ensuring religious liberty in constitutional polities.


India’s social structure is so entwined with religion, Jacobsohn emphasizes, that meaningful social reform presupposes state intervention in the spiritual domain. Hence India’s “ameliorative” model of secular constitutionalism, designed to ameliorate the disabling effects of the caste system and other religiously based practices. Jacobsohn contrasts this with the “visionary” secularism of Israel, where the state identifies itself with a particular religion, and with America’s “assimilative” secularism.


Constitutional globalization is as much a reality as economic globalization, Jacobsohn concludes, and within this phenomenon the place of religion in liberal democracy is among the most vexing challenges confronting us today. A richly textured account of the Indian experience with secularism, developed in a broad comparative framework, this book is for all those seeking ways to respond to this challenge.

Gary Jeffrey Jacobsohn is Fred Greene Third Century Professor of Jurisprudence and Politics at Williams College. He is the author of Apple of Gold (Princeton), The Supreme Court and the Decline of Constitutional Aspiration, and Pragmatism, Statesmanship, and the Supreme Court.

"An important effort to understand Indian secular constitutionalism in a comparative perspective. Scholars of comparative constitutional law, religion and law, multiculturalism, and Indian law and statecraft will benefit from critically engaging with its contributions."—Narendra Subramanian, Law and Politics Book Review

"The Wheel of Law is a most impressive achievement, thorough in research, astute in insights, and almost dazzling in execution and authorial resourcefulness. Deftly weaving together constitutional history, judicial logic, political development, and philosophical deliberation, this book is not merely a contribution to the discourse; it illuminates, and, in many ways, changes it."—Ahrar Ahmad, Perspectives on Politics

"Consistently interesting, often challenging, and at times brilliant, this book is a fantastically rich intellectual achievement. Jacobsohn's nuanced argument that commitments to secularism must be understood as contextual is original and highly illuminating, as is his elaboration of distinctions between different forms of secularism and between the thickness or thinness of different dominant religions insofar as this relates to the state's official posture about favored religions and religious freedom."—Vicki C. Jackson, Georgetown University Law School

"One of a handful of studies that looks at law as the medium through which the project of secularization is carried out, The Wheel of Law is the first major book-length study of Indian secularism and the law since the sixties. Careful, meticulous, admirably unbullying, and impressive in its range of reference, it is also the only comparative study of constitutionalism in India, the United States, and Israel."—Pratap Bhanu Mehta, Jawaharlal Nehru University