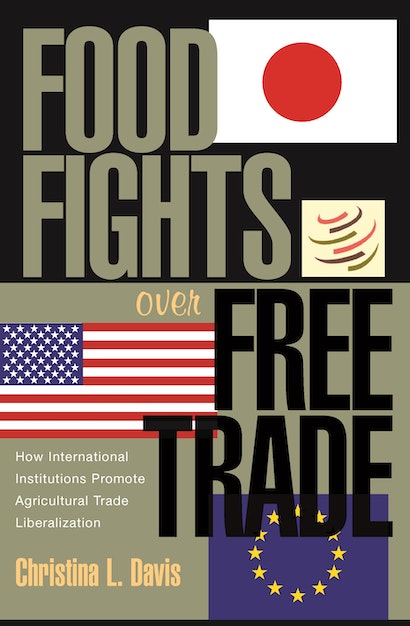 This detailed account of the politics of opening agricultural markets explains how the institutional context of international negotiations alters the balance of interests at the domestic level to favor trade liberalization despite opposition from powerful farm groups. Historically, agriculture stands out as a sector in which countries stubbornly defend domestic programs, and agricultural issues have been the most frequent source of trade disputes in the postwar trading system. While much protection remains, agricultural trade negotiations have resulted in substantial concessions as well as negotiation collapses. Food Fights over Free Trade shows that the liberalization that has occurred has been due to the role of international institutions.


Christina Davis examines the past thirty years of U.S. agricultural trade negotiations with Japan and Europe based on statistical analysis of an original dataset, case studies, and in-depth interviews with over one hundred negotiators and politicians. She shows how the use of issue linkage and international law in the negotiation structure transforms narrow interest group politics into a more broad-based decision process that considers the larger stakes of the negotiation. Even when U.S. threats and the spiraling budget costs of agricultural protection have failed to bring policy change, the agenda, rules, and procedures of trade negotiations have often provided the necessary leverage to open Japanese and European markets.


This book represents a major contribution to understanding the negotiation process, agricultural politics, and the impact of international institutions on domestic politics.

"This impressive book documents two ways in which international institutions sometimes help trade negotiators produce liberalizing outcomes despite entrenched resistance, by tilting politics within their countries against protected interests. Both sides in battles over trade and protection will find practical implications here. Scholars will find hypotheses about how variations in the institutional context change the international negotiation process, supported by an empirical tour de force."—John Odell, University of Southern California, author of Negotiating the World Economy

"This is a major piece of careful scholarship, of value to an important audience extending well beyond political science. Economists, trade specialists, and agriculturalists will immediately notice the empirical detail provided in this work. Davis understands the concerns and can speak the technical language of these practitioners; they will have to take her sophisticated analytic methods and conclusions seriously."—Robert Paarlberg, Wellesley College, author of The Politics of Precaution

"This book has many admirable qualities: the argument is well conceived, the scholarship is of a very high quality, and the conclusions make significant contributions to our understanding of the link between domestic and international politics."—Adam Sheingate, author of The Rise of the Agricultural Welfare State