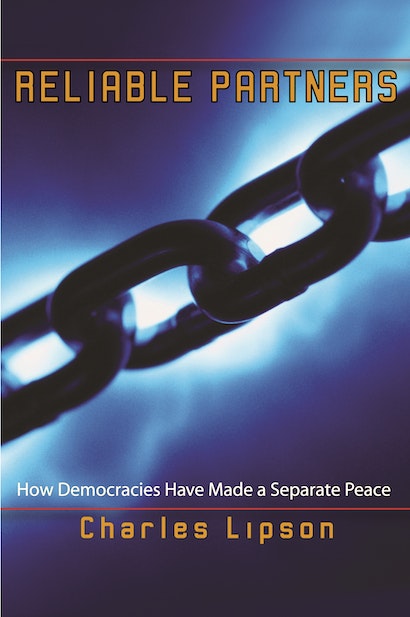 Democracies often go to war but almost never against each other. Indeed, “the democratic peace” has become a catchphrase among scholars and even U.S. Presidents. But why do democracies avoid fighting each other? Reliable Partners offers the first systematic and definitive explanation. Examining decades of research and speculation on the subject and testing this against the history of relations between democracies over the last two centuries, Charles Lipson concludes that constitutional democracies have a “contracting advantage” — a unique ability to settle conflicts with each other by durable agreements. In so doing he forcefully counters realist claims that a regime’s character is irrelevant to war and peace. Lipson argues that because democracies are confident their bargains will stick, they can negotiate effective settlements with each other rather than incur the great costs of war.


Why are democracies more reliable partners? Because their politics are uniquely open to outside scrutiny and facilitate long-term commitments. They cannot easily bluff, deceive, or launch surprise attacks. While this transparency weakens their bargaining position, it also makes their promises more credible — and more durable, for democracies are generally stable. Their leaders are constrained by constitutional rules, independent officials, and the political costs of abandoning public commitments. All this allows for solid bargains between democracies. When democracies contemplate breaking their agreements, their open debate gives partners advance notice and a chance to protect themselves. Hence agreements among democracies are less risky than those with nondemocratic states. Setting rigorous analysis in friendly, vigorous prose, Reliable Partners resolves longstanding questions about the democratic peace and highlights important new findings about democracies in world politics, from rivalries to alliances. Above all, it shows conclusively that democracies are uniquely adapted to seal enduring bargains with each other and thus avoid the blight of war.

Charles Lipson is Professor of Political Science at the University of Chicago, where he founded and codirects PIPES, the Program on International Politics, Economics, and Security. He is the author of Standing Guard: Protecting Foreign Capital in the Nineteenth and Twentieth Centuries.

"[I]mportant and engagingly written. . . . If you want a book that takes theory seriously yet will engage students on fundamental aspects of international politics, this is one on a short shelf."—Bruce Russett, Perspectives on Politics

"For the last quarter-century the question of whether democracies are inherently inclined to conduct peaceful foreign policies has been the most extensively studied and heatedly debated issue in the fields of political science and international relations. With Reliable Partners Charles Lipson has produced the definitive study of the question, which summarizes, synthesizes, and goes beyond everything else written about it."—Michael Mandelbaum, Senior Fellow, The Council on Foreign Relations, author of The Ideas That Conquered the World

"A crucial question for our future is the truth of the claim that democracies are unlikely to fight each other. After a careful examination of alternative explanations, Charles Lipson has produced an intriguing argument about the causation behind this correlation. It is an original and important work."—Joseph S. Nye, Dean, John F. Kennedy School of Government, Harvard University

"Scholars have long debated whether democracies fight each other. Charles Lipson persuasively closes that argument and explains how and why democracies are different. With verve and wit, he gathers a carefully crafted set of propositions like snowballs rolling down a hill until they strike like an avalanche with a fully constructed 'contracting theory.' Democracies avoid war with each other, Lipson demonstrates, because they have a unique capacity to bargain and keep their commitments. Reliable Partners is a lucid and compelling book for the experts and the general reader."—Robert A. Pastor, Vice President and Director of the Center for Democracy and Election Management, American University

"Comprehensive, impressively researched, and a pleasure to read, Reliable Partners is a major contribution and the best single book on the subject. Lipson breaks new ground in answering why the democratic peace exists. His work will become a major reference point for future scholarship in the field."—Robert J. Lieber, Georgetown University, editor of Eagle Rules: Foreign Policy and American Primacy in the Twenty-First Century