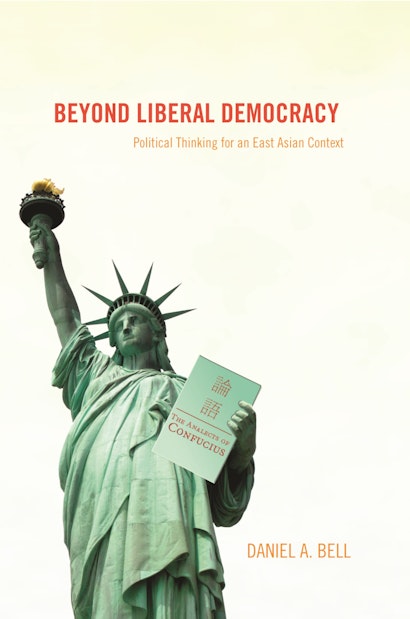 Is liberal democracy appropriate for East Asia? In this provocative book, Daniel Bell argues for morally legitimate alternatives to Western-style liberal democracy in the region. Beyond Liberal Democracy, which continues the author’s influential earlier work, is divided into three parts that correspond to the three main hallmarks of liberal democracy — human rights, democracy, and capitalism. These features have been modified substantially during their transmission to East Asian societies that have been shaped by nonliberal practices and values. Bell points to the dangers of implementing Western-style models and proposes alternative justifications and practices that may be more appropriate for East Asian societies.


If human rights, democracy, and capitalism are to take root and produce beneficial outcomes in East Asia, Bell argues, they must be adjusted to contemporary East Asian political and economic realities and to the values of nonliberal East Asian political traditions such as Confucianism and Legalism. Local knowledge is therefore essential for realistic and morally informed contributions to debates on political reform in the region, as well as for mutual learning and enrichment of political theories.

Beyond Liberal Democracy is indispensable reading for students and scholars of political theory, Asian studies, and human rights, as well as anyone concerned about China’s political and economic future and how Western governments and organizations should engage with China.

Daniel A. Bell is Professor of Political Philosophy and Ethics in the Department of Philosophy at Tsinghua University, Beijing. He is the author of East Meets West: Human Rights and Democracy in East Asia (Princeton) and Communitarianism and Its Critics, and the coeditor of six other books.

"Beyond Liberal Democracy is an intensely personal engagement with the author's experiences of Western liberal political ideas in an Asian context. . . . Mr. Bell . . . is a provocative thinker. He is also refreshingly candid. . . . [T]he result is an important contribution to the debate about liberal democracy in Asia."—David Plott, Far Eastern Economic Review

"This work is a culmination of at least a decade of thinking and writing by a scholar who has observed closely the many intellectually significant issues that have arisen from political development in East Asian societies. . . . [T]he elegant narrative form in which Beyond Liberal Democracy is written makes for an interesting and timely piece of scholarship that should attract a wide readership."—Surain Subramaniam, Contemporary Southeast Asia

"In this engaging, provocative exploration of the intersection between East Asian values and Western liberalism, Bell challenges readers to take seriously the unique contributions of Confucianism and other Eastern traditions to 21st-century political theory and practice. . . . This book is an important contribution to the East-West dialogues of political theorists, activists, and politicians, and sets a high standard for subsequent forays into this field."—Choice

"This book is a lively and insightful contribution to what will be a major debate of the twenty-first century: how profound differences of culture and value will give a different shape to the core institutions of modernity in different civilizations. Drawing on both philosophical analysis and wide empirical knowledge, Daniel Bell examines the continuing importance of Confucianism in East Asia, and its relevance for democracy, human rights, and capitalism. What's more, as a normative theorist, he goes beyond this to argue for the legitimacy of some persistent differences. This engaging and well-written book will provoke much-needed controversy in our overly complacent Western societies."—Charles Taylor, author of Multiculturalism and Sources of the Self

"For over a decade, Daniel Bell has been probing the meaning and feasibility of 'democracy,' 'human rights,' and 'capitalism' in an East Asian setting. Beyond Liberal Democracy pulls many of these strands together in a stimulating, readable, and often humorous fashion. This book is a must for anyone involved with or concerned about China and the other important countries marked by Confucian political-legal culture. It's a friendly, engaging conversation."—Jerome A. Cohen, New York University and the Council on Foreign Relations

"For the past decade or so Daniel Bell has been a leading voice in the international discourse on democracy and human rights in the East Asian context, with his distinctive blend of intellectual inclusiveness, principled realism, and a sure-footed local knowledge that is at once respectful and frankly critical. In this thought-provoking new book, he carries further his culturally sensitive approach to political theorizing, an approach that allows him to move fruitfully between abstract normative reasoning and highly concrete discussion of issues of rights, political participation, and good governance. Those readers who are familiar with Bell's previous work will find here a yet deeper mining of East Asian philosophical resources—especially though not exclusively the Confucian tradition—for normatively attractive proposals that are realistic in and sensitive to contemporary local contexts, as well as an even more wide-ranging engagement with the complex East Asian realities of human rights, democracy, and economic development."—Ci Jiwei, University of Hong Kong

"Daniel Bell is one of the world's very few political theorists with the necessary competence to write on the subject addressed in Beyond Liberal Democracy. His writing style is very stimulating, clear, and accessible; his arguments are carefully constructed, thought-provoking, and original. This book will appeal not only to scholars in political theory and political philosophy, political science, human rights, and Asian studies, but also to general readers."—Joseph Chan, The University of Hong Kong

"Well written, interesting, and sometimes provocative, Beyond Liberal Democracy splendidly complements Bell's earlier work on democracy in an East Asian context. Anyone interested in an 'Asian values' debate would do well to look first to what Bell has to say. This book's reach is even broader, however, since it also offers many new insights into the assumptions of liberal democracy."—Jeff Spinner-Halev, University of North Carolina, Chapel Hill