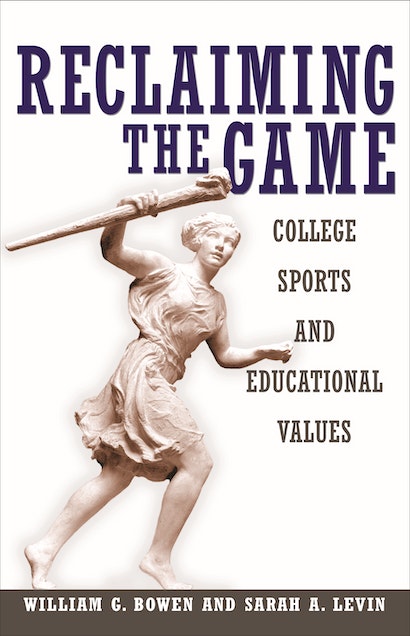 In Reclaiming the Game, William Bowen and Sarah Levin disentangle the admissions and academic experiences of recruited athletes, walk-on athletes, and other students. In a field overwhelmed by reliance on anecdotes, the factual findings are striking — and sobering. Anyone seriously concerned about higher education will find it hard to wish away the evidence that athletic recruitment is problematic even at those schools that do not offer athletic scholarships.


Thanks to an expansion of the College and Beyond database that resulted in the highly influential studies The Shape of the River and The Game of Life, the authors are able to analyze in great detail the backgrounds, academic qualifications, and college outcomes of athletes and their classmates at thirty-three academically selective colleges and universities that do not offer athletic scholarships. They show that recruited athletes at these schools are as much as four times more likely to gain admission than are other applicants with similar academic credentials. The data also demonstrate that the typical recruit is substantially more likely to end up in the bottom third of the college class than is either the typical walk-on or the student who does not play college sports. Even more troubling is the dramatic evidence that recruited athletes “underperform:” they do even less well academically than predicted by their test scores and high school grades.


Over the last four decades, the athletic-academic divide on elite campuses has widened substantially. This book examines the forces that have been driving this process and presents concrete proposals for reform. At its core, Reclaiming the Game is an argument for re-establishing athletics as a means of fulfilling — instead of undermining — the educational missions of our colleges and universities.

William G. Bowen is President of The Andrew W. Mellon Foundation and former President of Princeton University. He is coauthor of The Shape of the River and The Game of Life (both Princeton). A former All-American collegiate athlete, Sarah A. Levin is a doctoral student at the Harvard School of Public Health and a research associate at The Andrew W. Mellon Foundation. She completed her undergraduate work in mathematics at Harvard, where she was an All-American collegiate athlete.

"Reclaiming the Game paints a disappointing picture of the negative influences of college athletics. . . . Bowen and Levin demonstrate repeatedly that recruited athletes get preferential treatment in admissions despite lower SAT scores, underperform academically throughout college, choose easier majors and graduate at a lower percentage. . .. [A]s the athletic-academic gap grows, the need for visionary leadership from college presidents becomes more pressing. Reclaiming the Game provides an excellent blueprint to do exactly what its title suggests."—Mark Luce, Chicago Tribune

"In the comprehensiveness of its research and the solidity of its argument, Reclaiming the Game breaks new ground and probably will become the most influential book in the field for many years. . . . Unlike other proposals for the reform of college sports, Bowen and Levin's do not exist in a vacuum but have been tested in the real world. They actually work."—Murray Sperber, Academe

"Rooted in convincing data, this powerful, thought-provoking work will likely receive wide national attention and will have a substantial impact on campus discussion."—Library Journal

"In Reclaiming the Game, Bill Bowen and Sarah Levin have given us a splendid sequel to The Game of Life. Their admirable analysis of the growing divide between academic values and intercollegiate athletics on our most selective college campuses is meticulous in its documentation, comprehensive in its scope, and troubling in its findings. Bowen and Levin make a compelling case for reform and provide a realistic agenda for achieving it."—Frank H. T. Rhodes, President Emeritus, Cornell University

"Reclaiming the Game is a powerful, thought-provoking book that examines the intersection of intercollegiate athletics with the mission of the institution. Bowen and Levin lay out the challenges facing today's intercollegiate programs and make observations and suggestions to maintain the integrity of athletics within the context of highly selective liberal arts institutions."—Amy Campbell, Director of Athletics and Physical Education, Bryn Mawr College

"Sports play a vibrant part in American college life. The emphasis on them has gotten out of kilter, however, even at the most selective liberal arts colleges. Reclaiming the Game describes a growing gap between intercollegiate athletics and basic academic values. The book is rooted in compelling data. It will be a catalyst for understanding the facts, thinking about how to do better, and actually taking remedial action."—W. Taylor Reveley III, Dean, William & Mary Law School

"Reclaiming the Game is the rare case of a sequel that is even better than a great original. Although some sports enthusiasts will wish this new book could be ignored, it will be hard to dismiss it. Of great practical importance, this book will receive wide national attention and have a substantial impact on campus discussions."—Michael S. McPherson, President, Macalaster College

"This will become a standard reference. It develops fuller and more recent data on the academic performance of varsity athletes than ever before. The book deals especially well with the impact of increasing competition, specialization, and professionalization on coaches."—Michael MacDonald, Williams College