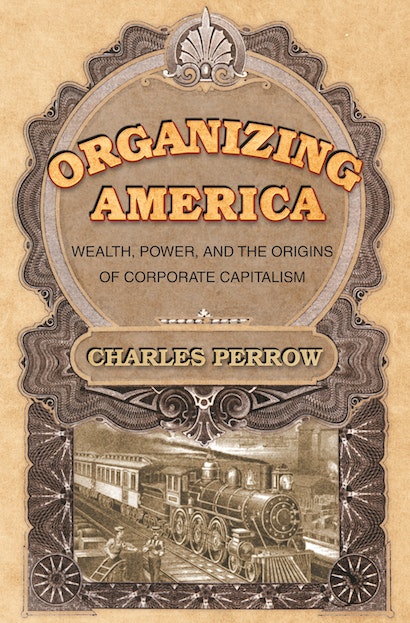 American society today is shaped not nearly as much by vast open spaces as it is by vast, bureaucratic organizations. Over half the working population toils away at enterprises with 500 or more employees — up from zero percent in 1800. Is this institutional immensity the logical outcome of technological forces in an all-efficient market, as some have argued? In this book, the first organizational history of nineteenth-century America, Yale sociologist Charles Perrow says no. He shows that there was nothing inevitable about the surge in corporate size and power by century’s end. Critics railed against the nationalizing of the economy, against corporations’ monopoly powers, political subversion, environmental destruction, and “wage slavery.” How did a nation committed to individual freedom, family firms, public goods, and decentralized power become transformed in one century?


Bountiful resources, a mass market, and the industrial revolution gave entrepreneurs broad scope. In Europe, the state and the church kept private organizations small and required consideration of the public good. In America, the courts and business-steeped legislators removed regulatory constraints over the century, centralizing industry and privatizing the railroads. Despite resistance, the corporate form became the model for the next century. Bureaucratic structure spread to government and the nonprofits. Writing in the tradition of Max Weber, Perrow concludes that the driving force of our history is not technology, politics, or culture, but large, bureaucratic organizations.


Perrow, the author of award-winning books on organizations, employs his witty, trenchant, and graceful style here to maximum effect. Colorful vignettes abound: today’s headlines echo past battles for unchecked organizational freedom; socially responsible alternatives that were tried are explored along with the historical contingencies that sent us down one road rather than another. No other book takes the role of organizations in America’s development as seriously. The resultant insights presage a new historical genre.

Charles Perrow is Research Scholar and Professor Emeritus of Sociology at Yale University. Two of his six books are prizewinners: Normal Accidents (Princeton) and The AIDS Disaster. Complex Organizations (McGraw Hill) is in its third edition. He has written seventy articles and book chapters. Perrow has been a visiting professor at the London Graduate School of Business Studies, a fellow at the Center for Advanced Study in the Behavioral Sciences, and a visiting scholar at the Russell Sage Foundation and the Institute for Advanced Study.

"Organizing America is a provocative and passionate account of the nineteenth century origins of modern American corporate governance and its far-reaching effects. It is highly appropriate for our times."—Michael H. Best, The Journal of Economic History

"An ambitious and important book that is sure to provoke controversy. . . . Organizing America takes on fundamental issues in a way that is provocative, compelling, and all too rare . . . and provides a wealth of insights. . . . [T]his is an important book that will stimulate research and debate for decades to come."—Robert Freeland, Administrative Science Quarterly

"Perrow's book . . . is clearly and cogently expressed, and his refutations of alternative theories are often strong and convincing. This is a useful and stimulating book. . . . The passionate intensity of the author and the lack of obfuscation in his arguments are refreshing."—Gerald Zahavi, American Historical Review

"Organizing America is a magisterial work: a compelling analysis showing why those who study states and economies should take organizations seriously and those studying organizations should ponder how organizations have concentrated wealth and power. Perrow takes the study of organizations back to Weber's original vision, problematizing the question of why and how Western society has been transformed from community and individual to hierarchy and bureaucracy."—William G. Roy, University of California, Los Angeles

"This book represents a long-awaited, sweeping statement by one of the leading organizational theorists of our time. Given the power, force, and even audacity of the author's arguments, it is certain to be much discussed and hotly debated."—Mark S. Mizruchi, University of Michigan

"Charles Perrow sets his sights on those who contend that American firms became behemoths because big firms are more efficient than small ones. Organizing America offers a compelling alternative account, in which managers and owners created huge corporations in the process of striving for power rather than efficiency."—Frank Dobbin, Princeton University