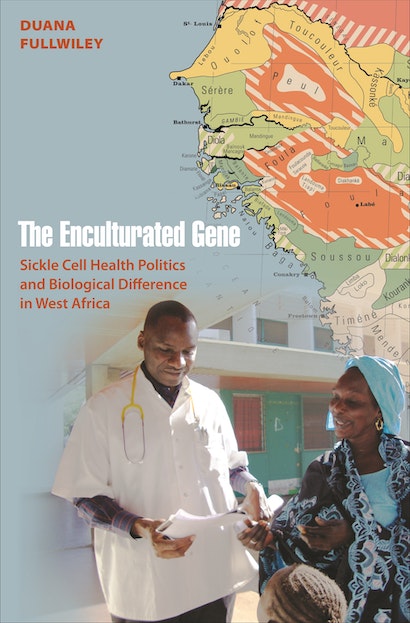 In the 1980s, a research team led by Parisian scientists identified several unique DNA sequences, or haplotypes, linked to sickle cell anemia in African populations. After casual observations of how patients managed this painful blood disorder, the researchers in question postulated that the Senegalese type was less severe. The Enculturated Gene traces how this genetic discourse has blotted from view the roles that Senegalese patients and doctors have played in making sickle cell “mild” in a social setting where public health priorities and economic austerity programs have forced people to improvise informal strategies of care.


Duana Fullwiley shows how geneticists, who were fixated on population differences, never investigated the various modalities of self-care that people developed in this context of biomedical scarcity, and how local doctors, confronted with dire cuts in Senegal’s health sector, wittingly accepted the genetic prognosis of better-than-expected health outcomes. Unlike most genetic determinisms that highlight the absoluteness of disease, DNA haplotypes for sickle cell in Senegal did the opposite. As Fullwiley demonstrates, they allowed the condition to remain officially invisible, never to materialize as a health priority. At the same time, scientists’ attribution of a less severe form of Senegalese sickle cell to isolated DNA sequences closed off other explanations of this population’s measured biological success.

The Enculturated Gene reveals how the notion of an advantageous form of sickle cell in this part of West Africa has defined — and obscured — the nature of this illness in Senegal today.

Duana Fullwiley is associate professor of anthropology at Stanford University.

"Duana Fullwiley has produced an extraordinary work that incorporates the insights of anthropology as well as science and technology studies of genetics and race. It is also exceptional in its multi-sited focus on Senegal and France, since many similar studies of genetics have tended to focus on the US and Europe."—Elisha P. Renne, Anthropological Quarterly

"The Enculturated Gene is the product of over ten years of research beginning in the late 1990s. The book is stunning in its scope and attention to a full range of issues, from discoveries in the lab to knowledge production in the clinic to global health responses. . . . By elucidating ethnographically the contingencies that have produced the local and global health responses to sickle cell disease, Fullwiley shows us that health policy is as much a product of culture and subjectivity as affective responses to physical and existential pain."—Carolyn Rouse, Medical Anthropology Quarterly

"Duana Fullwiley has produced a richly textured ethnography of what it means to study the way medical science approaches a disease across broad cultural landscapes. In so doing, she has built a bridge across C. P. Snow's 'two cultures.'"—Troy Duster, author of Backdoor to Eugenics

"In this meticulously crafted ethnography, Fullwiley exposes the tragic human consequences of a belief in a 'mild form' of sickle cell anemia thought to affect Senegalese. International donors, scientists, and local peoples alike adhere to this belief, fueled by cultural strategies of coping in an environment of shocking medical lack. This first book-length ethnography about genetic disease in Africa, a must-read for social scientists and health care professionals, demonstrates irrevocably how tangled power relations and biogenetic difference inform embodiment and subjectivity."—Margaret Lock, coauthor of An Anthropology of Biomedicine

"An important contribution to the social studies of science and critical medical anthropology, The Enculturated Gene offers an insightful perspective on and a sensitive understanding of the experiences and dilemmas of patients, doctors, and scientists dealing with sickle cell anemia in West Africa."—Didier Fassin, Institute for Advanced Study in Princeton

"Based on extensive ethnographic fieldwork, The Enculturated Gene admirably demonstrates how sickle cell disease forms new associations in and between the domains of biomedicine, biopolitics, and the everyday lives of sufferers. Fullwiley demonstrates that universalistic, biomedical concepts of disease have only limited value in understanding embodied, situated disease."—Stefan Beck, Humboldt University of Berlin