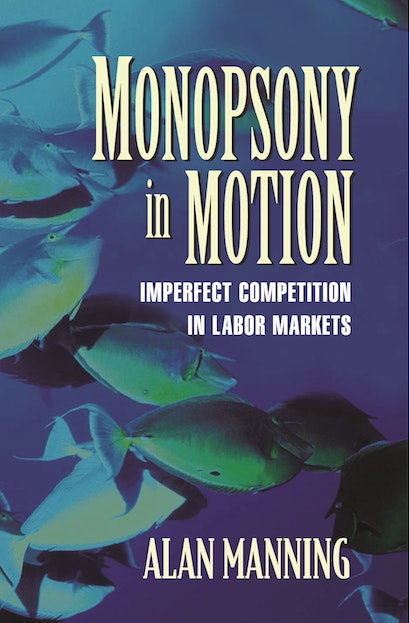 What happens if an employer cuts wages by one cent? Much of labor economics is built on the assumption that all the workers will quit immediately. Here, Alan Manning mounts a systematic challenge to the standard model of perfect competition. Monopsony in Motion stands apart by analyzing labor markets from the real-world perspective that employers have significant market (or monopsony) power over their workers. Arguing that this power derives from frictions in the labor market that make it time-consuming and costly for workers to change jobs, Manning re-examines much of labor economics based on this alternative and equally plausible assumption.


The book addresses the theoretical implications of monopsony and presents a wealth of empirical evidence. Our understanding of the distribution of wages, unemployment, and human capital can all be improved by recognizing that employers have some monopsony power over their workers. Also considered are policy issues including the minimum wage, equal pay legislation, and caps on working hours. In a monopsonistic labor market, concludes Manning, the “free” market can no longer be sustained as an ideal and labor economists need to be more open-minded in their evaluation of labor market policies. Monopsony in Motion will represent for some a new fundamental text in the advanced study of labor economics, and for others, an invaluable alternative perspective that henceforth must be taken into account in any serious consideration of the subject.

Alan Manning is Professor of Economics and Director of the Labour Markets Programme in the Centre for Economic Performance at the London School of Economics. He has published numerous papers on labor economics.

"Given the breadth and depth of the issues Manning covers—clearly, a staggering amount of work went into this book—even skeptical readers will not be able to dismiss his theory lightly. . . . The book is so well written that even the most complicated material in it is readable. The presentation is also commendably well balanced. . . . [It] deserves a place on our bookshelves alongside the other seminal works in labor economics."—Michael Rizzo, Industrial and Labor Relations Review

"The manner of Manning's exposition of his arguments advocating the monopsonist view is impressive. . . . [I]t will be hard for even the utmost skeptic and expert not to come away having learnt something more about labor economics."—Eric A. Strobl, Journal of Economic Behavior and Organization

"This is a fine book, revealing a breadth of scholarship and vision. It pulls many threads together in labour economics to offer a thought-provoking re-evaluation of how labour economists approach many topics, including market power, wage distributions and wage equations, and the economics of education and training. As such it should appear on the syllabi of graduate labour economics programmes."—Richard Disney, Nottingham University

"The best way to appreciate the value of this book is to go to its first table. There, the author provides an overview of what textbooks in labor economics have to say about monopsony and imperfect competition—not all that much. In that light, Alan Manning's book fills a real gap in the discipline. The book shows that the monopsony model provides a simple alternative explanation for a number of well-known stylized facts of labor markets."—Coen N. Teulings, General Director, Tinbergen Institute, Amsterdam

"[This book] is bound to propel the idea that labor markets are imperfectly competitive into a new orbit. Students and scholars will benefit from Alan Manning's clear presentation and dispassionate analysis for years to come."—Alan Krueger, Princeton University

"This book pushes a conservative field as hard as possible to adopt a more open attitude toward imperfect competition in the labor market. By leading creative younger scholars to think 'outside the box', it could well become a classic. Carefully organized and well written, it includes an impressive amount of new empirical material on many different aspects of the labor market. Manning has devoted considerable thought to the question of what imperfect competition means for real-world behavior."—David Card, University of California, Berkeley, coauthor of Myth and Measurement

"This is a splendid book. The careful mix of theoretical background and new ways to interpret the empirical evidence provides a unique treatment of the working of the labour market that departs from most other textbooks guided by the competitive paradigm."—Juan J. Dolado, Universidad Carlos III de Madrid, Co-Director of the CEPR Labour Economics Programme