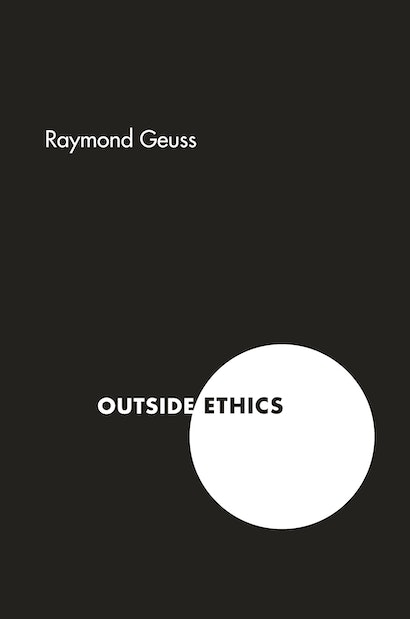 Outside Ethics brings together some of the most important and provocative works by one of the most creative philosophers writing today. Seeking to expand the scope of contemporary moral and political philosophy, Raymond Geuss here presents essays bound by a shared skepticism about a particular way of thinking about what is important in human life — a way of thinking that, in his view, is characteristic of contemporary Western societies and isolates three broad categories of things as important: subjective individual preferences, knowledge, and restrictions on actions that affect other people (restrictions often construed as ahistorical laws). He sets these categories in a wider context and explores various human phenomena — including poetry, art, religion, and certain kinds of history and social criticism — that do not fit easily into these categories. As its title suggests, this book seeks a place outside conventional ethics.


Following a brief introduction, Geuss sets out his main concerns with a focus on ethics and politics. He then expands these themes by discussing freedom, virtue, the good life, and happiness. Next he examines Theodor Adorno’s views on the relation between suffering and knowledge, the nature of religion, and the role of history in giving us critical distances from existing identities. From here he moves to aesthetic concerns. The volume closes by looking at what it is for a human life to have “gaps” — to be incomplete, radically unsatisfactory, or a failure.

Raymond Geuss is Reader in Philosophy at the University of Cambridge. He is the author of Public Goods, Private Goods (Princeton), The Idea of Critical Theory, and History and Illusion in Politics.

"No one among contemporary moral and political philosophers writes better essays than Raymond Geuss. His prose is crisp, elegant, and lucid. His arguments are to the point. And, by inviting us to reconsider what we have hitherto taken for granted, he puts in question not just this or that particular philosophical thesis, but some of the larger projects in which we are engaged. Often enough Geuss does this with remarkable economy, provoking us into first making his questions our own and then discovering how difficult it is to answer them."—Alasdair MacIntyre, Notre Dame Philosophical Reviews

"Absorbing. . . . Fourteen essays of uncommon interest. . . . [They] exhibit a striking combination of careful analysis and utter iconoclasm. . . . Despite Geuss's justified claim to be on the outside looking in, he would be a wonderful guide for all those on the inside who want to come out."—George Warnke, Ethics

"Raymond Geuss is a major voice in contemporary philosophy, and this book will enhance his stature even further. Containing some of his best pieces so far, Outside Ethics reveals his impressive range as well as the depth of his thought. I came away truly impressed. As a philosophical essayist, Geuss has achieved the height of his art."—Hans Sluga, University of California, Berkeley, author of Heidegger's Crisis: Philosophy and Politics in Nazi Germany

"All the essays in this book are important, interesting, and provocative, and readers will appreciate having access to them between one set of covers. The pieces on freedom alone would justify a collection; so would the thoughtful ruminations on happiness."—Robert Pippin, University of Chicago, author of Henry James and Modern Moral Life