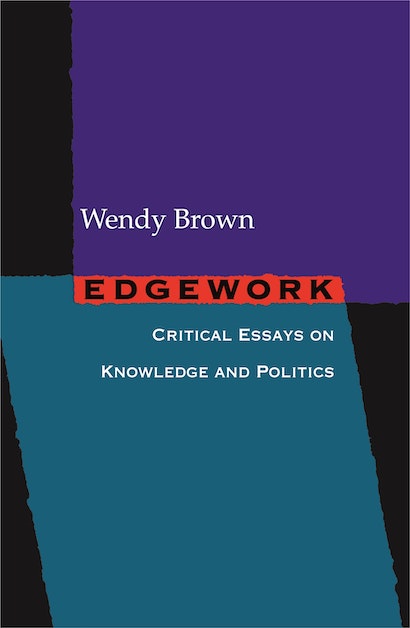 Edgework brings together seven of Wendy Brown’s most provocative recent essays in political and cultural theory. They range from explorations of politics post-9/11 to critical reflections on the academic norms governing feminist studies and political theory. Edgework is also concerned with the intellectual and political value of critique itself. It renders contemporary the ancient jurisprudential meaning of critique as krisis, in which a tear in the fabric of justice becomes the occasion of a public sifting or thoughtfulness, the development of criteria for judgment, and the inauguration of political renewal or restoration. Each essay probes a contemporary problem — the charge of being unpatriotic for dissenting from U.S. foreign policy, the erosion of liberal democracy by neoliberal political rationality, feminism’s loss of a revolutionary horizon — and seeks to grasp the intellectual impasse the problem signals as well as the political incitement it may harbor.

Wendy Brown is Professor of Political Science at the University of California, Berkeley. She is the author of Politics Out of History and States of Injury: Power and Freedom in Late Modernity (both Princeton).

"Attentive to the paradoxes and fragilities of contemporary democratic life, Wendy Brown's Edgework traverses democratic and feminist theory to deepen our appreciation of love in a time of hostility, equality in a time of difference, and action in a time of felt paralysis. Timely yet not simply 'relevant,' Edgework manifests throughout that quality that Hannah Arendt admired and named 'care for the world.'"—Bonnie Honig, Professor of Political Science, Northwestern University; Senior Research Fellow, American Bar Foundation; author of Democracy and the Foreigner

"There is no one who occupies the place Brown occupies, who thinks as she thinks, or who writes with the same startling combination of bravery and moderation. There is no one who has such an acute eye for the structural perversities of American politics. There is no one who can so easily break the surface of political controversies and local scholarly debates, and dive into the profound questions below and behind them."—Anne Norton, University of Pennsylvania, author of Leo Strauss and the Politics of American Empireand 95 Theses on Politics, Culture, and Method