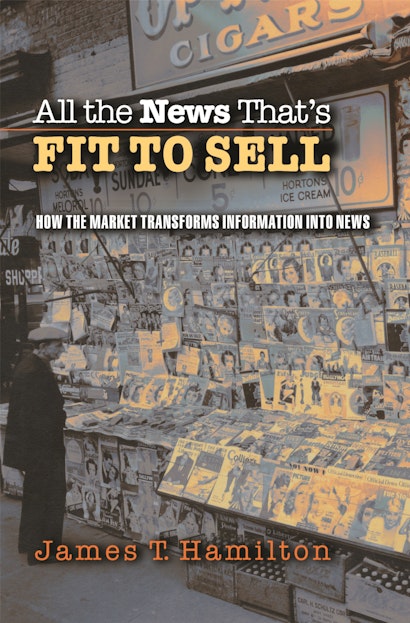 That market forces drive the news is not news. Whether a story appears in print, on television, or on the Internet depends on who is interested, its value to advertisers, the costs of assembling the details, and competitors’ products. But in All the News That’s Fit to Sell, economist James Hamilton shows just how this happens. Furthermore, many complaints about journalism — media bias, soft news, and pundits as celebrities — arise from the impact of this economic logic on news judgments.


This is the first book to develop an economic theory of news, analyze evidence across a wide range of media markets on how incentives affect news content, and offer policy conclusions. Media bias, for instance, was long a staple of the news. Hamilton’s analysis of newspapers from 1870 to 1900 reveals how nonpartisan reporting became the norm. A hundred years later, some partisan elements reemerged as, for example, evening news broadcasts tried to retain young female viewers with stories aimed at their (Democratic) political interests. Examination of story selection on the network evening news programs from 1969 to 1998 shows how cable competition, deregulation, and ownership changes encouraged a shift from hard news about politics toward more soft news about entertainers.


Hamilton concludes by calling for lower costs of access to government information, a greater role for nonprofits in funding journalism, the development of norms that stress hard news reporting, and the defining of digital and Internet property rights to encourage the flow of news. Ultimately, this book shows that by more fully understanding the economics behind the news, we will be better positioned to ensure that the news serves the public good.

James T. Hamilton is Charles S. Sydnor Professor of Public Policy, Economics, and Political Science at Duke University. He has written or coauthored six books, including Regulation through Revelation and Channeling Violence (Princeton), which won the Shorenstein Center's Goldsmith Book Prize. He is also a recipient of the David N. Kershaw award for distinguished public policy research.

"More than ever before, Mr. Hamilton argues, hard news is not what fattens the newsstands or fills the airwaves. Instead we have celebrity profiles, product hype or what we used to call human-interest stories. . . . Mr. Hamilton slices and dices cyberhit sums to show that the Internet marketplace is a lot like the older one. . . . The title tarts up what is essentially an academic analysis of changes in the media marketplace. But there is nothing wrong with that: Selling is, after all, what purveyors of information do, and Mr. Hamilton has something to purvey."—Tim W. Ferguson, The Wall Street Journal

"As Hamilton shows, news is now presented to specific audiences, depending on marketing decisions, with a resultant shift from political news to softer topics such as entertainment. He recommends ways to counteract this situation and increase the amount of hard news available to the consumer."—Library Journal

"Using a variety of surveys and statistical charts of who watches what and how the news menu has been altered, Hamilton doesn't just assert the change; he proves it. . . . [He] does not demonize news/marketing executives. He demonstrates that younger audiences prefer sports to international news, health and lifestyle to government news, more conflict and less exposition. The bottom line is that news brims with conflict and the adversarial pose that substitutes for hard information."—Ken Auletta, Los Angeles Times Book Review

"Hamilton takes the analysis of news stories back to basics, reminding us that information is transformed into news—that most ephemeral and fragile of commodities—when there is an identifiable market for it and when it seems likely to yield a profit. In so doing, he opens up abundant possibilities for parallel studies and for a radical re-interpretation of the history of journalism."—Dilwyn Porter, Business History

"At what price do we get our news? The role of economics in defining the nature of contemporary journalism has never been better explained. A valuable, important book for those of us who watch, read, or listen to the news."—Marvin Kalb, Senior Fellow, Joan Shorenstein Center on the Press, Politics and Public Policy

"Forget everything you thought you knew about the news media. Jay Hamilton's lively, sophisticated analysis shows how powerful economic forces determine what we read and see on the news every day. The ills of media bias, celebrity journalism, and fluff coverage are just pieces of a much larger puzzle that Hamilton creatively assembles for us. Once you read this brilliant book, you'll finally understand what must be done to change and improve the news media."—Larry J. Sabato, Director, University of Virginia Center for Politics

"This is by far the best book in a new and growing field—economics of the media, one of the most important and neglected parts of economics. James Hamilton, the leading authority in the area, has produced a seminal analysis."—Tyler Cowen, author of Creative Destruction

"This is a superior piece of work. No other book does as good a job of analyzing economic factors shaping the news. One of the very few economists seriously examining the media, James Hamilton not only offers the single best analysis I have ever seen of the economic reasons objectivity became the hallmark of professional journalism, but has also done a superb job of looking at the economic factors shaping television news."—John Maxwell Hamilton, Marketplace Commentator and Dean, Manship School of Mass Communication, Louisiana State University