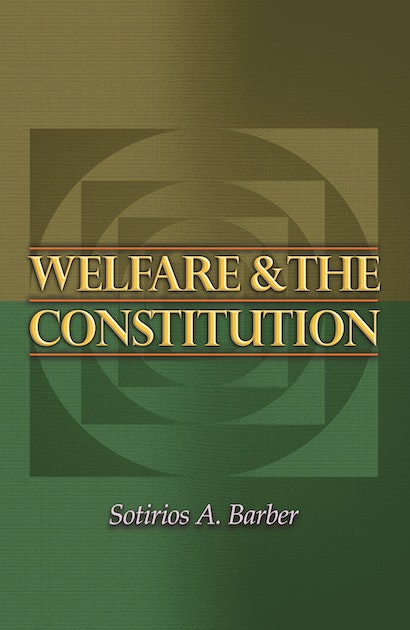 Welfare and the Constitution defends a largely forgotten understanding of the U.S. Constitution: the positive or “welfarist” view of Abraham Lincoln and the Federalist Papers. Sotirios Barber challenges conventional scholarship by arguing that the government has a constitutional duty to pursue the well-being of all the people. He shows that James Madison was right in saying that the “real welfare” of the people must be the “supreme object” of constitutional government. With conceptual rigor set in fluid prose, Barber opposes the shared view of America’s Right and Left: that the federal constitutional duties of public officials are limited to respecting negative liberties and maintaining processes of democratic choice.


Barber contends that no historical, scientific, moral, or metaethical argument can favor today’s negative constitutionalism over Madison’s positive understanding. He urges scholars to develop a substantive account of constitutional ends for use in critiquing Supreme Court decisions, the policies of elected officials, and the attitudes of the larger public. He defends the philosophical possibility of such theories while also offering a theory of his own as a starting point for the discussion the book will provoke. This theory holds, for example, that voucher schemes which drain resources from secular public schools to schools that would train citizens to submit to religious authority are unconstitutional; First Amendment issues aside, such schemes defeat what is undeniably an element of the “real welfare” of the people, individually and collectively: the capacity to think critically for oneself.

Sotirios A. Barber is Professor of Political Science at the University of Notre Dame. He is the author of On What the Constitution Means and The Constitution of Judicial Power, and coeditor of Constitutional Politics (Princeton).

"In this bold book, the case for a 'welfarist' constitution is made carefully and rigorously. Going back to Madison and The Federalist Papers, as well as reinterpreting canonical cases, Barber describes a way of interpreting the US Constitution that departs significantly from the prevailing view. He provides a plethora of sources and rich documentation. . . . [T]his book will provoke much debate among legal scholars."—Choice

"[A] model of the way one might expect constitutional theory to be done."—Ken I. Kersch, Political Science Quarterly

"Barber elegantly (and convincingly) demonstrates that, once negative constitutionalists impose on government a duty to advance the public welfare by punishing theft and fraud and by enforcing contracts, they concede that there is a constitutional duty to help the less fortunate. Issues of how to do so then become issues of practical judgment and political prudence."—Walter F. Murphy, McCormick Professor of Jurisprudence, Emeritus, Princeton University

"Contrary to the negative-rights vision of the Constitution that pervades the thinking of liberal and conservative constitutional theory, this superb book demonstrates that the general welfare is a primary obligation of government under the Constitution."—Ronald Kahn, James Monroe Professor of Politics, Oberlin College

"In this brilliant book Sotirios Barber follows The Federalist, arguing for a broad and robust understanding of what it means to promote the general welfare."—Jeffrey K. Tulis, University of Texas, Austin

"This book is extraordinarily important. It is the most ambitious and realized work of constitutional theory that argues for a positive benefits model of the Constitution. It is also exceptionally well written. The prose is forceful, engaging, and eloquent; the tone is serious and commanding, though disarmingly conversational and accessible. Barber's arguments are at once boldly unconventional and yet derived from traditional sources like Lincoln and The Federalist Papers."—James E. Fleming, Fordham University School of Law

"Welfare and the Constitution engages in extensive, subtle, and sophisticated inquiry into the obligations that the federal Constitution imposes on government."—Lee Anne Fennell, University of Texas School of Law