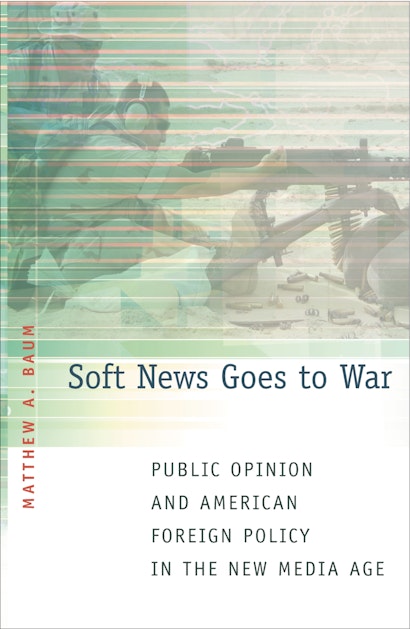 The American public has consistently declared itself less concerned with foreign affairs in the post-Cold War era, even after 9/11, than at any time since World War II. How can it be, then, that public attentiveness to U.S. foreign policy crises has increased? This book represents the first systematic attempt to explain this apparent paradox. Matthew Baum argues that the answer lies in changes to television’s presentation of political information. In so doing he develops a compelling “byproduct” theory of information consumption. The information revolution has fundamentally changed the way the mass media, especially television, covers foreign policy. Traditional news has been repackaged into numerous entertainment-oriented news programs and talk shows. By transforming political issues involving scandal or violence (especially attacks against America) into entertainment, the “soft news” media have actually captured more viewers who will now follow news about foreign crises, due to its entertainment value, even if they remain uninterested in foreign policy.

Matthew A. Baum is Assistant Professor of Political Science and Communications at the University of California, Los Angeles.

"Baum marshals an impressive body of research data to support his thesis, and he arranges it in a highly readable manner."—Choice

"Soft News Goes to War is an important work. Prior to its publication, many researchers had speculated about the political consequences of soft news, but none had provided the rigorously derived conclusions that Baum does. . . . [Readers] will find intriguing and provocative insights to reward them."—Paul R. Brewer, Perspectives on Political Science

"[O]ne of the better political communication books of recent years. . . . [T]his book will open the eyes of scholars and practitioners alike to the new world of public communication. Soft News Goes to War is a must read for those interested in the media, public opinion, and foreign policy."—Thomas E. Patterson, Political Science Quarterly

"Baum's study of 'soft news' is comprehensive. . . . It is rare to see a combination of use-, content-, and effects-based research in a single work, and the author should be applauded for such efforts."—R. Lance Holbert, Public Opinion Quarterly

"Baum presents a detailed theoretical model that serves as a foundation for his study of soft news. It is important that future research in this area use Baum's model as a foundation from which to bring greater sophistication (relative to greater complexity) in outlining the processes that generate soft news effects."—R. Lance Holbert, Public Opinion Quarterly

"Baum sets us off on some productive paths for more research in the area. The book is well written, cautious, and generally impressive. I recommend it highly for all students of contemporary political communication and public opinion."—Susan Herbst, Political Communication

"This important book fills a void by focusing on political content in soft news, which most political communication scholars tend to ignore. Its empirically based findings combine content analyses and audience research, and it contributes to knowledge about the major changes in the media and politics."—Doris Graber, University of Illinois, Chicago, author of Processing Politics

"Baum's argument that the least politically engaged members of the public are increasingly informed about foreign policy crises represents an original and interesting contribution to a topic that is of policy as well as academic interest. Soft News Goes to War looks at the role of the 'soft media' while existing texts do not, deals with a section of the public that is usually overlooked, presents useful and illuminating hypotheses that build upon and engage with existing theories, and challenges the conventional wisdom of an unchanging relationship between the media and the public."—Rhiannon Vickers, University of Sheffield, author of Manipulating Hegemony