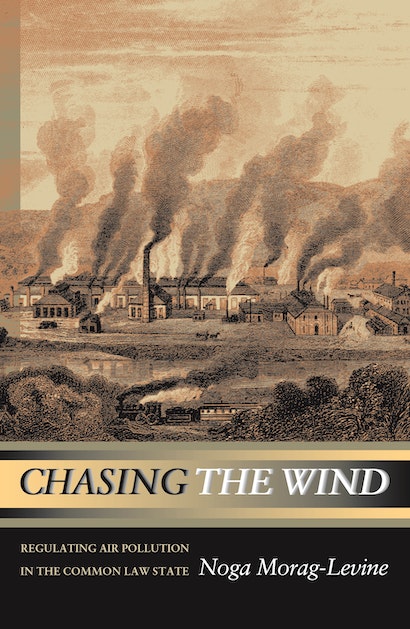 The Federal Clean Air Act of 1970 is widely seen as a revolutionary legal response to the failures of the earlier common law regime, which had governed air pollution in the United States for more than a century. Noga Morag-Levine challenges this view, highlighting striking continuities between the assumptions governing current air pollution regulation in the United States and the principles that had guided the earlier nuisance regime. Most importantly, this continuity is evident in the centrality of risk-based standards within contemporary American air pollution regulatory policy. Under the European approach, by contrast, the feasibility-based technology standard is the regulatory instrument of choice.


Through historical analysis of the evolution of Anglo-American air pollution law and contemporary case studies of localized pollution disputes, Chasing the Wind argues for an overhaul in U.S. air pollution policy. This reform, following the European model, would forgo the unrealizable promise of complete, perfectly tailored protection — a hallmark of both nuisance law and the Clean Air Act — in favor of incremental, across-the-board pollution reductions. The author argues that prevailing critiques of technology standards as inefficient and undemocratic instruments of “command and control” fit with a longstanding pattern of American suspicion of civil law modeled interventions. This distrust, she concludes, has impeded the development of environmental regulation that would be less adversarial in process and more equitable in outcome.

"In this impressive review of the history of air pollution control law, Noga Morag-Levine traces the roots of current tensions between common law and precautionary approaches to regulation.... Chasing the Wind combines a remarkable blend of legal history, comparative law, and political theory that is presented with unfailing clarity and balance. . . . [A] major work of scholarship that should be essential reading for anyone seeking to understand this complex field."—Robert V. Percival, Law and Politics Book Review

"The author carefully uses several centuries of legal cases and a sharp sense of comparison between U.S. and European regulatory and control regimes to provide the reader with a broad canvas of air pollution control history and to expose the weaknesses of different approaches. . . . This book is recommended for anyone concerned with regulatory policy and will help to give a broader and more historical perspective to today's decision makers."—Christopher Hansen, Journal of Energy Literature

"This work is highly recommended for all interested in the vital problems associated with Air Pollution, both in the USA and globally; it is reader friendly and is suitable reading material for both students and officials in government industry. . . . [I]t is very realistically priced, especially for hard cover."—Mervyn Richardson, International Journal of Environmental Studies

"In her scholarly and fascinating book, Morag-Levine mounts a strong challenge against the orthodox view that [the Clean Air Act 1970] marked a great advance in the history of pollution abatement and asserts that the Act has failed to fulfill these initial promises. . . . The great strength of this book is its reliance upon historical and political sources in addition to legal ones; this provides insights and nuggets of historical detail which could not be gained through a strictly legal analysis of the materials. . . . [T]here can be no clearer exposition of the manner in which domestic legal traditions combined with social, economic, political and historic factors serve to mould regulatory responses to pollution."—Mark Wilde, Journal of Environmental Law

"[Noga Morag-Levine] presents one of the first book-length studies of legislative failure that ascribes such a failure to conceptual, rather than political, causes. . . . Chasing the Wind is an important study of the Clean Air Act, with a great deal of information about the origins of the Act, its performance, and alternative approaches that might lead to greater success."—Edward Rubin, Law and Social Inquiry

"This work is highly recommended for all interested in the vital problems associated with air pollution, both in the USA and globally; it is reader friendly and is suitable reading material for both students and officials in government and industry."—Mervyn Richardson, International Journal of Environmental Studies

"No other book so thoroughly weaves together themes in common-law nuisance, federal pollution legislation, local pollution control, and even constitutional law. Morag-Levine manages to tell a story about how all of these various strands fit together that is at once persuasive and interesting, not to mention carefully documented and painstakingly argued. I learned a great deal reading this book, and I will think differently about the field of air pollution control as a consequence."—Lisa Heinzerling, Georgetown University

"An exceptionally thoughtful study of air pollution regulation, Chasing the Wind provides a magisterial account of the tensions embedded within American environmental law and their historical roots. Noga Morag Levine shows us that the present state of environmental regulation is much more a creature of the distant, common law past than has generally been acknowledged. This is both a surprising and important argument."—Cary Coglianese, Harvard University