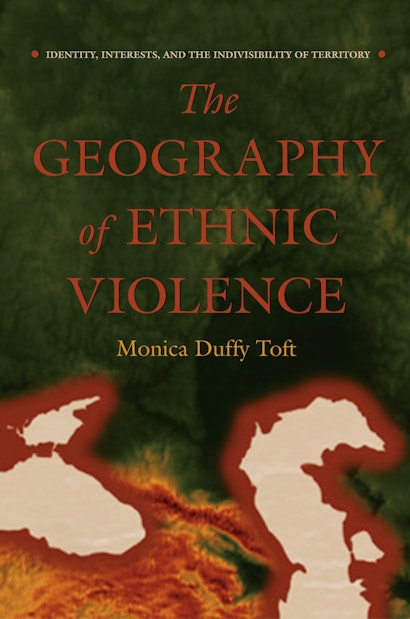 The Geography of Ethnic Violence is the first among numerous distinguished books on ethnic violence to clarify the vital role of territory in explaining such conflict. Monica Toft introduces and tests a theory of ethnic violence, one that provides a compelling general explanation of not only most ethnic violence, civil wars, and terrorism but many interstate wars as well. This understanding can foster new policy initiatives with real potential to make ethnic violence either less likely or less destructive. It can also guide policymakers to solutions that endure.


The book offers a distinctively powerful synthesis of comparative politics and international relations theories, as well as a striking blend of statistical and historical case study methodologies. By skillfully combining a statistical analysis of a large number of ethnic conflicts with a focused comparison of historical cases of ethnic violence and nonviolence — including four major conflicts in the former Soviet Union — it achieves a rare balance of general applicability and deep insight.


Toft concludes that only by understanding how legitimacy and power interact can we hope to learn why some ethnic conflicts turn violent while others do not. Concentrated groups defending a self-defined homeland often fight to the death, while dispersed or urbanized groups almost never risk violence to redress their grievances. Clearly written and rigorously documented, this book represents a major contribution to an ongoing debate that spans a range of disciplines including international relations, comparative politics, sociology, and history.

"An important contribution to the literature on the origins of violent ethnic conflict. The author's explanation is compact, straightforward, and elegant."—Spencer D. Bakich, Virginia Quarterly Review

"[T]he central argument is clear and the book is well written and interesting. . . . I recommend the book to scholars in sociology, international relations, comparative politics, and history who are interested in social conflict and comparative race, ethnicity, and nation."—Robert M. Kunovich, American Journal of Sociology

"Toft proposes a useful theory and adduces convincing evidence on some of the key determinants of severe ethnic violence."—Stuart J. Kaufman, Perspectives on Politics

"Toft makes an important contribution to the literature."—Choice

"Monica Toft makes an important and convincing argument about the power of demographic forces on the chances for ethnic violence. Her statistical findings on the paucity of ethnic violence when urban or dispersed groups are involved are striking. By showing the power of simple structural constraints in the path that leads to ethnic violence, she presents a formidable challenge to those scholars who see ethnicity as constructed, fluid, and infinitely malleable. Her statistical tests and case studies represent an imaginative use of data, and will generate much debate."—Roger Petersen, Massachusetts Institute of Technology, author of Resistance and Rebellion

"This very well organized and well-written book is unquestionably a significant contribution to the study of ethnopolitics and political conflict. It calls attention to the central importance of territoriality in our understanding of where and why separatist conflicts arise and, perhaps more importantly, it shows how contending conceptions of territory affect the dynamics and outcomes of such conflicts."—Ted Robert Gurr, University of Maryland, author of Peoples Versus States