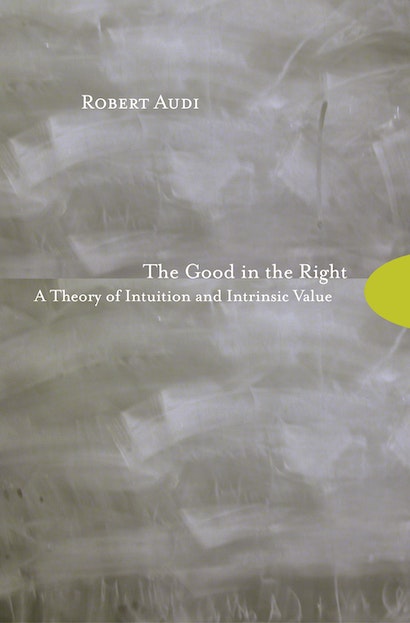 This book represents the most comprehensive account to date of an important but widely contested approach to ethics — intuitionism, the view that there is a plurality of moral principles, each of which we can know directly. Robert Audi casts intuitionism in a form that provides a major alternative to the more familiar ethical perspectives (utilitarian, Kantian, and Aristotelian). He introduces intuitionism in its historical context and clarifies — and improves and defends — W. D. Ross’s influential formulation. Bringing Ross out from under the shadow of G. E. Moore, he puts a reconstructed version of Rossian intuitionism on the map as a full-scale, plausible contemporary theory.


A major contribution of the book is its integration of Rossian intuitionism with Kantian ethics; this yields a view with advantages over other intuitionist theories (including Ross’s) and over Kantian ethics taken alone. Audi proceeds to anchor Kantian intuitionism in a pluralistic theory of value, leading to an account of the perennially debated relation between the right and the good. Finally, he sets out the standards of conduct the theory affirms and shows how the theory can help guide concrete moral judgment.

The Good in the Right is a self-contained original contribution, but readers interested in ethics or its history will find numerous connections with classical and contemporary literature. Written with clarity and concreteness, and with examples for every major point, it provides an ethical theory that is both intellectually cogent and plausible in application to moral problems.

Robert Audi is Professor of Philosophy and David E. Gallo Professor of Business Ethics at the University of Notre Dame. He is the author of many books and articles in ethics, including Practical Reasoning and Moral Knowledge and Ethical Character, and is Editor in Chief of The Cambridge Dictionary of Philosophy.

"This unique and fascinating endeavor is required reading for anyone interested in intuitionism, in moral epistemology, or, indeed, in ethical theory today."—Jessica Prata Miller, Philosophy in Review

"Robert Audi's magisterial The Good in the Right offers the most comprehensive and developed account of rational ethical intuitionism to date."—Roger Crisp, St. Anne's College, University of Oxford

"This is an excellent book. Far reaching in import, it develops a convincing alliance between an intuitionist approach to moral epistemology and a Kantian treatment of moral theory."—Hugh J. McCann, Texas A&M University

"Among Audi's many mighty achievements in this rewarding book, two are especially illuminating to me: his brilliant analysis of the separable elements of classical intuitionism and his formulation of a moderate vision of intuitionism, which neatly avoids the problems afflicting its distinguished forebears."—Betsy Postow, University of Tennessee

"The Good in the Right will end up being thought of as one of the most important books in moral philosophy published in this decade. In my view, the fate of Kantian ethics hangs on the force of Audi's arguments."—Brad Hooker, University of Reading, author of Ideal Code, Real World

"This is a remarkable book—remarkably ambitious, remarkably successful. It is a work of extraordinary scope and depth. Audi offers an attractive account of moral epistemology that provides him with the means to mine a variety of normative ethical theories, extract what is most promising in them, and combine these elements into a new theory that is both coherent and novel and is readily applicable to a host of problems in practical ethics. The upshot is a highly original and powerful theory of morality that is both theoretically and practically appealing."—Michael J. Zimmerman, author of The Nature of Intrinsic Value and The Concept of Moral Obligation